How to Play Baccarat

The goal of Baccarat is to get a hand with a value of as close to nine as possible. Hands which have a value of eight or nine using the first two cards are considered a natural hand. If the first two cards total eight or nine, no more cards are dealt. Unlike other casino games, players can choose whether they want to bet on the player hand or the bank hand. There is also a tie bet, which pays much better than the other two bets. A tie bet pays 9:1 or 8:1, depending on the casino.

The rules for dealing and hitting are somewhat complicated, but you don't have to learn them in-depth, because all the rules are automatically in play. Your only choice is which bet to place. All other decisions are determined by the game rules. 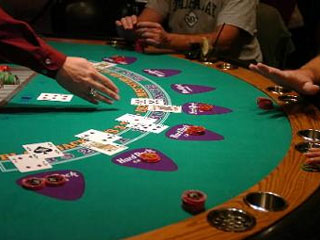 The number cards are counted at face value in Baccarat. Ace is counted as one. Face cards have a value of zero.

The values of the cards are added. If the value is higher than nine, the first digit is dropped. For example, a hand of 8,3 has a value of 1, not 11.

First, all players place their bets. Next, both the player hand and the dealer hand receive two cards each. In real casinos, sometimes there are as many as three player hands, but online, there is usually only one player hand to bet on. The cards are dealt face up. If either player has a natural – a hand totaling eight or nine, then the hand is judged immediately. Nine is better than eight, and if both have the same value hand, then any player who has bet on either hand loses. Only players who have bet on the tie win in this case.

If neither player has a natural, there are specific rules for whether or not a hand receives a third card.

If the player hand has a value of five or less, the hand receives a third card.

If the bank has a two card total of three, a card is added unless the player's third card was an eight.

If the bank has a total of four, the banker receives an extra card if the player's third card was 2-7, inclusive.

For a total of five, the banker hand receives a third card if the player's third card was 4-7, inclusive.

If the bank hand was a six, the banker receives an extra card only if the player's third card was six or seven.

Once both hands have been given their cards, the hand with a total closer to nine is the winner. If there is a tie, players who bet on a tie receive a payout of eight to one or nine to one depending upon the casino.

In some land-based casinos, there are three player hands for every dealer hand. In this case, players may bet on any or all of the player hands separately. Generally, in online casinos, play is against a computer program, and there is no dealer, nor are there other players.

Baccarat - What it Takes and Doesn’t Take to Win

IGT Rolls Out Live Electronic Table Games for the Bellagio