NOTE: This is the first in a series of articles, each focused on a particular blackjack hand. These articles are written for both intermediate and advanced players. The counting system used throughout this series is Hi-Opt I unless otherwise indicated (3, 4, 5, 6 value +1; 10’s value -1; Ace, 2, 7, 8, 9 neutral).

This bad boy is either the first or second worst hand in blackjack, depending on whether the dealer hits soft 17 or not. To make matters worse, it is a fairly common hand. You will be dealt a 2-card 16 vs. dealer 10 about once every 54 hands, not including those occasions where the dealer has the blackjack. This is the hand that built Las Vegas. If you play simple Basic Strategy and could somehow avoid this hand forever, the house edge would actually be reversed in your favor. But dream on. To start the analysis of this hand, let’s first take a look at the special case of a pair of 8’s vs. dealer 10. Here are the HIT, STAND, and SPLIT curves vs. running count (Hi-Opt 1) with one deck remaining (exactly 52 cards). To keep it simpler, let’s assume Double After Split (DAS) is allowed, which is fairly standard in Las Vegas today. 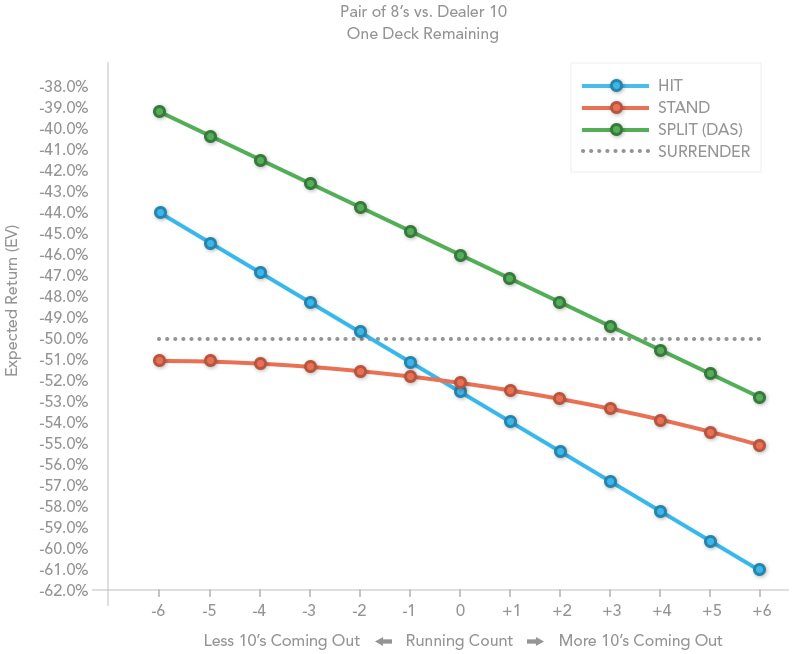 First of all, notice that as the count increases, your expected return is diminishing for all your options (except Surrender). If the count is +4 or higher, Surrender is the best option if allowed. Second, it is clear that splitting the 8’s is a much better option than hitting or standing, within the normal radar range on the count. To be clear, the EV calculation for pair splitting is based on the original bet only. For example, let’s suppose you were faced with this scenario 100 times:

Here would be your final bankroll expectation after 100 hands:

Clearly, the best long term decision is to split your 8’s vs. the dealer 10. Now, if you were to plot a bell curve on the actual returns, you would see much more volatility (wider range) when you split. For this reason, there is a notable blackjack “expert” who claims it is better not to split the 8’s vs. 10. I agree with the Wizard of Odds on this one and you should avoid that bad advice. Yes, it sucks when the dealer exposes another 10 underneath and you lose both hands, but that happens only about 31% of the time (it only feels like 90% of the time).

So here is the correct play for the pair of 8’s vs. dealer 10 if Surrender is allowed:

And here is the correct play for the pair of 8’s vs. dealer 10 if Surrender is not allowed:

Since we will be splitting (or surrendering) the 8+8 vs. 10, we will not consider that variant when we calculate the HIT/STAND decision for hard 16 vs. dealer 10. Here are the EV curves for the combined probabilities including 10+6 vs. 10 and 9+7 vs. 10. 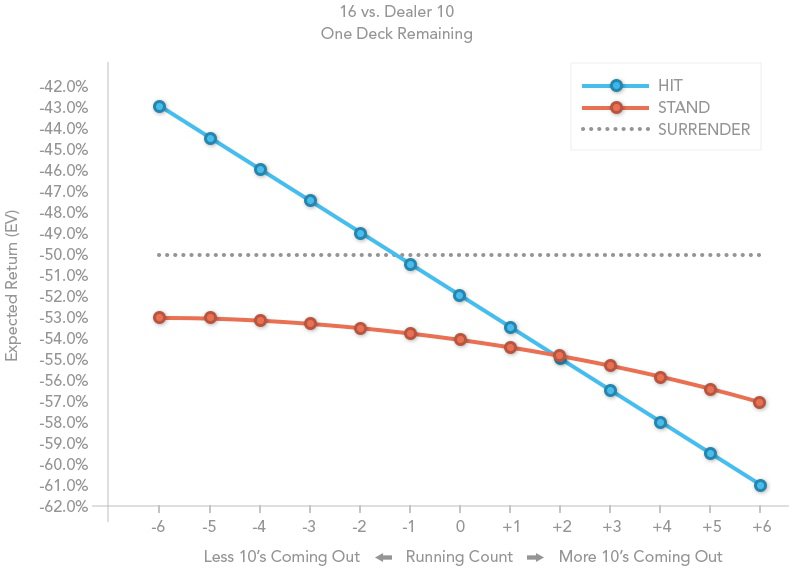 If Surrender is allowed, hard 16 vs. 10 should be HIT for negative counts up to -2, then Surrender if the count is -1 or higher. However, a game allowing Surrender is the exception rather than the rule, so normally you will need to make the HIT or STAND decision. Per Basic Strategy, with a neutral deck the proper play is HIT. However as the deck gets richer in 10’s, there is a flipping point where the better play flips from HIT to STAND. As seen in the graph, the flipping point for hard 16 vs. 10 is +2.

So here is the correct play for hard 16 vs. dealer 10 if Surrender is allowed:

And here is the correct play for hard 16 vs. dealer 10 if Surrender is not allowed:

Now, we could end this here. However, for those who want to chip away at the house edge just a tiny bit more, this is a hand where composition dependent strategy is not all that difficult to remember. So here’s the deal. The graph above is a combined result of the two variants 10+6 vs. 10 and 9+7 vs. 10, based on their frequency of occurring. As it turns out, the 10+6 vs. 10 is a significantly stronger HIT than the 9+7 vs. 10. For those who want to try composition dependent strategy, here are the correct plays assuming Surrender is not allowed:

Note that if the deck was neutral before the deal, then the count for both of these variants is now -1 and both are a HIT as in Basic Strategy. The difference is that the 9+7 vs. 10 flips to a STAND right away as the count moves positive, but the 10+6 vs. 10 remains a HIT until the count is +3 or higher.

One final note. Most Blackjack players realize that 16 vs. 10 is a very close call. There is a common myth at the tables that you should pick your poison. Either always HIT or always STAND, but do not vary. Obviously, advanced play will betray that notion as nonsense. When you get accused of not sticking with one or the other, don’t let it bother you. Just smile and say, “Yep, that’s what they say.”

So for now, have fun, tip well, and may your variances be mostly positive.

Beginner's Luck - Is It Real or Is it a Myth?