To say that online gambling is popular is not exactly surprising!

After all, this is an international multi-billion dollar industry, with roots going back as far as human civilization itself.

But did you know that gambling even impacts the way we communicate with each-other?

That's right! Gaming has been so important to human beings for so long that, whether or not someone has ever set foot in a casino, placed a bet, or even picked up a deck of cards, the way they speak will be littered with idioms that come directly from the gaming floor.

Some of these are obvious, and some are a bit subtler, but all should be familiar to English speakers. They’re heard from senatorial debates to sports announcers and everywhere in between! 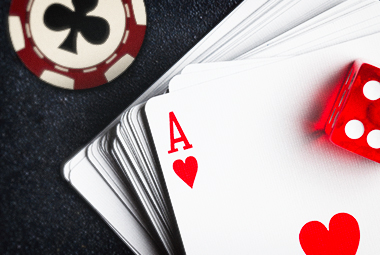 Everyday meaning: An advantage held in reserve until needed

Everyday example: The trial changed completely when the prosecution brought out its ace in the hole: as a surprise witness, the defendant’s own brother would testify against him!

In poker or blackjack, to hold an ace as your hole card is to hold the highest-value card… without your opponents knowing. Since this card is only revealed at the showdown, spectators may see the card as a last-minute revelation, even if the player has held it throughout the hand.

This term is often used interchangeably with “an ace up one's sleeve,” which of course has a very different meaning at the card table… cheating!

Everyday example: With the two candidates nearly tied and 99% of votes counted, it looks like this election will go right down to the wire.

This comes from horse racing (itself an ancestor of modern sports betting), all the way back in the 19th century.

Back then, an actual wire was sometimes slung above the finish line, to help the judges decide the outcome in close races. Thus, two horses racing to the finish line were therefore literally running down to the wire!

Everyday meaning: To risk everything on one outcome

Everyday example: As your investment portfolio stands, you’ve really bet the farm on cryptocurrency… as your financial advisor, I’d recommend at least some diversification.

It’s hard to imagine today, but back in the early 20th century, it wasn’t uncommon for gamblers to make wagers far greater than what chips or cash they had on the table. As such, a poker player who wanted to raise but had no more money with them could verbally risk their other assets, including real estate!

A verbal contract would be considered completely binding, so to “bet the farm” could really mean to risk homelessness! 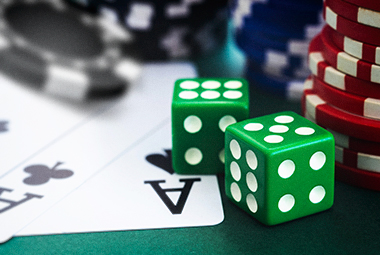 Everyday meaning: No way; no how; absolutely not; under no circumstances

Everyday example: After making big moves in the off-season, many commentators were expecting the Boston Red Sox to dominate their division this year. No dice – they’re 12 games behind, and it’s only June!

Gambling meaning: In the early 20th century, gambling with dice was illegal in many areas, with strict punishments enforced. Therefore, when challenged by police, players would go to extreme measures to hide their dice, as judges would often throw out their case if such evidence were not produced before the court.

More than one player was shown to have swallowed their dice to avoid arrest!

Everyday example: The job is yours. We can offer a base salary of $65,000 per year, with a company car and some vacation days thrown in to sweeten the pot.

Plenty about the game of poker is unique among casino games, but perhaps the most distinctive feature is that players are trying to win each-other’s money, not the casino’s! And the more money players have put in the pot through bets, the bigger the potential win.

As such, a smart player will be more likely to call a bet that has been called by several other players, since the pot has been ‘sweetened’ by many called bets already.

Everyday meaning: To protect oneself against loss by supporting more than one possible outcome; to minimize risk; to avoid committing oneself to a single course of action

Everyday example: Jimmy didn’t hedge his bets – he came right up to the girl he liked and told her how he felt, right there in front of the whole school!

This is one of the oldest gambling idioms out there, dating all the way back to the 1600s. Shakespeare even included it in The Merry Wives of Windsor!

By referencing hedges – fences made by rows of bushes or trees – a farmer’s term was applied to wagers when gamblers would make a large bet on one side to win, while also placing a smaller bet on the other side!

Everyday meaning: Weighting a situation until it unfairly favors (or burdens) a single party.

Everyday example: “All the trains are running late today, and now it looks like I’ll be late to the meeting even though I left an hour early! It feels like the deck is stacked against me.”

With modern gaming regulations stronger than ever, cheating doesn’t have to enter into modern players’ thinking all that much. Back in the day, however, gambling dens were famously rife with cheating.

One particularly nefarious way to cheat was to ‘stack a deck:’ that is, to arrange the deck of cards in such a way so that one player would be guaranteed to win big. It was dangerous, and it wasn’t easy to do, but when done well, cheaters could really prosper this way. 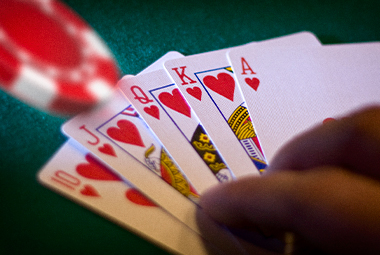 Everyday meaning: To get the best possible outcome in a given set of circumstances.

Everyday example: “This university is really interested in having you come and play for their varsity tennis team! If you play your cards right, this could mean a full scholarship!”

Particularly in the game of poker, having the winning hand isn’t enough to guarantee a big payday. Opponents must be induced to bet against you, or to call your bets, or nothing will be gained… and convincing them to do so is the key to big wins! This subtle skill is called ‘playing your cards right.’

Everyday meaning: The situation has changed so much that its outcome is impossible to predict.

Everyday example: The merger looked like it was going forward, but now it looks like all bets are off until the independent audit is complete.

Gambling meaning: Originally from horseracing, this was a term used by bookmakers indicating that no further bets will be accepted on a given race, and/or that all bets already taken are null and void. This may have been due to changes in weather conditions, the race being postponed or canceled, substantial changes in the starting lineup, or irregularities in the race’s conduct.

How to Best Protect Your Data while Playing Online Games

Online Gambling: A Look Into the Future

The Role of Artificial Intelligence in Online Gaming: FAQs

Why Was Bitcoin Market Experiencing Sharp Falls and Sudden Surges in 2021?