Dive into the dead pool

Railroad accidents, gun fights, stomach ulcers, drowning, accidental poisonings – in 1901, these were all pretty common ways men and women kicked the bucket and headed into the afterlife.

And let’s be honest: We’ve all got a dose of morbid curiosity (how else can we explain the popularity of shows like “Dexter” and “The Walking Dead”?).

So we wondered, if we all lived in 1901 – a wild and dangerous time, without modern medicine – how would your odds stack up? What would be your likely fate?

Want to know the most dangerous body part in the early 20th century? Curious to know how you would die if you had been alive in 1901? Read on to find out.

Your Odds of Death in 1901: INTERACTIVE

Would you, like cowboy and outlaw Tom “Black Jack” Ketchum, die by hanging? Perhaps you’d meet your fate on the business end of a gun like President McKinley? There’s always the odd poisoning death to worry about too, like the victims of serial killer Jane Toppan. Or maybe you’d be a lucky one, quietly greeting the Grim Reaper via old age and departing this world in your sleep.

Enter your age and gender above. Click the calculate button to find out how you would likely kick the bucket if you’d been born in a wilder, less technologically advanced era.

Most Common Fatalities in 1901 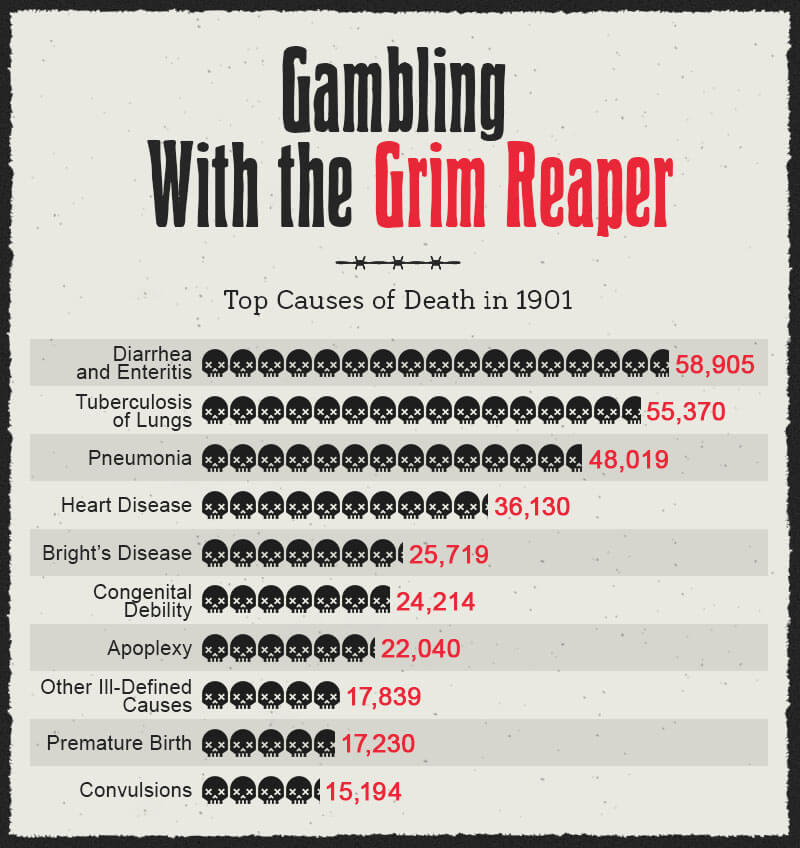 During this year, diarrhea and enteritis (or inflammation of the small intestine) were the biggest killers – almost 59,000 people horribly died this way. Closely behind, tuberculosis of the lungs – synonymous with death – took about 55,000 lives. It was estimated that 110,000 people died each year from tuberculosis in the 1900s due to overcrowded tenements and poor hygiene.

Pneumonia claimed 48,000 people, while heart disease took about 36,000. And the most tragic loss of life? The more than 24,000 babies who died from congenital debility. 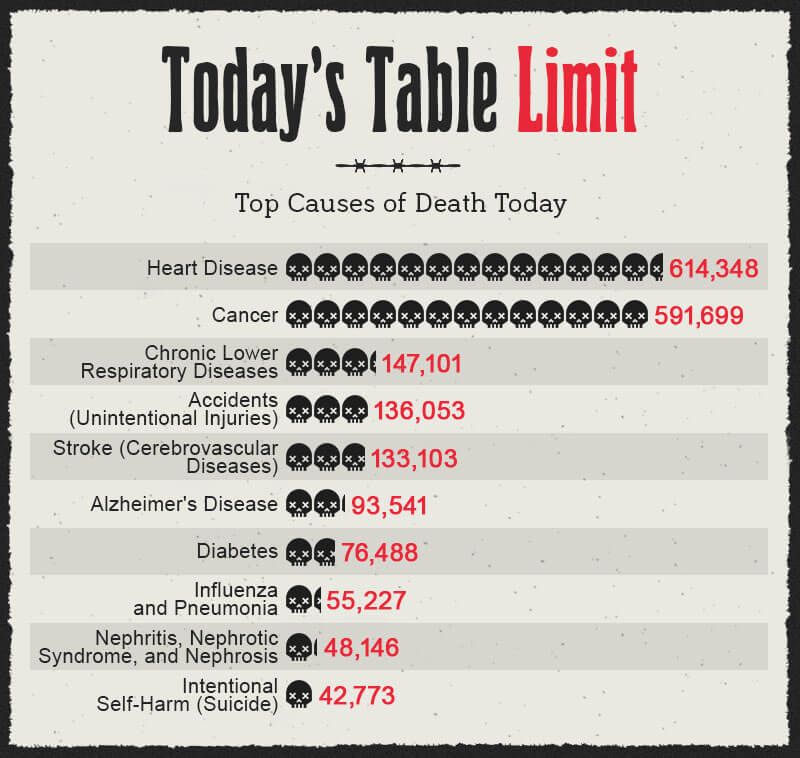 How do the major causes of death in 1901 compare with those today? Do we still suffer from the same afflictions? While heart disease over a century ago was the fourth-leading killer, it is the leading cause of death today. In 2014, 614,348 people died from this silent reaper.

And even though heart disease doesn’t discriminate between men and women, or people of different ethnicities, there are three key factors that contribute to this disease: high blood pressure, high cholesterol, and smoking. Cancer didn’t even make the top ten list in 1901, but as of today, it is the second-leading killer. Almost 600,000 died from it in 2014.

Surprisingly, pneumonia and influenza are still alive and kicking; they are responsible for 55,227 deaths. But causes of death, such as Alzheimer’s disease, diabetes, and chronic lower respiratory diseases, have come to replace more primitive threats.

Most Common Accidental Fatalities in 1901 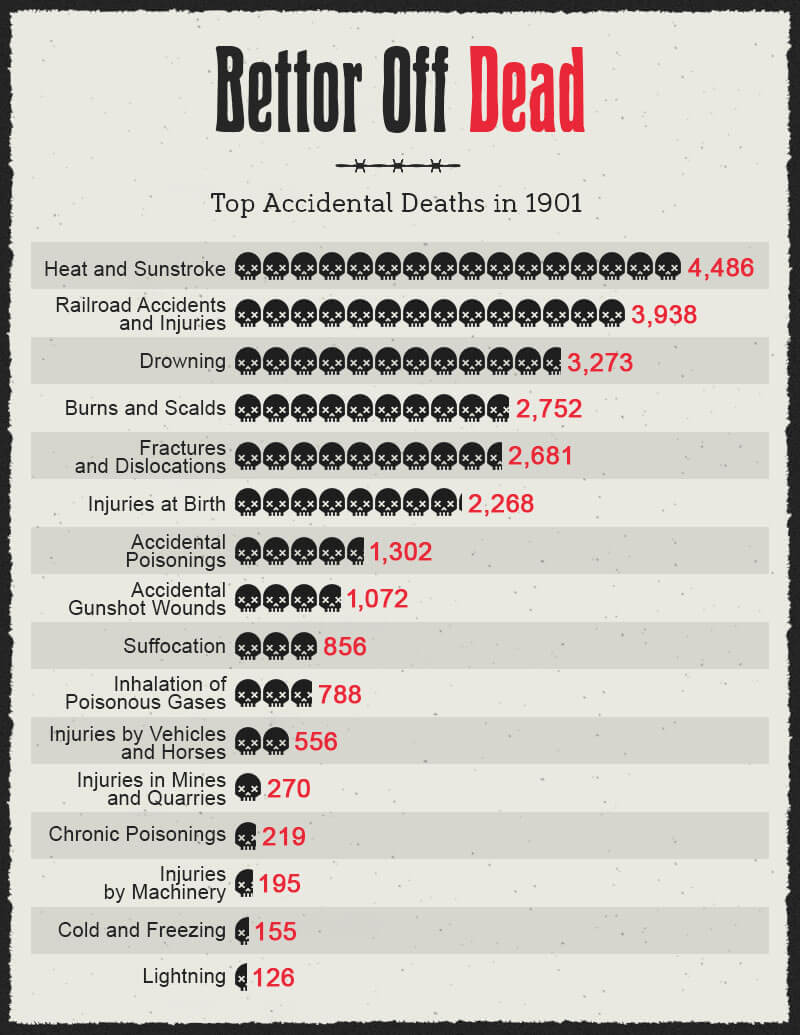 From gunshot wounds to drownings to suffocation, 1901 had plenty of accidental deaths to go around.

So what were the most common ways to unwittingly bite the dust? If you’re a gambler, we suggest betting on heat and sunstroke. Perhaps the lack of air conditioning contributed to fatality rates? During 1901, 4,486 people unfortunately overheated.

Railroad accidents and injuries were the second-leading causes of accidental deaths (3,938), especially in 1901 when the American Locomotive Company was formed. People at this time could also expect to die from unintentional drownings (3,273), random burns and scalds (2,752), unforeseen fractures and dislocations (2,681), and unexpected birth injuries (2,268). Although it’s rare today, getting struck by lightning (126) also made the list as a sure way to end up dead as a bolt-attracting doornail. 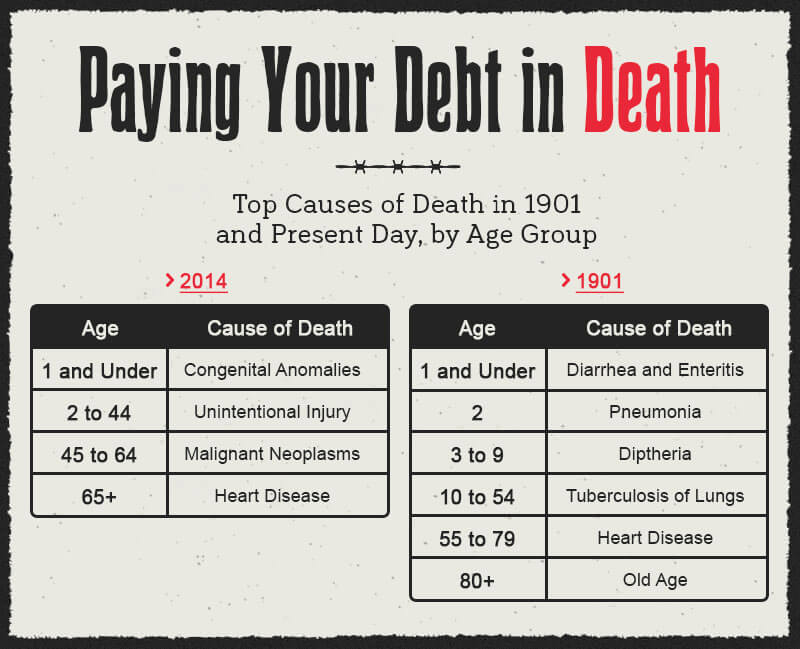 If you somehow lived to the old age of 80 in 1901, it was a miracle. But today, not so much. When we looked at the top causes of death by age group, there were a few major differences between 1901 and today.

In 1901, babies were more susceptible to diarrhea and enteritis. Small children, on the other hand, were often the unfortunate victims of diphtheria and sometimes tuberculosis, while those who made it into their 50s had more to fear from heart disease and, if they were lucky, old age.

Today, we’ve conquered some of those scary childhood diseases. Children are in less danger from diphtheria and more likely to die from congenital anomalies and accidental injuries. As for those in their 50s? Malignant neoplasms (tumors) are a bigger threat, while those aged 65 and older should probably be somewhat concerned with heart disease.

Lucky to Be Alive

It’s no surprise that living in 1901 was a gamble. These days, we’re far less likely to take a dirt nap after a railroad accident or meet up with the angel of death due to a curable, preventable disease like tuberculosis or diphtheria.

Which is why we have the luxury of being curious about our own 1901 deaths. Would we bite the dust in a Wild West shootout? Be hanged by the neck for our outlaw ways?

Luckily, we’ll never really know. We can only calculate our odds, bet on the most likely fate, and keep living in a world where our life expectancy has gained about 30 years.

We analyzed historical data from the Centers for Disease Control and Prevention to determine the causes of death in 1901 and those near present day (2014).

You can share the images above, but please be kind, and link back to this page so the creators receive credit.