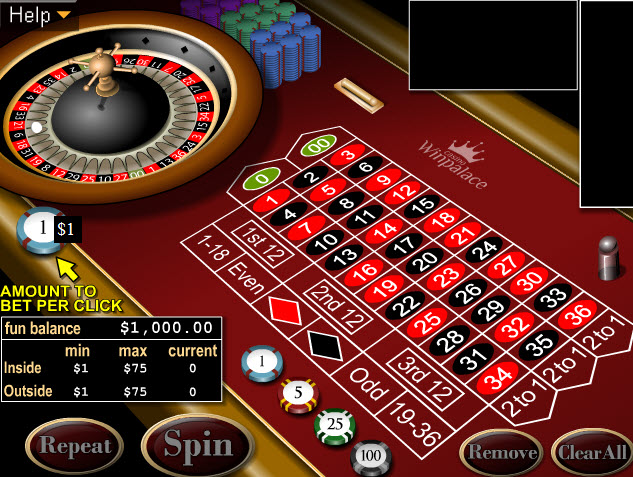 Real Time Gaming is the most popular online casino platform that is available to U.S. players. The company has more than 15 years of gaming experience. Its software is fast with crisp animation. The game speed may be set to turbo for players that prefer to see the results instantly or watch the wheel in action as you cheer for your winning number. A rebet button is available to place the exact wagers made during the previous spin or make new ones manually each time. Sound may be turned off or on in the options tab.

The minimum bet at Real Time Gaming roulette is $1. The maximum amount is typically $500 for outside bets. The amount may be lowered for inside bets. The chip denominations available are $1, $5, $25, and $100.

Players in U.S. will be most familiar with the American Roulette wheel. It is common in Las Vegas, Atlantic City, and regional casino markets. It offers 36 numbers and two green zeros. The house edge on most bets is 5.26%. The exception is the five-bet. This wager includes 0, 00, 1, 2, and 3. The edge house advantage on this game is 7.89%. The five-bet is unique to American Roulette due to its double zeros.

The European Roulette wheel is nearly identical to the American one. It also spreads 36 numbers, however, it has just one zero.

Real Time Gaming's European Roulette does not offer the la partage rule, which returns half of the wager when the ball lands in the 0 well. This game follows the rules of most games referred to as Single Zero Roulette games in the U.S.

Can Roulette Be Fallible?