How to Play Sic Bo

Today finds online gaming to be an extremely popular and flourishing industry. It is a heady combination of entertainment, risk and of course the chance to make lots and lots if money. Both land and online casinos are constantly widening their circles by bringing in new games or rather taking in ancient games belonging to various cultures and implanting them. Sic Bo is one of these games and has become very popular with the gaming crowd of today. Easy to learn, with its simple rules and large scope to make some big money Sic Bo is fast becoming a house favorite with many online gamers. 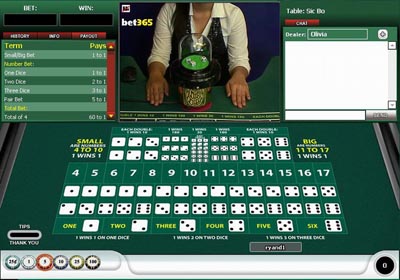 Sic Bo is both a fun and interesting game, not to mention an easy way of making money! The game finds its origin in the early Chinese civilizations, where three dice were used in play and bets were placed on the probable resulting combinations. Sic Bo is translated as "Small Big" as both small and big bets or wagers can be placed on the game. Also known as "Lucky Dice", this game has found its way into the gaming circles of today and is making big waves in both the arenas of land casinos as well as online casinos.

In Sic Bo, a player is faced with a table-like setting of various dice combinations and has to make a guess on the outcome of the roll of the three dice. He may make either small or big wagers as desired and place his bet on either a single dice or two or all of the three dice. It is also possible to bet on selected numbers and combinations of numbers. The game is very clearly laid out and is easy to pick up. Fortunately, or unfortunately for some, there are no tricks to this game. It is a combination of sheer chance and good wagers. For many, Sic Bo is considered to be gambling in its truest form.

When a player wishes to try his hand at Sic Bo, he merely has to go to the gaming zone and make his selection from the various combination options of the possible outcomes as offered to him on the table. He then picks his chips, which is the type of coin he wishes to play with depending on the depth of his pocket and goes on to place however much of it he wishes to bet on his selection. He proceeds to start the game by pressing the 'Roll' button which sets off the three dice into motion. The three dice are enclosed in either a sort of metal cage or glass dome and they roll for a few seconds after which they stop automatically. Winning combinations light up correspondingly and the winnings get automatically credited into the players account. Sic Bo players have the option of either starting an entire new game of Sic Bo by clearing the table or repeat their play by betting on the same combination as before. It is only a matter of pressing either the 'clear' or 'repeat' buttons respectively. However, if a player has accidentally cleared his table when he wished to repeat his bet, he may rectify his mistake by pressing on the 'undo' button. 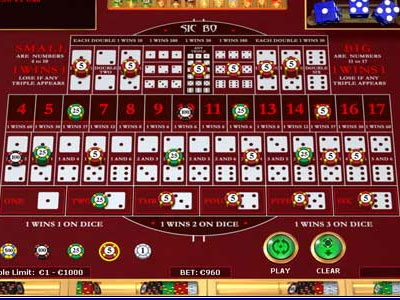 Bets can be placed on various combinations as per the players' whims and fancies. However it is important to check the odds for specific combinations in the casino before playing as it increases one's knowledge and betters the chances of success.

Bets can be placed by choosing a single number that should appear on any one of the dice, or any two of the dice or all three of them. You can also bet on two different numbers.

'Small' and 'Big' type of bets are placed based on the sum of the outcome. Similarly there are various other types of bets for players to choose from and wager on making Sic Bo a very interesting game.

Sic Bo can be said to be the simplest game in the casino area today, and its great money-making potential and entertainment value just add to the wonder that is Sic Bo.