Would You Risk It Lp

Incentives, such as money or other rewards, are routinely used to influence people’s risk-taking behaviors. The exchange of human decisions and their associated incentives has long been a subject of study among psychologists, sociologists, and economists. This research is typically directed toward developing an understanding of how people can be encouraged via rewards and penalties to engage in desired behaviors. For instance, researchers may seek to determine the best incentives for promoting workplace safety or discouraging the public from smoking.

But it isn’t easy to determine a person’s motives in a given situation. Some attempts at influencing human behavior will fail due to complex social, psychological, or environmental factors that weren’t considered. Others may even backfire and nudge people toward a behavior that was meant to be discouraged.

While the effects of these rewards and penalties are studied in the context of long-term trends in decision-making among a large population, we decided to study the role of rewards in something different: split-second decisions and acts of heroism in life-threatening situations.

In our survey of more than 2,000 Americans, we asked how likely they were to put their life in jeopardy to save another in a variety of possible circumstances. We observed how their behavior varies depending on demographics, relationship to the person in danger, and whether a monetary reward is provided for heroic acts. If you’ve ever wondered why some people are risk-takers and others aren’t, or why some are willing to step in while others step back, read on and learn about the human nature of difficult choices.

WHO'S MORE LIKELY TO BE SAVED? 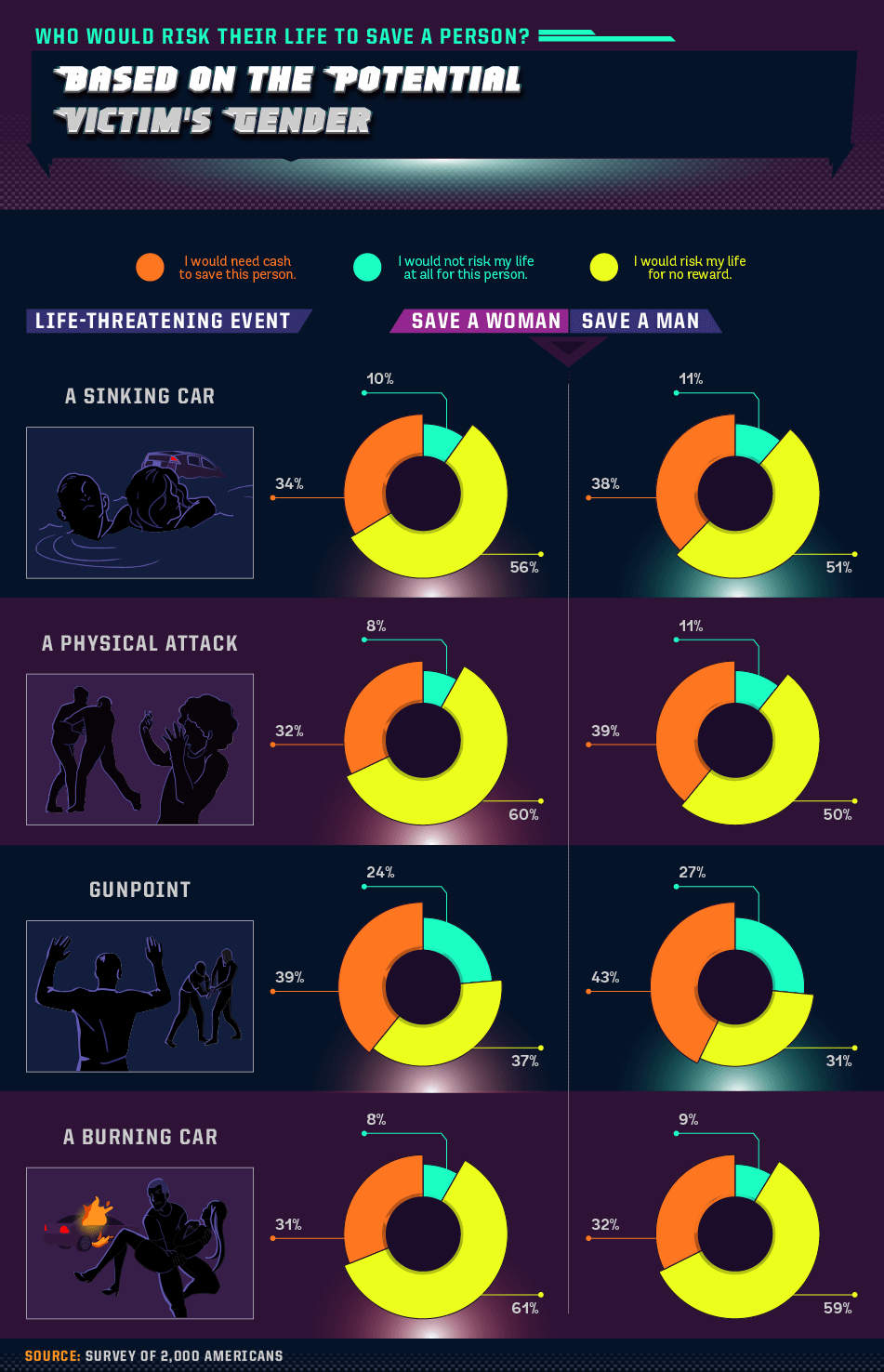 We first asked respondents whether they would risk their life for another person in four different situations: from a sinking car, physical attack, gunpoint, or a burning car. Participants were then given the option to either intervene without a cash reward, for a cash reward, or refuse to intervene regardless of reward.

Based on the gender of the victim, we found a small, but consistent, difference between men and women. In all four scenarios, women were slightly more likely than men to be rescued without any expectation of a reward, while a cash reward was more likely to be needed to save a man, although more people indicated they would not intervene for a man under any circumstance.

This general trend held true for the remainder of scenarios, except for someone held at gunpoint. Respondents appeared to perceive this as a more dangerous situation, even greater than an unspecified physical attack. Thirty-nine percent would need a cash reward to step in for a woman, and 43 percent would require the same for a male victim, while only 37 percent and 31 percent would assist a woman or man, respectively, for no reward.

WHEN PEOPLE ARE MOST LIKELY TO INTERVENE, BY PERSONAL RELATIONSHIP 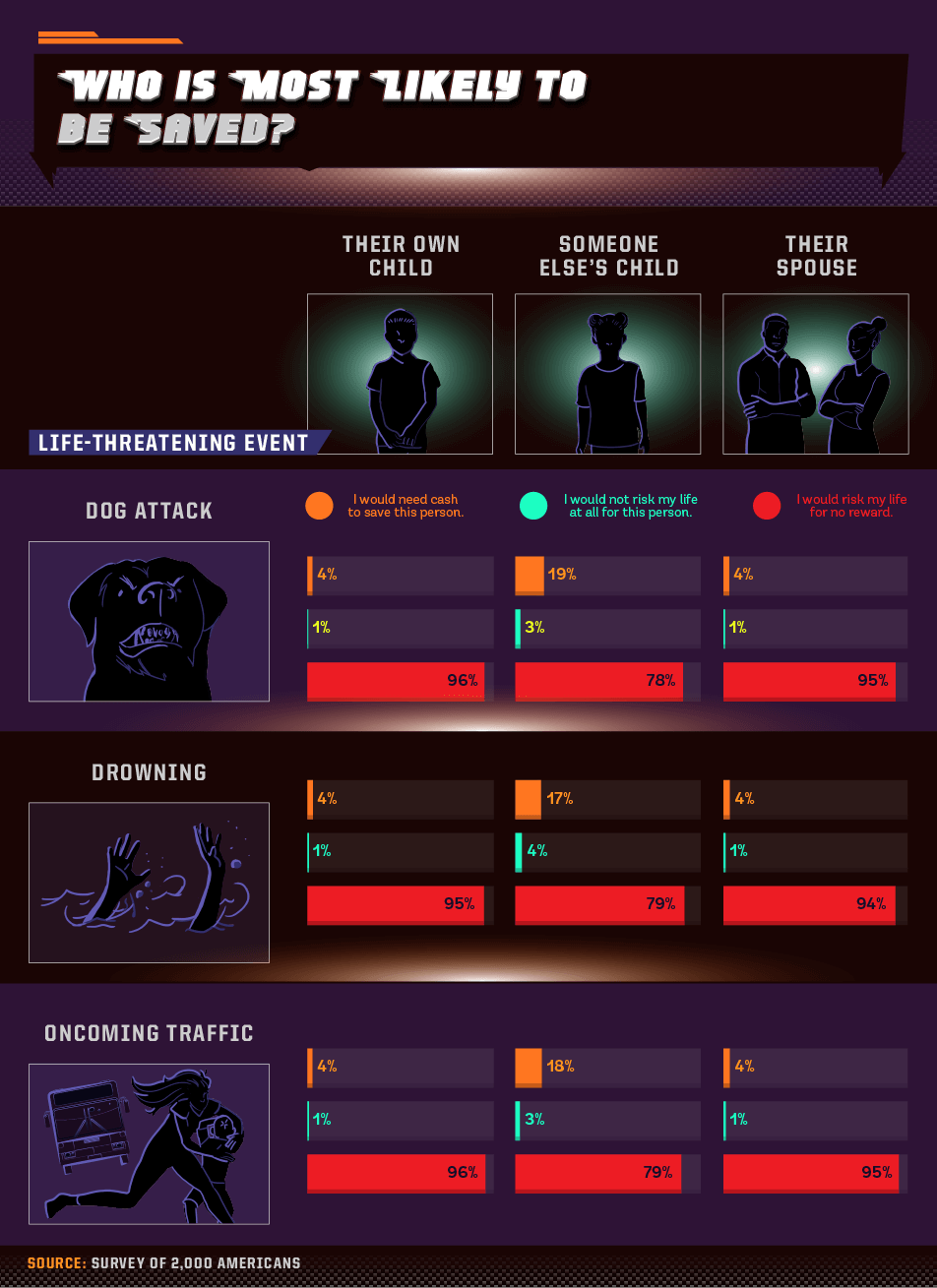 We then looked at how respondents’ decisions in dangerous situations vary based on the person whose life is in danger and asked them whether they would step in to save their child, their spouse, or someone else’s child. For two of these possibilities, the response was overwhelming. More than 95 percent said they would save their child from a dog attack, drowning, or oncoming traffic, with no expectation of a reward. Very similar figures were found for rescuing one’s spouse in these scenarios.

These stark differences illustrate just how much people tend to value those close to them. This can be explained in part by the principle of kin selection. Throughout human history, a person putting their life at risk to save someone close to them, such as their child, may, in fact, be helping to increase the likelihood their genes will be passed on. Over time, this has led to an overall trend toward sociable and altruistic behavior as a widespread behavioral trait that aids the overall survival of a person’s family and close social group.

SAVING A SPOUSE IN A LIFE-THREATENING SITUATION 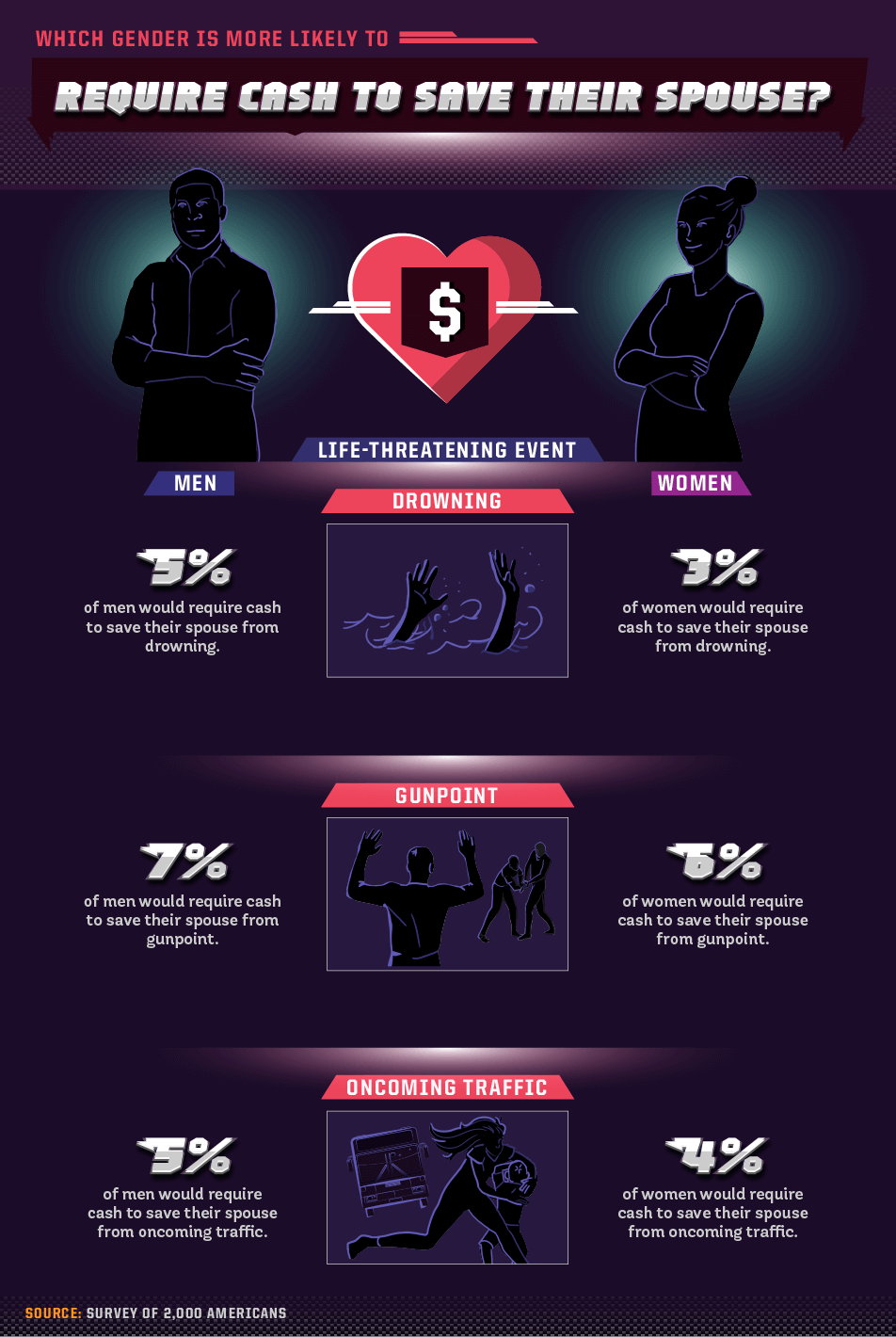 We also looked at whether men and women would want a cash reward to save their spouse from drowning, being held at gunpoint, or from oncoming traffic. Unsurprisingly, the number of people who would only save their spouse in return for a reward was marginal, although small differences between the genders remain.

It turns out, 5 percent of men would seek a cash reward to save a spouse from drowning, while only 3 percent of women would expect a reward in this situation. While similar figures were found for saving a spouse from oncoming traffic, the specific circumstance of a holdup at gunpoint continued to be an outlier here. Seven percent of men and 6 percent of women would only save their spouse in this situation if there were a cash reward for stepping in, likely indicating this is perceived as an especially dangerous scenario. 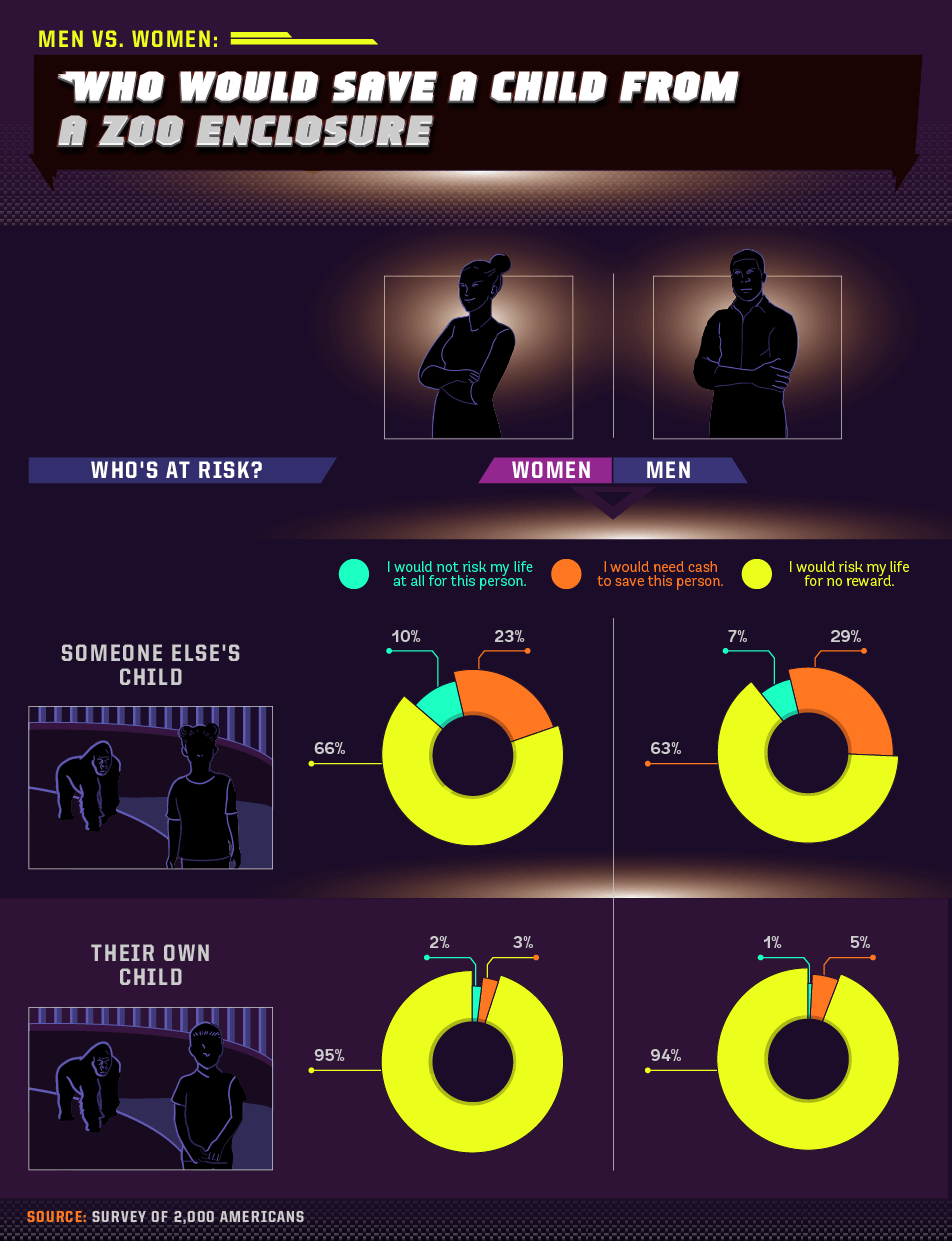 Incidents of small children wandering or falling into zoo enclosures have received increasing attention in recent years. While these rare events have happened in the past, this danger was highlighted last year by the killing of the lowland gorilla Harambe at the Cincinnati Zoo after a 3-year-old boy fell into a moat surrounding the exhibit.

We asked men and women what they would do in a situation where either their child or another person’s child fell into a zoo enclosure. Our participants’ answers strongly differed based on whether the child was their own, and women were overall slightly more likely to intervene.

POLITICAL VIEWPOINTS AND WILLINGNESS TO SAVE OTHERS FROM ATTACK 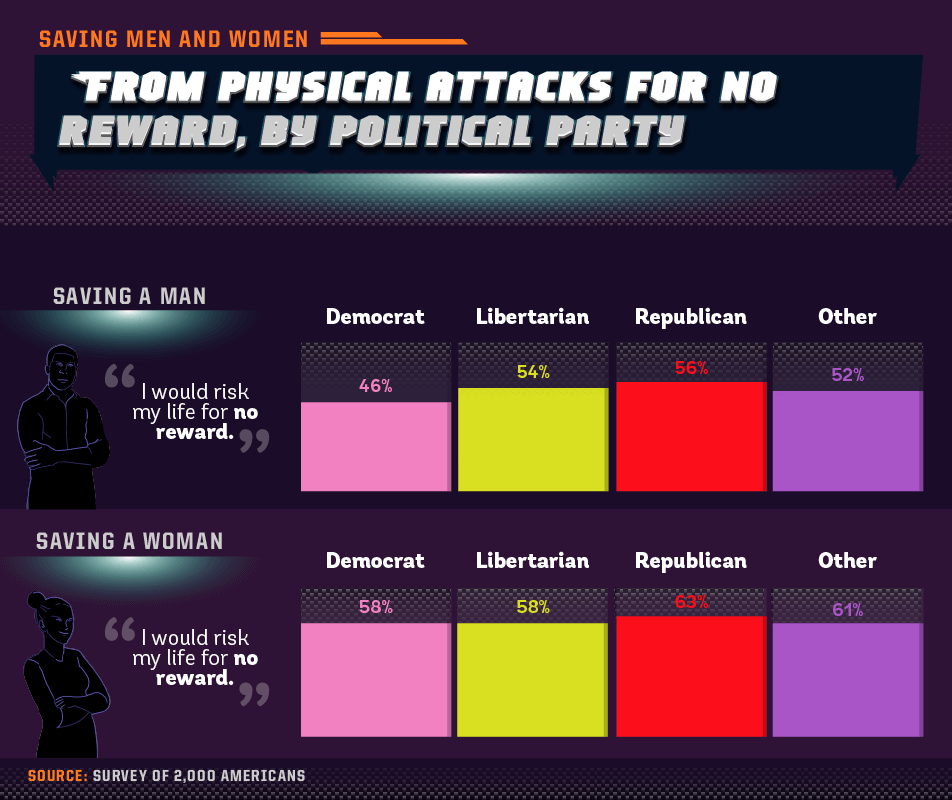 Additionally, we wanted to see how a person’s political alignment tied into their willingness to exhibit selfless or self-sacrificing behavior in a dangerous event. While psychological research into the personalities and tendencies of individuals with differing political viewpoints is ongoing and contentious – and unlikely to be clearly resolved anytime soon – we did find consistent but small differences in responses by those of different party affiliations.

When asked whether they would be willing to save a man from being physically attacked without a reward, those who identified as Republicans were most likely to say yes (56 percent), followed by Libertarians (54 percent). Democrats, however, were least likely to do so – only 46 percent said they would intervene.

Interestingly, when we asked our sample whether they would save a woman from being attacked with no reward, the apparent political gap significantly narrowed. Although 63 percent Republicans said they would step in, the percentage of self-identified Democrats who were willing to intervene rose to 58 percent. This elevation was also seen among those who identified as Libertarians and those who described their political views as “Other.” It’s clear that regardless of political views, a substantial number of individuals across the board are prepared to act selflessly to save the life of another.

FROM BOOMERS TO MILLENNIALS: WHO’S MOST WILLING TO SAVE A LIFE? 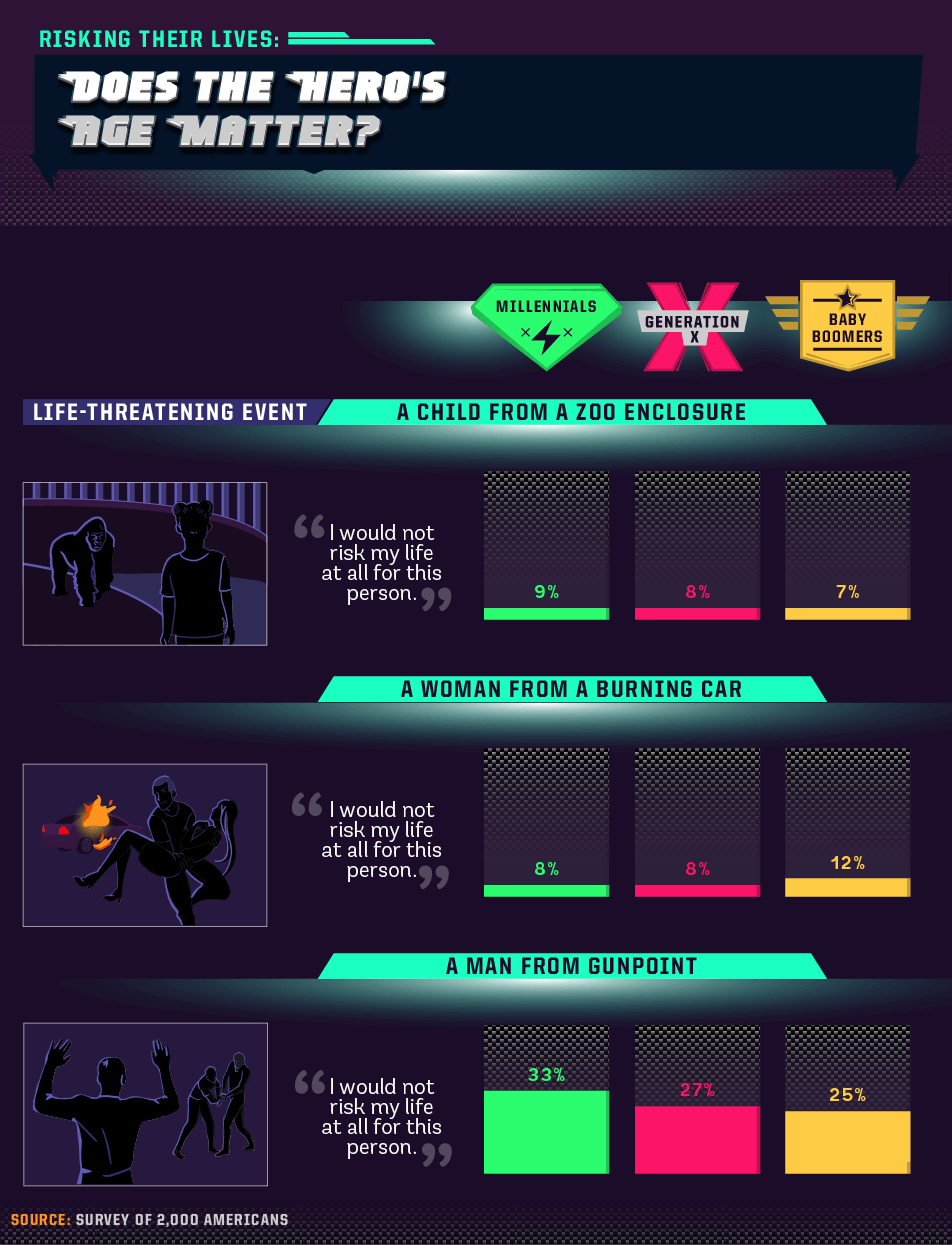 The difference in attitudes and outlooks toward life held by distinct generations in our society has been a subject of discussion for decades, most recently with the increasing examination of how millennials are both alike and distinct from their predecessors. We separated survey responses by participants’ generations – baby boomers, Gen Xers, and millennials – to see how likely each group would be to risk their life in three scenarios.

As we found, distinct generations may indeed be more alike than different. What about those who would refuse to save a child from a zoo enclosure, even if a reward were offered? Boomers made up 7 percent, and Gen Xers weren’t far behind at 8 percent; similarly, 9 percent of millennials would also refuse.

Situational reactions and gains or losses are a normal part of everyday life. As we’ve found, while it may seem odd to associate monetary rewards with heroic choices in life-threatening situations, the addition of a reward does appear to influence our behavior even in the most extreme circumstances. Deciding which levels of risk we’re comfortable with is simply a part of who we are.

If you’re looking to take a gamble on something less dangerous, LatestCasinoBonuses.com features a comprehensive overview of the biggest bonuses and jackpots available on online casinos across the web. With real user reviews and bonuses updated daily, you’ll have no problem finding your best bet. Visit LatestCasinoBonuses.com today, and don’t miss your chance at a stellar payoff.

Our findings and graphics are free to distribute in a noncommercial manner. Just remember – everyone wins when you link back to this page and give full credit to the authors.

We surveyed 2,000 people asking if they would risk their life to save people from various scenarios.