A review of the games and features Caleta Gaming software has to offer and a directory of online casinos that use the software (rated best to worst).
Average game rating

Caleta Gaming has been active since 2013, but for one reason or another kept quite a low profile until 2020 or so. This initial slow build-up has gathered speed like a spaceship in a vacuum and has become quite a steamroller when it comes to embedding title after title into online casinos, and to content providers as well.

END_OF_DOCUMENT_TOKEN_TO_BE_REPLACED

If one had to pick two areas of online casino gaming where the company excels, those would without a doubt be online slots and video bingo. The former might face heavy competition from all around, but when it comes to the latter there is certainly more demand than there is supply. The company operates from Brazil and Gibraltar, with further ties to England, placing it in a very interesting position in the markets. 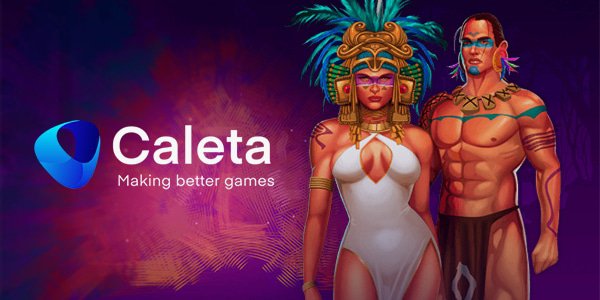 A short history of Caleta Gaming

Although the company can trace its origins back to 2013, such as when the website was reserved, it didn’t really launch until 2017. From thereon they quickly picked up their desired direction, launching lotto, slot and bingo games. It took until 2019 when those games started appearing in impressive numbers, which now keep growing at a steady pace.

But those games that did exist clearly made an impression, as Caleta Gaming started picking up one partner after another soon after their first products were launched. And that’s something that added considerable speed to their rise to fame.

Salsa Technology was one of the few aggregates to pick up Caleta Gaming, no doubt because both are heavily invested in the Latin American markets. Copacabana Gaming, Pariplay, Groove Gaming, MrSlotty, Betconstruct and SoftSwiss soon followed, with the addition of Veneeri as an investment partner greatly bolstering the company.

Some of these names might be completely unknown to you, others represent some of the biggest brands in the industry. What we can tell from all this is that the company is quickly establishing itself across the Americas and Europe, and most likely across the rest of the world too.

END_OF_DOCUMENT_TOKEN_TO_BE_REPLACED

Besides these content platforms, the company has also been busy signing up individual casinos. This includes both the traditional online casinos, and some of the newer ones that concentrate on things like cryptocurrencies.

To be honest, it should come as a big surprise that Caleta Gaming brings plenty of Latino elements into their games, after all the company itself hails (partly) from South America. Another thing to consider is the forays this developer has made into such areas as the Mexican online gaming markets, an area that hasn’t been of such big interest to other great gaming companies in the past.

END_OF_DOCUMENT_TOKEN_TO_BE_REPLACED

It’s especially video bingo titles that have received a look fitting for these new markets. But you will find that slots too take advantage of the mariachi bands passing by. Of course, players are also welcomed to themes that remind us of the warmer southern winds, with golden beaches and plenty of sun heating up the game rounds.

So if you’re looking for a change from all those online slots and other games concentrated in Ancient Egypt, drawing inspiration from Greek gods, or other such themes, here’s an excellent chance to enjoy something completely different.

There’s more to the games than just this…

....with plenty of other themes available too. Remember that Caleta Gaming is also present in Gibraltar, and as such it should come as no surprise that the slots and bingo titles cover themes like Halloween, Irish luck, or draw inspiration from historical empires and events.

On the latter part, you can expect quite a few games that concentrate on the Caribbean and pirates of the old times. A handful of titles go even further, exploring the possibilities of Oriental mythology. Not to mention that the games are obviously available in English and plenty of other languages beyond just Spanish and Portuguese.

What can I expect from the games in general?

If you’re thinking about features and paylines, you can be sure to run into classic setups. Keep in mind though, the company is ramping up their game production as we speak, so they are sure to expand the selection in this area greatly. You will also be glad to know that RTPs from these games aim to surpass the industry standard of 96%.

The majority of their games use the classic slot setup of five reels with the normal paylines running from left to right. There are a handful of titles that go even deeper into nostalgia, offering just three reels with a single payline.

No stranger to bonus features

The company has well noted that players like a bit of extra beyond just watching symbols line up in predetermined lines. Thanks to this, you can expect a great variety of different features and specials. Extra spins show up from time to time, paired up with things like expanding wilds, retriggers, stacked symbols and other bonuses. From time to time you can also enjoy minigames, multipliers and pick-a-win features.

At the moment the company is licensed in the Colombian markets. As their products are available via various methods, such as the many content platforms we have mentioned, it’s obvious that their games function with added licenses and guaranteed from these gaming providers. The individual titles and software behind the games have been tested by the world-renowned BMM Testlabs to conform to all standards.

Check out the 132 found here, which after 6625 LCB member votes, have resulted in an overall rating of 3.2 out of 5. A total of 25 member votes have also generated a 3.68 slots rating on the 9 games reviewed on LCB.

Caleta Gaming has been active since 2013, but for one reason or another kept quite a low profile until 2020 or so. This initial slow build-up has gathered speed like a spaceship in a vacuum and has become quite a steamroller when it comes to embedding title after title into online casinos, and to content providers as well. New Caleta Gaming Casinos for Virginia More... If one had to pick two...
Read more