California is a strange state because there do not seem to be any laws concerning unlawful gambling that could even pertain to online gambling as a player. Obviously, there are a number of laws concerning acting as an operator in terms of online gambling. Relaxed Standpoint California has had a loose stance towards gambling, in general, than some other states, but has not gone all the way with it. California, “Card rooms,” are popular, but even those have a wide variety of laws such that...
Read more

California has had a loose stance towards gambling, in general, than some other states, but has not gone all the way with it. California, “Card rooms,” are popular, but even those have a wide variety of laws such that only cards may be used as a physical implement in gambling. It is for that reason that games such as, “Card Craps,” have come to be...because California cannot use dice.

In terms of restrictiveness, as you can see here, we consider California one of the least restrictive states for online gambling.

The state was one of the major contenders to make a big push towards online gambling, at least in a limited way, with as many as four bills being drafted to legalize and regulate online poker rooms. Those bills, one and all, died a Legislative death (which means they weren’t voted upon by the full Legislature) and what few pushes there have been since, if any, have stalled out pretty early in the process. 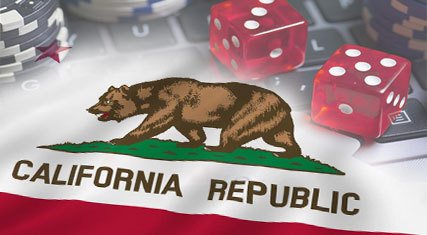 Any laws pertaining to actual restrictions for, “Unlawful gambling,” which would include online, have had to do with operators. Strangely, California is one of the few states that enables its Counties or other Municipalities to enact laws that would make acting as a mere player unlawful. We obviously have neither the time nor inclination to research each individual Municipality, (though it is unlikely any of them avail themselves of this ability, and even more unlikely that they actually enforce it even if they do).

Therefore, we will leave that for if there are any concerns about more localized restrictiveness.

Perhaps the most interesting case in California...

...though unrelated to online gambling, is this one in which a legitimate cardroom acted as a front for unlawful sports wagering, among other things.

California is obviously inclined to take Unlawful Gambling seriously on the operators’ side of things, and it is for that reason that (as with almost every other state) nobody is going to want to operate an online casino out of the state of California.

Neither the state nor the Federal Government has any legal reach to punish offshore operators, so the majority of those operators offer their services to California residents.

To save you time, we are only displaying casinos that are accepting players from California in the United States.
If we have jumped the gun, you can remove that filter by clicking here.

or continue to Chumba Casino