The State of New Hampshire states pretty simply that any form of gambling that is not specifically authorized by the state is illegal and engaging in same is a Misdemeanor. Even though the code may have been written before the advent of online gambling, the state does not authorize any form of online gambling  casinos explicitly, so all online gambling is therefore unlawful. The restrictions that we have found focus mainly on operators. However, we did find one that might include players,...
Read more 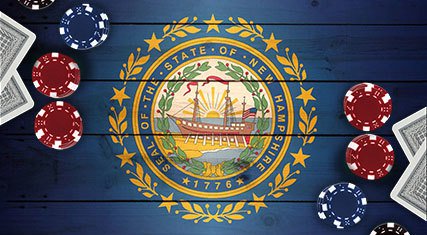 The restrictions that we have found focus mainly on operators.

However, we did find one that might include players, which reads:

I. A person is guilty of a misdemeanor if such person knowingly and unlawfully:

Permits gambling in any place under the person's control.

Gambles, or loans money or any thing of value for the purpose of aiding another to gamble.

...this might also have to do mostly with operators or people who allow operators to engage in gambling activities whilst on property owned by them, but the, “Possesses a gambling machine,” might theoretically be extended to include one’s computer if one is gambling online.

For mere players, if they were prosecuted at all, it would be under a Class B Misdemeanor which does call for up to $1,200 in fines, but no possibility of jail time.

Even then, while we did discover one instance in which there were arrests for operators of illegal gambling (illegal physical video poker machines) we could not discover any incidence in which a mere player was arrested and/or prosecuted for playing online, most likely because no such thing has ever happened.

With that, the majority of online casinos that operate within the United States also extend their services to New Hampshire, some of which are listed below:

To save you time, we are only displaying casinos that are accepting players from New Hampshire in the United States.
If we have jumped the gun, you can remove that filter by clicking here.

or continue to Chumba Casino