Casino Banking Casino Banking Forum Languages Supported
Argentine Peso in the Past The Argentine Peso, established as the peso convertible, is Argentina’s official currency. The name derives from the Spanish eight-real coin, often referred to as a peso. Argentina started issuing its own coins after the country’s independence. These included soles and escudos, relaes, and the silver eight-real. They remained in use until 1881. There have been several versions of the peso in the country’s rich history, both in the form of coins and banknotes....
Read more

Argentine Peso in the Past

The Argentine Peso, established as the peso convertible, is Argentina’s official currency. The name derives from the Spanish eight-real coin, often referred to as a peso. Argentina started issuing its own coins after the country’s independence. These included soles and escudos, relaes, and the silver eight-real. They remained in use until 1881. There have been several versions of the peso in the country’s rich history, both in the form of coins and banknotes. The current iteration of the peso began circulating in 1992. 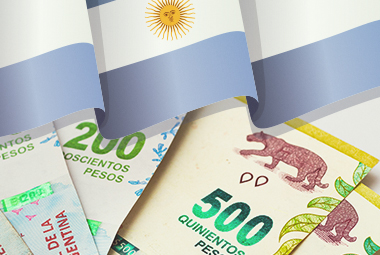 The Argentine peso might not be too popular outside of the country, but one aspect has garnered widespread attention. The rate of devaluation the currency has experienced since the late 20th century is astounding. Its official exchange rate to the US dollar was around 3:1 in 2002. It’s risen so drastically over the years that in October of 2020, the unofficial rate to the US dollar sat at around 195:1! At the moment, there are 15 denominations of the Argentine peso in circulation. They include six banknotes and nine coins.

What are the Best Argentine Peso Casino Payment Services?

Argentina has a complex relationship with online gambling. Thankfully, players from the region shouldn’t have too much trouble accessing local and foreign online casinos and enjoying their favorite casino games! What makes things easier for Argentinians is the slew of payment options they can use in these venues. They have access to tons of popular methods, but only a few offer support for the native currency. If you’re wondering which of these methods are best, here are the top five options:

MasterCard: MasterCard is a prepaid card that most Argentinians use daily. As one of the most common card options in the country, it’s easily accessible and offers a reliable and safe way to transact in various industries. Of course, the iGaming industry is one of them! Players are free to use the card in online casinos, and the process of doing so is pretty simple. One thing to keep in mind about MasterCard is that the processing times are somewhat long. If you need speedy transactions, you might have to find an alternative.

VISA: VISA is just as popular as MasterCard in the country, if not even more! Like most bank cards, VISA is reliable, safe, and convenient. Because of its worldwide reach, it’s also a common payment service in most online gambling venues! Unfortunately, VISA suffers the same problem as MasterCard. Withdrawals can be drawn out, which is an issue for some users.

Astropay Card: Astropay Card is a virtual credit card service with tons of top-notch utilities. Since not many Latin American players have access to international credit cards, it’s an excellent alternative that many online casinos accept. Players can fund the card using several different options and use it for reliable and quick transactions at any time! Additionally, it’s a great way to remain anonymous since none of your banking data is shared with the operator you choose.

EcoPayz: EcoPayz is a pretty popular option in Argentina. The service gives users two different options, including an online eWallet service and a prepaid card service! With the eWallet, you’re privy to quick transactions, a secure online banking platform, and lowfees! With the prepaid card, you get all of this and heightened anonymity! The cons of using the service are mostly related to the prepaid card. Withdrawals aren’t available with that option and shops that offer it can be rare.

MuchBetter: MuchBetter is one of the most popular eWallet services in the world. It’s known for its impeccable security and a long list of pros that extend to online casino payments! Among other perks, players can expect speed, low to no fees, and maximum safety when using MuchBetter. Unfortunately, there is some bad news. While the eWallet is pretty popular, it’s not too widely available in the online gambling world.

Argentina has a pretty complicated relationship with the gambling industry. The country’s federal government officially got regulations for interactive gambling in 2006, and some licenses were issued. Unfortunately, this was short-lived. Licensing responsibilities were relinquished to the 23 separate provinces in the region, all of which established their own rules and platforms.

There have been countless efforts by various provinces to better-regulate online gambling. The intent is to establish well-functioning licensed platforms that users can visit. Right now, Buenos Aires is leading this effort with some promising progress. Visiting foreign operators is still the best option for Argentinian players. The bad news is, they have no player protection since these venues aren’t licensed in the country. If you’ve decided to play on one of these platforms, make sure it’s well-established and trustworthy.