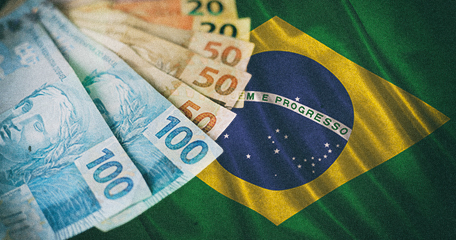 The Brazilian real is Brazil’s official currency. It’s issued by the Central Bank of Brazil and is subdivided into 100 centavos. Surprisingly enough, the Brazilian real hit the market pretty recently in 1994. This modern currency was created in hopes to stabilize the Brazilian economy, which has been a grueling task throughout its years on the market. The value of the Brazilian real has fluctuated a lot since its release. While it reached its peak value not long after its release, the currency is experiencing record lows at the moment.

The Brazilian real boasts seven banknotes and six coins at the moment. While the 5, 10, 25, 50 centavos, and 1 real coin are common, the 1 centavo coin is rarely used. The banknote denominations of the currency include 2, 5, 10, 20, 50, 100, and 200 Brazilian real. The real might not be the most popular currency out there, but it’s worth noting that it holds the spot as the twentieth most traded currency by value worldwide.

It’s safe to say that Brazil’s relationship with gambling is complicated. Because of this, the currency’s relationship with the online casino scene is pretty complex as well. The good news is, things are starting to look up! You can find plenty of online venues accepting Brazilian players, and many payment options have emerged to help them out on their ventures. The Brazilian real is now a viable option with several excellent payment methods. In the list below, we’ll introduce you to the best of them:

CashtoCode: The name of this payment method should give you a pretty good idea of what it is and how it operates. CashtoCode gives users a chance to deposit in online casinos without sharing any personal banking info. They can purchase a code at a point of contact and use it to later deposit at a venue of their choice! CashtoCode isn’t too popular right now, but it is growing! If you look hard enough, you’ll find it as an option in several top-notch sites.

Boleto: Boleto, also known as Boleto Bancario, is a popular payment option available exclusively to Brazilian casino fans. What makes this method unique is the option to purchase casino credits with cash! Players that want to deposit are presented with a bank slip that they can pay at participating local merchants or online. While it’s not always the most convenient option, it grants players anonymity. Unfortunately, it also comes with a somewhat hefty fee for each transaction.

VISA: VISA is undoubtedly the most well-established payment option on this list. The bank card is available in locations worldwide, giving Brazilian players a chance to try out top-tier casinos they might not have access to with other payment methods. The benefits of using VISA derive from its incredible reach and high-end security. Unfortunately, most modern payment options tend to overshadow it when processing times come into play.

Neteller: Most players are already familiar with Neteller. The eWallet service is one of the most popular banking options available right now and with good reason! Neteller has been on the market for decades now, so it’s pretty well-established. On top of being available in tons of online casinos worldwide, it offers some of the lowest fees out there and near-instant deposits and withdrawals.

Pay4Fun: Pay4Fun is a Brazillian eWallet service made with online casinos in mind. As it stands, the service offers players a chance to deposit without having to share their bank information with the venue they choose! Additionally, it includes tons of benefits like fasterwithdrawals than what you see with traditional bank transfers and overall lower fees. Since it’s still pretty new, Pay4Fun isn’t too widespread. You can find it in about two-dozen online casinos right now.

We’ve already mentioned that Brazil has a complicated history with gambling. The country might be one of the biggest entertainment capitals in the world, but its market has been sorely deprived of gambling for a long time! The good news is, there has been a growing initiative towards changing the state of the gambling industry in the country. Brazil got its first online lottery in 2011 and later saw changes to sports betting legislation! As of 2018, land-based and online sports betting practices are legal in Brazil.

With the Ministry of Finance in charge of defining the legal regulatory and licensing policies for sports betting practices, the future of online gambling in Brazil is looking better. Of course, there’s still a long way to go. There are plenty more changes that need to be made to allow for better player protection and better overall regulation. It’s worth noting that players can be legally charged if they play on online gambling sites that aren’t licensed and regulated by the country. Luckily, there’s not much to worry about as no such cases have been recorded yet.