Casino Banking Casino Banking Forum Languages Supported
The Mexican Peso Throughout History The Mexican peso is Mexico’s official currency. Like many other modern pesos and dollar currencies, this one originates from the historic Spanish dollar that was active from the 16th to the 19th century. The peso has gone through several iterations in the past, all with pretty wildly fluctuating values. Surprisingly, it proved to be one of the more stable currencies in Latin America. Unfortunately, this changed in the late 90s following the oil crisis, and...
Read more

The Mexican Peso Throughout History

The Mexican peso is Mexico’s official currency. Like many other modern pesos and dollar currencies, this one originates from the historic Spanish dollar that was active from the 16th to the 19th century. The peso has gone through several iterations in the past, all with pretty wildly fluctuating values. Surprisingly, it proved to be one of the more stable currencies in Latin America. Unfortunately, this changed in the late 90s following the oil crisis, and soon, the country had to introduce a new currency, the current modern iteration of the peso – the nuevo peso. 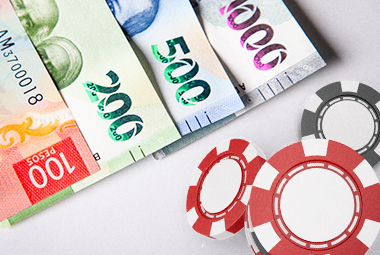 Despite some internal issues, the online gambling scene in Mexico is one of the better-regulated ones in the region. Of course, this is good news for players within the country. They can visit vetted operators, although that hasn’t always proven to be as legitimate as some would hope in the past. Since gambling isn’t banned, users can choose between popular banking options when visiting a venue. Sure, the list may be somewhat limited, but the options are top-tier. Here are a few you can go for:

VISA: VISA is arguably the most widespread banking service out right now, giving players access to practically all online casinos in the region. It’s well-established, safe, and more than convenient. Since most people use this option in their everyday life, they can move towards using it in an online casino with ease. Unfortunately, VISA does have a downside. Since it’s a traditional bank card option, processing times are long. They’re usually much longer than what you get with modern options.

MasterCard: MasterCard is another popular bank card issuer and VISA’s biggest competition. Like the previous method, it has a large network that makes countless venues easily accessible to users. The service’s safety and reliability are its biggest pros, ensuring transactions always go through the proper channels. The downside to this is the slow processing speed. Withdrawals are slow, and can sometimes take up to seven days!

AstropayCard: Players looking to keep their anonymity intact tend to adore this method. Astropay Card is a prepaid card that’s massively popular in the online gambling world. On top of granting heightened anonymity, this prepaid card is incredibly speedy and has lower fees than most! Naturally, since the service supports pesos, it’s a go-to choice for many Mexican players. Unfortunately, due to its nature as a prepaid card, the method lacks a withdrawal option.

EcoPayz: EcoPayz is a pretty popular casino payment option for many. The online payment method currently offers two services, including a prepaid card and an eWallet. Both of these are top-tier. They come with reasonable fees, fast processing speeds, heightened anonymity, and are very convenient to use. The cons of this option mainly come from the prepaid card. As expected, withdrawals with it aren’t an option. Additionally, prepaid card resellers can be somewhat hard to find.

MuchBetter: MuchBetter is a beloved payment service that tons of Mexican and South American gambling fans choose. Of course, there’s a good reason for this. The eWallet offers all of the perks of modern banking, only supercharged! These include an intuitive banking platform, low fees, and lightning-fast transactions. The cherry on top is the anonymity that comes from its nature as an eWallet. While there are practically no cons originating from the service itself, it is much less available in the online gambling scene than other methods.

The Legality of Online Gambling with Mexico Peso

Gambling has been through many ups and downs in Mexico. The 1947 Betting and Raffles Law banned casinos and all forms of gaming throughout the region. This law has been amended several times throughout the years, giving players the green light on sports betting, playing on slot machines, partaking in bingos, and several other forms of gambling. Online gambling has been allowed since the year 2000 through a special license. The market is generally well-regulated, with several local operators offering excellent online gaming platforms.

An interesting thing to note is that players are only allowed to gamble in native online casinos with an established physical venue in the country. Unfortunately, due to controversial money laundering and other criminal charges domestic operators have been involved in, many players still choose to play in offshore casinos. While the regulatory bodies are making efforts to keep these shady dealings in check and offer better player protection, they’re having a hard time doing so.