1X2 Network Teams up with Signorbet in Italy 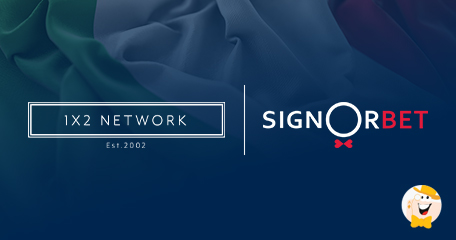 1X2 Network, a renowned provider of compelling online casino content in regulated jurisdictions around the world, has just established itself as a leading company in Italy after including its slots and table content with Signorbet.

As per the deal, a well-known online casino and sportsbook brand will supercharge its game collection with some of the best slots and table games from 1X2 Network’s top-tier Iron Dog Studio and 1X2gaming platforms. Included will be games such as Phoenix Inferno, Blood Queen, and Pirate Kingdom Megaways, highly demanded Megaways slots, Megaways Jack, 1 Million Megaways BC, and the newest addition to the suite Gods of Asgard Megaways.

Other Details of the Deal

The agreement between the two brands also includes 1X2 Network’s Wolf Strike and Book of Ba’al. Players have already shown great interest in ‘Book of’ format content, especially in the Italian market. At the same time, Hold and Win slots are another top choice for both studios and operators. All these games come with exciting and authentic features that deliver a thrilling experience and are guaranteed to become an instant hit with Signorbet’s discerning players.

What Was Stated in the Newest Deal

The partnership with Signorbet enhances the provider’s foothold in the market where it provides the content to some of the leading operators such as Goldbet, Sisal and Microgame.

“We continue to focus on partnering with operators in regulated markets, and this deal with Signorbet further establishes 1X2 Network as a leading casino content provider in Italy.

“Iron Dog Studio and 1X2gaming have both cracked the code when it comes to developing slots and table games that engage and entertain, and it’s great to see our titles now stocked in the Signorbet lobby and for its players to enjoy the thrills and big win potential they deliver.”

On the other side, Cristiano Azzolini Di Maggio, head of the casino at Signorbet, says that their players expect the toponline casino games in the market, and that is why it was vital for the brand to join forces with 1X2 Network and add games such as Wolf Strike and Book of Ba’al to its increasing game portfolio.

Integrations like this have turned Signorbet into the go-to online casino platform for players in Italy, and with 1X2 Network now included in their content portfolio, long can continue.