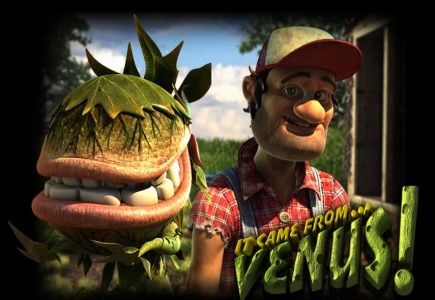 A brand new 3D slot was launched by Betsoft recently, with a very interesting theme involving an alien carnivorous plant, farmer Skeeter who befriends it and a military action which aims at catching the creature.

You’ll find this hilarious game under the title It Came From Venus, which features five reels and thirty lines and includes Betsoft's new Collapsing Reels bonus feature and free spins.

"It is always our goal to use strong, charming themes, bolstered by memorable characters. The characters in It Came from Venus are incomparable. Skeeter and his plant companion are detailed in vivid, true 3D," said Anthony Locke, BetSoft's head of product development.
Casino Games Casino Software Back to articles