New Developments to Be Presented at EiG 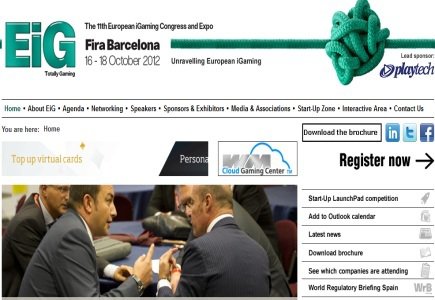 This year’s European iGaming Congress and Expo (EiG) which will open its doors on Oct. 16, will see a host of new developments presented by major online gambling companies, including Intralot Interactive, GTechG2, Williams Interactive and EveryMatrix.

The new offering by Intralot includes its i-Flex Betting Platform which is designed in a way to bring together both Retail and Interactive channels. There’s also the new HomeSmartPlay suite, through which player can bet on iTV, and engage in Peer-to-Peer Gaming and Group Play, having a massive sporting catalogue at their disposal via their remote control.

The company will also introduce two social gaming-related products – one of them is Lazyland Social Gaming Suite which aims at attracting new demographcs, boosting customer retention and player awareness of real-money products; the other one is a bridge between the social and real money gaming domains, dubbed Subscriptions and Group Play product suite.

When it comes to interactive gaming software and services provider GTECH G2, it made a big announcement of its Bingo 2.5 which it claims will "to boost convenience and enhance the playing experience". Some of the features of the new Bingo 2.5 include an in-game lobby in which players can easily switch rooms and pre-buy tickets from other rooms without leaving the curent game; an adaptable screen option which allows for adjust of game window to different screen resolutions and bingo client window sizes; detachable mini games which can be placed anywhere on the screen.

The company will also present a new instant poker client which features the ability to store and view a player's hand history and cash games played in the base currency in which the operators system is configured. In addition to all this, Gtech G2 has prepared a new mobile development in the Anytime multi-channel product through which operators will be able to add poker, casino and bingo games on the mobile channel.

Then, the EiG expo will see the newly established WMS Industries' subsidiary, Williams Interactive, introduce its online casino and multiplayer gaming portfolio to potential new clients. Their offering includes a variety of managed services and server integration capabilities for regulated markets, and thanks to the integration of sister company Jadestone’s flexible game server solution and gaming platform Arena™, the company’s customers will be able to offer their players a host of multiplayer card and dice games, including Backgammon, table games and video poker.

It has been specified by the company that its cloud-based, white-label play-for-fun offering can become real-money action as soon as that becomes an option, and that it includes social gaming elements like dynamic messaging capability.

New developments will also be presented by its sister company Jadestone, whose online gaming platform will launch popular WMS slots converted to online environment. These include titles such as "Alice Glitz" and "Goldfish", but apart from the slots, the company will also present an advanced MiniGames system with a range of tailored mini-games that can be offered inside the sportsbook or other product lobbies.

And last but not the least comes EveryMatrix, which announced the introduction of a new GamMatrix Mobile360 product, through which sports and casino game will be offered together, as part of a single web application, complemented by full bonus and payment functionalities.

What GamMatrix Mobile360 provides is a mobile interface for deposit and withdrawals, supporting many payment methods based on the GamMatrix Payment and Processing Platform. The new offering is available to iPhone, iPad, and most Android phones users, with the gaming range including titles from Betsoft Gaming, IGT, Microgaming, NETENT, and Play’n GO. More are to be added in the coming months, announced the company, adding that Mobile360 also integrates the OddsMatrix mobile sportsbook thanks to which players will be able to bet from the same lobby.
General Gambling News Back to articles