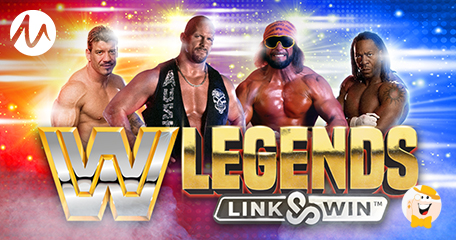 There is a lot going on at Microgaming this month. It all started on 4 October when the provider presented its latest exclusive releases and entered the newly-regulated Dutch market two days later.

Now, the world’s leading aggregator of online gaming content is back to pay tribute to the World Wrestling Entertainment in partnership with All41 Studios by launching WWE Legends: Link&Win.

After introducing us to the latest exclusive compilation of games at the beginning of October, the Isle of Man based aggregator and leading gambling software company is bringing us WWE’s immense global brand in a new format, called WWE Legends.

Joining the Link&Win arena will give players a unique opportunity to walk away with the Champion Jackpot, seeding at a staggering 5,000x total bet! However, to trigger it, wrestling enthusiasts will have to fill all 15 symbol positions with the appropriate symbol.

WWE Legends is home to three mighty scatter symbols that can land anywhere on the reels during base game. Their presence on the grid will award five free spins, where the three middle reels merge into one larger-than-life symbol for epic win potential, as described by the studio. If three more scatters emerge during the feature, players can extend the action with another three free spins and so on.

In regard to mechanics, HyperSpins will ensure that players get a re-spin of any reel individually at a cost for another chance at completing a winning combination. On top of that, their potential to trigger free spins or Link&Win features sooner is also higher.

WWE Legends: Link&Win is available since 19 October exclusively to operators on the Microgaming platform.

“In WWE Legend: Link&Win™, two epic entertainment worlds collide in dramatic fashion, bringing all the excitement you’d expect from the legends of WWE.”

Booth further explains how the provider’s latest mechanic Link&Win will once again prove its power with this title, as it is capable of reaching a maximum prize of 5,000x. On a similar note, HyperSpins will add a new interactive element to the excitement, rewarding players in a brilliant fighting atmosphere that only WWE can create.

Bradley Johnson, head of game design at All41 Studios emphasized the importance of launching WWE Legend for the company, since its entire team cooperated with one of the world’s biggest and boldest names in entertainment.

According to Johnson, the developers were determined to make everything single detail in WWE Legend: Link&Win larger-than-life, including superhero-style characters, huge win celebrations, atmospheric arena-style sounds and the Champion Jackpot.

Players will enjoy an immersive and massive event, concluded the head of game design.

I like the theme, definitely innovative created by Microgaming along with All41 Studios. It's quite attractive, particularly because it provides HyperSpins mechanics which hopefully will bring us tons of luck. We need to test it :)

Well, not my cup of tea. However, it has a nice pack of features, so I think I might try it out :)

Awesoooome, nobody does it better than Microgaming! If you’re a WWE fan, it won’t get any better than this.