All41 Studios Enchants With Magic of Sahara Slot, Made Exclusively For Microgaming 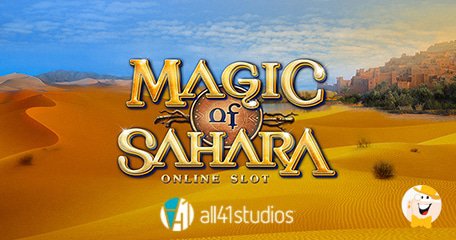 The vast, scorching desert located in North Africa is the main protagonist, so to speak, of the latest joint venture between Microgaming and All41 Studio! The latter has developed their second ever game, exclusively for the Isle of Man-based giant – and it's poetically dubbed, Magic of Sahara.

This extraordinary voyage takes to a 3x5 configuration of reels and conceals a whole lot of special features that are just waiting to be discovered!

After releasing Le Kaffee Bar some months ago...

...All41 Studios, the independent game studio providing content to Microgaming, has followed that with this release that transports players to the mystic dunes and an oasis of treasure in this nine-paylines online game, ornate with golden sands and aesthetics of Bedouin nomadic people.

Atop of lavish artwork and befitting soundtrack, the alluring atmosphere of the game invites everyone into a wonderland of stacked wilds, extra spins and Token Chain feature. During the base game, a group of super stacked wilds will appear, materializing on reels three and four.

This invokes stunning rewards, while bonus spins themselves tell the tale of their own.

The merchant symbol grants a collectible token added to a Token Chain above the reels. This will award one extra spin. If you manage to collect 25 or more of these, OR land at least three scatter symbols which will instantly launch the extra spins mode, with a maximum of 34 spins.

As soon as players enter the bonus spins mode...

...five extra spins are awarded. During this round, all wins are multiplied by 2x while Wilds can be super stacked on every reel.

“Magic of Sahara brings the wonder of the desert sands to life. All41 Studios have crafted a truly immersive world, with the game’s excellent soundtrack and detailed artwork, which dynamically transitions between day and night cycles, creating a spellbinding atmosphere. As well as providing a feast for the senses, Magic of Sahara delivers engrossing features in the form of the Token Chain collection mechanic and a highly rewarding free spins round, complete with the win boosting 2x multiplier.”

“We’re excited to take players on a mystical journey to experience the Magic of Sahara. Our latest slot adventure celebrates the enchanting fables of African nomad culture, combining detailed and dynamic graphics with engaging game mechanics. It has been a real thrill for us to capture the unique mystery and allure of the warm sands.”

Have a peek at game's exclusive preview:

A Flurry of Games

First we had Sherlock of London – a collab with another independent studio, Rabcat; it's a 3x5 game with 25 paylines and immaculate atmosphere of old London.

And then came Jungle Jim and the Lost Sphinx, the sequel to the popular slot and a return of iconic character to reels worldwide.

“a whole lot of special features”

Looks very good. Hopefully it's as lucrative as some other Microgaming titles.