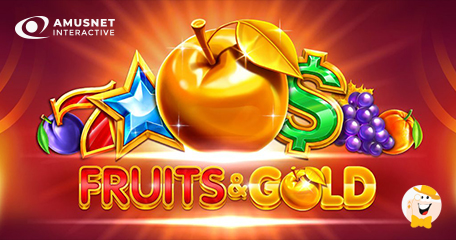 Get Ready for Some Fruitilicious Winning Opportunities

Online slot developers keep on competing who will come up with more authentic plots, more unusual twists, or more innovative features, but from time to time, they all like to go back to the roots. That’s right, it’s those good old fruit-themed slots we are hinting at.

Amusnet Interactive has prepared a special surprise for fans of vintage games- Fruits & Gold. Taking place on a 5x3 grid, this mobile-ready installment displays 5 fixed paylines, an RTP of 96,85%, and a selection of interesting features designed to unlock numerous winning opportunities.

Fruits & Gold by Amusnet Interactive is home to the beloved fruit symbols, among which watermelons, grapes, cherries, and lemon, but it has other retro icons as well, such as bells and sevens.

…which represents the Expanding Wild symbol of the game, and can occupy central reels. It serves as a replacement for all other symbols, except for the Blue Star and Dollar Sign.

Those two are Scatters, each with a different value. Three, four, or five Blue Stars grant 15, 100, or 500 EGT respectively. The Dollar Sign can appear on the first, third, or fifth reel, and it awards 100 EGT if three of a kind are found anywhere in the said reels.

Spicing up the atmosphere is Jackpot Cards, a 4-level game feature, where each of the stages is illustrated by one of the card suits. Once this special Bonus game is triggered, impressive Jackpots are revealed. Finally, there’s Gamble Feature, where players can double the winning amount if they guess the color.

Catching a glimpse of the studio’s portfolio…

…players will notice that fruit-inspired releases occupy the biggest portion of the lobby. Less than two weeks before announcing Fruits & Gold, the provider rolled out Power Hot, with up to 200,704 reelways. In June this year, the team unveiled Flaming Hot 6 Reels, another work-of-art with Jackpot Cards Bonus and Gamble Feature.

Milestone Year for the Company

Speaking of June, the company has made an important announcement, letting the iGaming community know about their strategic decision to rebrand. Formerly operating as EGT Interactive, the studio has decided to move forward under a new name, which, as the team says “better reflects its core offering and company values”.

Only two weeks after the rebranding announcement, the company presented itself at Peru Gaming Show, which took place from June 15-16 2022 in Lima, Peru. Less than a month later, the studio attended iGB Live 2022 exhibition in Amsterdam from July 5 to 8.

It’s interesting to mention that…

… the provider has been part of the industry for more than two decades, as it was established (as EGT Interactive) in 2002. Licensed to operate in more than 30 jurisdictions, the studio is in partnerships with over 500+ operators worldwide. At the time being, its portfolio accommodates around 240 slots, table, and live dealer games.

“a special surprise for fans of vintage games”

Jackpot Cards bonus and Gamble feature are cool, but I think they should develop more features or else players will get bored!