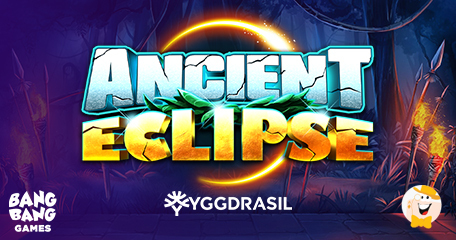 One of leading creators and publishers of online slot content, Yggdrasil, has launched the debut game of their partner studio Bang Bang Games - Ancient Eclipse.

A Tale of Mystique

The company’s PR describes the game as “Harkening back to time immemorium” and in it, players need to make most of mystic time to create massive wins from an ancient civilization that stars in the slot game.

This is a 5x4 slot game in which players aim to land both elements of the Eclipse to trigger massive wins.

On the reels, there will be massive symbols landing that turn into Golden Sun Frames which remain sticky on the reels until the Eclipse gets triggered.

If a Moon symbol lands in a Sun Frame, an Eclipse is triggered. This causes all Sun Frames to become Wilds. The Eclipse can be re-triggered, and every additional Eclipse has an increased multiplier of 1x for massive wins.

Whenever three Warriors land on the reels, Sticky Suns Extra Spins are triggered. All Sun Frames will remain sticky during this mode, even after an Eclipse. Every Moon that lands adds not only a new Sun Frame - an extra complimentary rotation will come too.

Bang Bang Games debuts under the YG Masters banner with Ancient Eclipse. The studio joined the program in July 2020. They used GATI technology, supplied by Yggdrasil, to power this particular game.

GATI allows all developers that have access to it to use preconfigured, regulation-friendly, standardized development toolkit that produces consistently cutting-edge content.

“Our YG Masters program continues to drive innovative content to market and this is evident in Bang Bang Games’ landmark inaugural title, Ancient Eclipse. GATI has proven to be an enabler for our partner studios and we can’t wait to see what more comes from them.”

“With a thrilling theme, lucrative Free Spins mode and an artfully crafted environment, we couldn’t be happier and look forward to it being rolled out across Yggdrasil’s partner network, reaching players all over the globe.”

“the debut game of their partner studio Bang Bang Games”

Yggdrasil always brings something to tickle our imaginations, I can't wait to try it.

I like these slots with an ancient theme. I hope that this one won't let my expectations down!

It looks like an interesting slot game. This partnership of Yggdrasil and Bang Bang games studio looks like a successful one.

Yggrasil, as a leading provider, always makes sure to provide an innovative content. This time with Bang Bang they aimed ingeniously the players experience ancient spirit. I hope the debut will bring them a remarkable success.

Sounds very good, would be nice playing it.