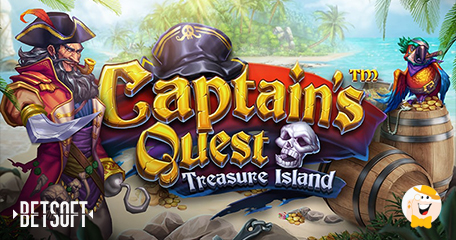 Betsoft Gaming invites players to reveal the pirate galleon in the new game featuring 5 reels and 10 fixed paylines. You should get ready to encounter the Wild Captain and take gold. The maximum exposure in the game is 25,280.5x the bet, so you might want to embark on this mission as soon as possible.

More Details on the Features

You join the game and start spinning while looking for the Nudging Wild Captain who can turn everything into a fortune. When he lands on the screen, he will nudge the reels up or down and stand three symbols high while turning the whole reel wild. The latter reel will also replace all other symbols in the game

As soon as three or more Wild reels happen, 10 Bonus spins will be awarded. Players are then taken to the treasure island where they will meet Jolly Roger and treasure chests.

Thanks to the hit rate of 55.69% in bonus spin mode and 96.28% RTP, you should get ready for this experience and reveal the treasures.

“The very big win potential of 25,280.5x max bet, married to the amazingly detailed pirate theme, makes this a uniquely immersive slot from Betsoft. Captain’s Quest,™’ Treasure Island is designed to absorb players’ attention, much the way a great film does, by putting the player literally at the centre of the game. We are expecting a very positive response from our players to this new release.’

“Betsoft Gaming Will Have You Hooked with Latest Release Captain’s Quest™, betsoft.com, September 29, 2022.