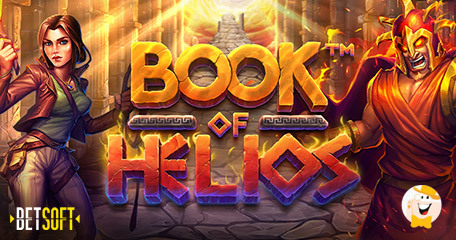 Award-Winning Provider Pushes the Limits of Creativity Once Again

Following a string of successful agreements with multiple operators, Betsoft has decided to treat players with another work of art. Named Book of Helios™, the newest online slot introduces players to adventurous explorer Olivia Brave whose mission is to set Helios free from his night-time prison.

Eager to play with different themes, the studio made quite an authentic mix of Greek mythology, magic, and treasure hunting. Fantastic visuals aside, the game incorporates a wide spectrum of rewarding features and a massive winning potential.

Seeking inspiration in Greek mythology, and Book-themed slots, Betsoft Gaming delivered Book of Helios™, challenging players to join Olivia Brave in her mission. Justifying her surname, Olivia joins forces with Helios himself, determined to help him find the book and release him.

Anna Mackney, Head of Account Management, Betsoft, commented on the newest addition to the catalog:

“Player feedback is hugely positive towards high volatility slots with Greek gods and magic book themes: in Book of Helios™, we are delivering on every front whilst simultaneously offering superb win potential. We are confident that that Book of Helios™ will enjoy great success.”

Olivia, Helios, and the Book represent the high-paying set of symbols in the game, while the Golden Bow & Arrow, Olivia’s ‘Indiana Jones’ whip, and the Greek-style alphabet act as low-paying ones.

If you are a fan of Greek mythology…

…then you probably know that there’s confusion regarding the identity of the God of the Sun. Although some historians question his role, there’s more than enough evidence that confirms his importance. He’s mentioned in numerous philosophic texts and poetic or fictional texts, and even Homer refers to him as the Sun God.

Exploring the Wealthy Selection of Features

Spreading across 5 reels, the most recent addition to Betsoft’s game catalog contains 10 fixed paylines and jaw-dropping winning exposure of 20,168x max bet. Spicing the atmosphere up is the hit rate of 51.73% (during free spins mode) and an RTP of 95.58%.

One of the most important symbols is the magical Book…

…which acts as both Scatter and Wild. When the scatter symbol is randomly added by Helios to reels 2, 3, and 4, the game’s free spins feature is activated. While this mode is on, one paying symbol randomly becomes a Special Expanding Symbol. In case that very symbol lands on two or more reels, forming a win, each symbol will expand vertically to cover the entire reel.

At the same time, any Books found on the reels they will expand vertically to cover their entire reel, revealing a Multiplier up to 5x. When acting as a Wild, the Book Multipliers have their own Multipliers, opening room for rewards of up to 125x the stake. In case the special expanding symbol and the Book land on the same reel, the higher value Book takes priority.

Finally, the game contains a Buy-In feature, available in limited jurisdictions, for players who want to directly access additional spins.

If we find books on the reels, we will possibly grab a 5x multiplier and then the Book Multipliers have their own Multipliers :) Let's find the books and grab rewards of up to 125x the stake :)

The Demo version is fantastic, I hope the real version will be as bombastic as the demo with winnings :)

Sorry, but I’m not a fan. Even as it was released exclusively at Bitstarz, so I got first rip at it.. I like to play the games when they’re new because I feel they are hotter, and usually it’s easy to like any game that you win on, yet I have won several times with this slot, and I never want to continue playing for some...

Sorry, but I’m not a fan. Even as it was released exclusively at Bitstarz, so I got first rip at it.. I like to play the games when they’re new because I feel they are hotter, and usually it’s easy to like any game that you win on, yet I have won several times with this slot, and I never want to continue playing for some reason.. I did go here quite a few times hit the feature and bounce, not once did I get stuck and lose my entire bankroll.. Which yes is a delightful thing but I just can’t sit there and find myself wanting to spin the reels again and again.. 🤷🏽‍♂️

As usual, Betsoft rocks the stage with fantastic visuals!