Betsoft Lines up Monster Pop and Back to Venus in April! 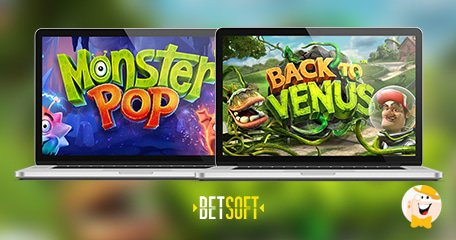 Masters of cinematic animations in slot development, Betsoft Gaming, reinforced their catalog at the end of March with Monster Pop, a fast-paced action slot with an expanding grid, mega win potential and cluster payouts of up to 1921x total bet.

The studio is also getting ready to present a sequel of its earlier hit “It Came from Venus” on April 23rd, featuring two new revolutionary bonus rounds, skyrocketing RTP and a maximum possible win of €86,760.

Contributing to the exciting action in Monster Pop is an impressive 13x13 grid whose mechanics are home to stacks of monsters and Monster Cloner symbols that expand on the playboard. As wilds kick in to increase all chances of winning, grabbing Flaming Spheres for complimentary rounds gets even more thrilling! This stage sets the swamp on fire, allowing players to watch how prizes tumble into their laps and potentially bring respins…

There is also a Monster Fury that can be triggered at the end of a cascade, bolstering huge reactions and a new line of wins! Marketing director, Annamaria Anastasi said about the latest product to arrive on the market:

“We are renowned for great storyboards and for true cinematic quality. Monster Pop strengthens this reputation. It also delivers an innovative take on cluster pays slot games, offering players excitement and huge win potential. Player response has been fantastic so far and we expect Monster Pop to be a long term hit.”

Monster Pop is also characterized with a huge RTP of 97.07% and it is available on all major platforms. The game was officially released on March 26th.

Alien Plant is Back

At the end of this month, Betsoft is releasing a long expected sequel to one of its ultra famous slots, It Came from Venus. Scheduled for launch on April 23rd, the next installment in the series, Back to Venus, is re-telling the story of an alien plant on 5 reels and 20 paylines. This time, however, the story is equipped with two revolutionary Second Chance features – Pricky Sticky and Respin!

Moreover, the plant can also award a complimentary respin during the Flowering Wild Burst round, including an increased chance for Asteroid WILDS. According to the supplier, the game features frequent storms of these symbols, ultimately leading to extra spins on the way to Venus with multiplier wilds waiting in the rocketship.

Live in Colombia with Rivalo

Award-winning content from Betsoft has improved its position on the global market in March, since the company entered into an arrangement with a leading Latin-American operator, Rivalo. To be able to supply the Colombian market, Betsoft had to pass a rigorous ISMS Audit first.

“The Latin-American market is a hugely exciting opportunity for us; we take new business markets very seriously, hence our commitment to regulation and compliance. We are very pleased to build a successful relationship with a professional and well-respected operator such as Rivalo.”

As stated by Alvaro Jose Mosquera, country manager of the Colombian sportsbook, it is critical for the company to work with providers who meet the requirements set by Colombia’s regulator, as there are only 18 licensed operators in Colombia.

“ready to present a sequel”

I found Monster Pop to be pretty good, played for the first time in LTC this morning. Felt very similar to some other Betsoft games, felt they could have been a little bit more creative.

I was holding higher expectations personally when its comes to the game Monster pop. i personally think the games win lose ratio falls more on the losing side with a 40 free spin promotion didn't win a cent.? in most games you win at least something within 40 spins even is its only 5 cents this game just eats your money...

I was holding higher expectations personally when its comes to the game Monster pop. i personally think the games win lose ratio falls more on the losing side with a 40 free spin promotion didn't win a cent.? in most games you win at least something within 40 spins even is its only 5 cents this game just eats your money but the graphics are excellent.

Monster Pop is a big game. It is ever expanding and I can't wait to get my fingers on it's massive grid layout system that just begs to be played. I am a huge 3D slot fan and it doesn't get any better than Betsoft for that 3D pop style they are known for. Let the fun begin!!

I am not patient enough to wait for the sequel to go live I have to try the demo. It came from Venus is one of my favourite games from Betsoft.