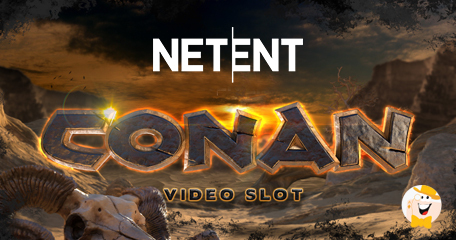 Step aside and make room for Conan the Barbarian, as he’s coming your way! Officially launching yet another branded game to enhance its already rich portfolio, NetEnt went live with the latest video slot paying homage to the fictional hero.

As the team says, the newest addition will be “terrorizing casinos all across the internet” starting September 24, offering quite an innovative perspective of one of the most popular and widely used topics.

Taking the widely-popular Barbarian who has inspired numerous films, books, comics and video, and board games over several decades, the developer launched a sword-flashing and swashbuckling feature-rich slot.

Choosing a character and a brand with a fantastic history…

…with legions of fans all over the world as a theme, the team had quite a challenging task to give the all-time favorite topic a complete makeover. If you belong to the mentioned fans, you are surely familiar with another Conan-themed release from our suite, but this one brings a completely new dimension.

Bryan Upton, the developer’s Director of Games commented on the video release as follows:

“With a globally-loved brand and legendary central character, Conan is a perfect addition to the NetEnt portfolio of licensed titles. We’ve stayed true to everything that has made Conan so popular over the last 50 years and added some true NetEnt touches and terrific twists that make Conan Video Slot an incredibly playable game with a range of fantastic features.”

Sword and Sorcery at Its Finest

Featuring its trademark, superior slots design, soundtrack and gameplay, the game looks visually superb and creates the feeling as if one is involved in the battle. To satisfy the curiosity, have a sneak peek at the game:

The base game has a massive variety, with four different features potentially being triggered during every round. Those include Tower Wilds, Mystery Symbols, Battle Wilds and the Thoth-Amon Feature.

A Rich Selection of Branded Hits

Encompassing a range of genres, including world-famous film and television brands…

… the team powered up with numerous brands to fuse the expertise in slots with established and widely popular fictional worlds. Incorporating a variety of multinational mega-brands into our collection, NetEnt’s catalog hosts world-class titles which stand great chances to beat the competition in the overly-saturated market.

“The Barbarian is back as NetEnt unleashes Conan”, netent.com, September 24, 2019.

“make room for Conan the Barbarian, as he’s coming your way”

It lookes like a slot I could love... till now it doesnt love me, yet. :D but I don't give up so fast :p

Whoah, this looks like a real movie, it’s so darn realistic! Count me in, I can’t wait to spin it.

After i watched video, the only negative thing is , that i don't like low payout video slots. With that i mean, that if slot gives you almost whole screen with wild symbols than 47 EUR win from 1 EUR bet is kinda low. That's just my opinion, but otherwise slot looks amazing.