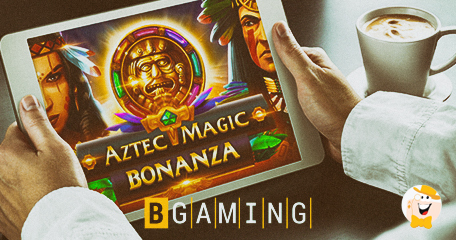 BGaming, a crypto-friendly developer of action-packed online slots announces one more addition to its burgeoning catalog. This time, the forward-thinking studio reinforces its portfolio with Aztec Magic Bonanza, a well-illustrated slot with lots of rewarding features.

Interestingly, the end of January was also marked with a colorful release paying tribute to the perished civilization. Dubbed Aztec Magic Megaways, the game is actually an enhanced variant of the provider’s top-performing slot.

When the multiplier symbol hits the reels…

…it takes a random multiplier value, starting from 2x all the way to up to 100x. When the refill sequence ends, the value of all multiplier icons on the screen are added together, after which the total win of the sequence is multiplied by the final value. Extra spins are granted when 4 or more Scatters land on the reels.

“We’re delighted to present another game of the Aztec Magic series, called Aztec Magic Bonanza. It includes all advantages of refilling reels slots. In addition, we added Buy Bonus, and Chance x2 features to make the title more engaging. Except for excellent features, the graphics dedicated to the perished civilization allow gifting great impressions to players!”

As Aliakseyeva hinted, the game is packed with other features, such as Buy Bonus, which allows players to directly enter a bonus game where 4 scatters are already on the reels. Chance x2 slightly increases the bet which opens additional opportunities to catch 4 or more scatters and initiate mode with complimentary spins.

How About Some Megaways?

Not so long ago, the creative team dished out Aztec Magic Megaways, the very first installment equipped with the top-performing mechanics. Just like the newest addition, it displays Buy Bonus and Chance x2, extra spins, and tons of other features.

…rely on Aztec Magic, a slot delivered in March 2018. Drawing inspiration from numerous myths, beliefs, and dark legends, the studio managed to create an immersive story and give a new perspective to one of the most commonly used themes.

Taking a look at this Aztec-themed trio of games, players shall notice that all the symbols and backgrounds are perfectly designed to create the authentic atmosphere of that time. The same goes for music and sound effects, which are non-distracting, but yet distinctive enough to make the gameplay more enticing.

Exploring the provider’s library, players shall encounter an interesting announcement, just in time for St Patrick’s Day. Scheduled to go live on March 3, 2022, Clover Bonanza is crowded with scatters, extra spins, refills, and many other surprises.

Another one, set to hit the shelves on March 28, 2022, Joker Queen is a vintage game with fruit symbols and 40 paylines. In terms of features, it hosts Joker Queen Respins, stacked wilds and expanding wilds, and a couple of more surprises.

Bonanza is a very engaging game and the graphics are looking amazing. Great work done by the team.

This game is really my type. I like the theme, animations and graphics. I will have to try it and hope for some great win!

The whole Aztec Magic series is great! Aztec Magic Bonanza must be even greater! Strap your seat belts and enjoy the wild ride this new game has to offer!

An all-time favorite theme with lots of great features- could one ask for more?