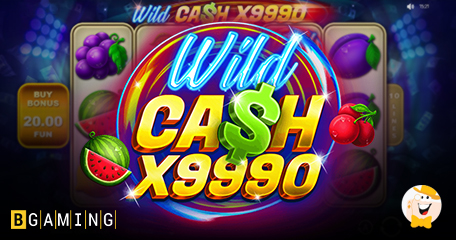 If you’re still dwelling on Wild Cash, an old-school video slot from BGaming with a fruity theme and basic gameplay, guess what?

Its creator, and one of the most dynamic game providers on the market, has revamped this successful release from Spring 2022, arming it with extra multipliers. Wild Cash x9990 is a powerful take on the previous release, so if you’re eager to learn more about it – keep scrolling!

Six months after bringing out a classic slot machine with a 3x3 reel set, Wild Cash, BGaming is upping the ante with an upgraded version, called Wild Cash x9990. It is an enhanced title with extra multipliers that increase the value of the base multiplier. Nonetheless, it must appear during the bonus game to have any effect.

Unlike its simple-looking prequel, the Wild Cash x9990 online slot comes with an exciting setup, ready to splash fruit symbols all over the reels. It is based on high volatility, while the theoretical return to players percentage is now 96%.

The central focus of the game has moved to a bonus level with a multiplier feature. It is activated by landing three, four, and five Wild Cash symbols within the base rounds.

That being said, if you happen to land 3 Wild Cash symbols on the reels, brace yourself for a real treat. This formation starts a bonus game with a x999 maximum multiplier, while four and five Wild Cash symbols can reward you with an additional x3 and x10 multiplier.

The ultimate result can sum up maximum wins of 9990x the stake!

Likewise, if you’re impatient at times and want to buy the bonus, you can use the special feature and enter the minigame any time. Note, that the Buy Bonus option is available in certain jurisdictions only.

“The first version of Wild Cash, released by our team in spring, proved that even though simple gameplay is not for everyone, classic fruit slots remain popular”, commented Yulia Aliakseyeva, the game producer at BGaming.

Although revamped and enhanced on 5 reels, 3 rows and 10 paylines, Wild Cash x9990 still revolves around straightforward mechanics. However, the game now has a bigger win potential, which should attract even more players to its greater reel set.

This revamped version of the studio’s recent hit follows the launch of a ‘hold and win’ slot, Miss Cherry Fruits Jackpot Party. Prior to that, the developer revealed its new Asian-themed Maneki 88 Gold, now part of a fast-growing collection with more than 90 slots in BGaming’s award-winning portfolio.

On September 2nd, slot supplier BGaming officially launched a vote to discover the brightest video moment of the Streamers Race. This competition among slot streamers comes with a $15,000 prize pool.

If you tuned in to Twitch or YouTube in the past three weeks, you were able to witness BGaming’s challenging participants of the Streamers Race. The winners of the main event were selected based on the results while the leaderboard looks like this:

The Streamers Race is BGaming’s debut event and the studio feels strong to support the streamers community but also proceed development of the initiative.

“BGaming is upping the ante with the upgraded version”

I like their original slot. Let's see what multipliers can do.

Already played it, the enhanced version is great! When multipliers kick in, it’s quite volatile, made even a smaller win!