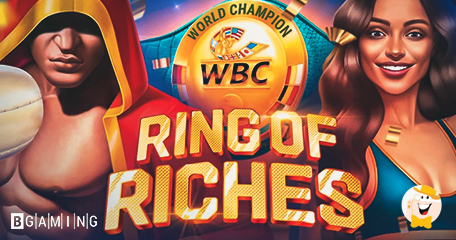 Producer of inventive slot games, BGaming, is ready to deliver the next-gen sports-themed slot that will elevate the amount of entertainment derived from a single game. The company has signed an agreement with World Boxing Council, world’s most influential boxing association.

As a result of this collaboration, the developer will release a new game called WBC Ring of Riches!

Boxing is a sport that is popular all over the world. Its emotional aspect captures the emotions and imagination of punters everywhere as WBC strived to bring together professional athletes and fans.

This inspired BGaming to tap into this vastly underused niche.

“BGaming is honored to be partnering with WBC, the major name in professional boxing. If we take a look back in history, the greatest fights are always accompanied by the casinos’ atmosphere. This is classic. And now, with everyone going digital, this is the perfect time to come up with a new classic. We have been in the industry quite a while now and this is fascinating, yet challenging to introduce sports into a slot game.”

WBC Ring of Riches will provide a mixture of thrilling moments and pure boxing excitement of big winnings.

The main character of this slot game is the mysterious fighter that will take the players into a virtual boxing ring and give them the opportunity to be rewarded with the WBC belt.

WBC’s president Mauricio Sulaiman has commented on this collaboration saying that iGaming and boxing have much more common than originally thought.

He added that he feels very happy with the alliance and that being a part of a massive entertainment industry is very motivating, as they are united with passion and excitement.

Sulaiman added that it is time to give everybody a chance to feel like a WBC champion and that this game will be appreciated by many boxing lovers.

WBC Ring of Riches will be released in the second half of May and will have 20 paylines, medium volatility and several defining features including Wild symbol in shape of gloves that, when it lands, will frame the reel is appeared on which will stick for a 10 spin cycle to create big wins.

“Knockout winnings are to come: BGaming to release a slot in association with World Boxing Council”, bgaming.com, May 7th 2021

“BGaming, is ready to deliver the next-gen sports-themed slot”