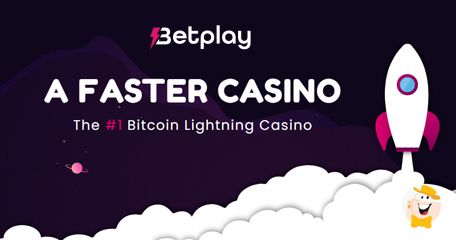 The casino is named after the Bitcoin Lightning network that lets Bitcoin deposits and withdrawals take advantage of it, enabling instant transactions and zero fees.

"At Betplay.io we aim to have the best player experience on the market and fast payments is an important part of this.

Bitcoin and crypto in general is changing the whole world, including the online casino industry, but right now we are seeing Bitcoin transactions taking longer time to confirm and fees above $10. Therefore, Bitcoin Lightning payments will be an absolute game-changer by making deposits and withdrawals significantly faster and cheaper for players.”

The operator has so far partnered with some of the gaming’s most prominent content suppliers. This launch will also include a big number of top tier studios such as Quickspin, Nolimit City, Blueprint, Red Tiger, Thunderkick and more.

Live dealer games will be provided through betgames.tv and Ezugi, while more studios will be added shortly, including Pragmatic Play Live Casino and Evolution.

The spokesperson for the brand also added that “they don't think having the best payment option for Bitcoin is enough, we also want to have the best games. That is why we have partnered up with top providers on the market with the goal of having the largest offering of games to the crypto community.”

Bitcoin these days is reaching new heights and record values. Currently, for one Bitcoin, a holder can get $31.367, which is the biggest price ever.

Although still turbulent, Bitcoin value has gone through a 338% boost over the last year. However, experts warn that this value is still highly volatile and some major drops may be expected in the coming months.

As it stands, it’s a good time to be a Bitcoin holder with more casinos embracing this cryptocurrency.

“casino that will support Bitcoin and Tether USD”

Bitcoin Casino Banking Back to articles

I started playing here pretty recently and have yet to cashout but my experience so far has been great. One of the best features is the ability to buy btc right in the cashier

I'm happy to see more companies using bitcoin and other cryptocurrencies for their preferred payment methods. Hands down the best way to deposit and withdraw because its quick and easy. I just wish more casinos with more popular slots would adapt this new process. I've checked out betplay.io and I wasn't really impressed...

I'm happy to see more companies using bitcoin and other cryptocurrencies for their preferred payment methods. Hands down the best way to deposit and withdraw because its quick and easy. I just wish more casinos with more popular slots would adapt this new process. I've checked out betplay.io and I wasn't really impressed with their content or promos. It was just like a copy and paste of one of the other bitcoin casinos and didn't have any flare. These casinos need something to make them stand out. Offering cryptocurrency options isn't that feature anymore. That's becoming the standard.

Totally agree that having the best payment option for Bitcoin is not enough, the players also want to have the best games available. Good to see they've partnered with some of the most popular software providers on the market.

Sounds exciting for sure!