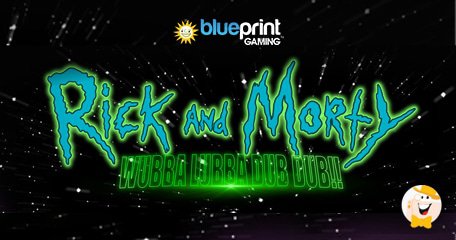 The iconic sci-fi parody cartoon, Rick and Morty, has got another video slot treatment by Blueprint Gaming! The sequel to the hugely popular Rick and Morty: Megaways (released this year) is packed with bonus rounds and reel modifiers.

The new smash hit title is called Rick and Morty: Wubba Lubba Dub Dub and developer has once again teamed up with Warner Bros. Consumer Products who is the license holder for this franchise.

Popular Cartoon in a Slot Form

This installment of a slot games inspired by this popular show…

…is “set to be bigger and better than its predecessor” as Blueprint develops a wide range of new bonus features and modifiers.

The slot game is based on the classic episodes of this show and features all the characters from the animated series.

On any spin, the Portal Gun may activate the Pickle Rick that awards one of seven modifiers. As this is a Blueprint Bonus Slot, there are six bonus rounds players can enter, including a new Big Money feature that has been incorporated into gameplay.

Rick and Morty: Wubba Lubba Dub Dub is the latest in the long line of games rich with features that Blueprint Gaming has developed, all designed to provide unique playing moments.

“We’re getting schwifty as we release our brand-new game featuring the sociopathic genius scientist and his inherently timid grandson!

Rick and Morty™ Wubba Lubba Dub Dub promises to be even more entertaining with an abundance of new features for players to experience. The design team have done a tremendous job in bringing the animated duo’s antics to life in this new version and we’re confident the game will prove very popular with players worldwide.”

The original Rick and Morty: Megaways game has 117,649 paylines and a staggering potential max cash jackpot of $250,000. You can read its full review HERE.

The 40-paylines title has stacked symbols and Lightning Spins on a 5x4 grid. The betting range goes from 40 cents to $40.

The theme of the game is mining for diamonds and the most differentiating feature is the Diamond Trail to the left of the reels.

Purvis has said that the game rewards players for every occasion a precious bonus symbol lands on the reels and makes for an explosive gaming experience.

“Rick and Morty, has got another video slot”

big fan of the show

Looks interesting... Blueprint never disappoints, but let's try this out! :)

Not a big fan of the show but I've tried the Rick and Morty: Megaways slot, and liked it! I'll give a chance to this one too.

Cool, I love Rick and Morty!