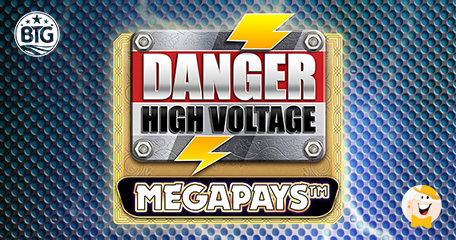 Want to see a favorite cult classic with dizzying jackpots and life-changing wins? Then join us as we unveil another hit with Megapays from Big Time Gaming!

The studio is back two weeks after releasing Vegas Megaways with a revamped version of its 2017 published Danger High Voltage, only now it’s about to explode with some Megapays! As announced, the latest groundbreaking slot is live network wide since 27 July, so let’s see some more details!

It’s been exactly five years since the release of a slot based on the one hit wonder “Danger! High Voltage” that rocked the clubs and discos at the dawn of a new millennium. Thanks to developing new mechanics in the meantime, Big Time Gaming has come up with the idea to amplify the experience of this electrifying hit game.

The result is more than anyone could expect: it now has the acclaimed Megapays but don’t worry – all the classic elements are still intacked. For example, the manic 2000s smash hit soundtrack from the Electric Six is still playing, while 4096 ways to win, including crazy multipliers, and two incredible bonus features will rock your world! On top of that, the game also goes spiralling into overdrive, giving you the chance to win a once-in-lifetime jackpot.

For those of you who are not so much familiar with Megapays, it represents a global jackpot system and it is exclusive to Relax Gaming. Since Big Time Gaming has an exclusive deal with the aggregator interms of launching new products on the platform, Danger! High Voltage Megapays is also part of the network where wins drop more frequently, affording more opportunities for players to strike big payouts.

As jackpots are progressive every time a bet is made, a percentage of it goes to the pot. The best thing about it is that any of the Megapays Jackpots can be won during a Megapays Feature, and you can trigger it with any bet amount!

Therefore, keep it up for the High Voltage bonus game, as you can get 15 complimentary spins here plus multiplied adjacent wins up to an extraordinary x66. Entering the Gates of Hell bonus game awards seven extra spins, while one of the game symbols is chosen as the Sticky Wild. It will substitute for all symbols in the center 4 reels while four sticky wilds in a reel add three extra spins up to a total of 19.

Hotter than a Flaming Taco Bell

As explained by the BTG chief executive, Nik Robinson, adding Megapays to a classic like Danger! High Voltage is the best way to improve it. For example, the groundbreaking mechanics offer each player a chance to win a life-changing amount of money, while the game itself brings back all that beautiful nostalgia from the 2000s thanks to Electric Six.

The Danger High Voltage Megapays slot is easy to play, and it can suit all player types as well as small bettors with preference to the minimum 20p stake, concluded Robinson.

“We’re delighted to be debuting Danger High Voltage Megapays. The original game is legendary, and this is a great addition to the Megapays series. We think this game is going to be massive,” commented Simon Hammon, CEO of Relax Gaming.

Take a look at the trailer here:

Great news, one of the most popular slot games with the new features! I have to try this!

Looks amazing. BTG is number 1, no doubt about it...