Casumo Casino Tested: Some Troubles with KYC during Withdrawal of CAD 50 via VISA Credit Card 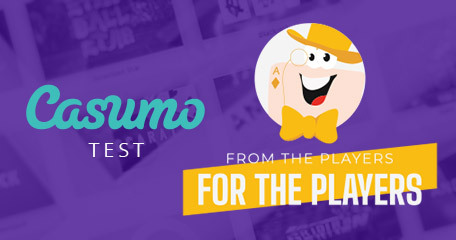 Successful Withdrawal Despite Obstacles with KYC

As our ambitious project “From the Players For the Players” continues to heat up, we bring you one more insightful report. This time, the well-equipped Casumo Casino was put under the microscope, to see how efficient this online gambling operator is in handling deposits and withdrawals via credit card.

Certified by multiple gambling institutions, this gambling site accepts players from all over the world. As Canada is in the focus of the community recently, due to the online gambling market launch in one of the provinces, we tasked a tester from this region to inspect the quality of services offered by this platform.

On the surface, one could assume that everything went well, with no major delays. However, there were some confusing moments during ID verification which slightly spoiled overall impressions. Fortunately, the tester eventually managed to withdraw the requested money, but still…

Was the procedure too complex and complicated? Were there any unusual requirements for KYC? Stay with us to find out all the details about our tester’s experience with Casumo Casino!

Founded in Sweden in 2012, Casumo Casino has been part of the iGaming industry for quite a while. Active in Canada, Sweden, Denmark, the United Kingdom, and Germany, this non-US-friendly operator features a massive content portfolio with games from renowned content developers.

In addition to tons of slots, table games, themed releases, Megaways adventures, Drops & Wins, sports, Slingo, and more, this multi-licensed gambling website displays a valuable welcome offer that provides punters with tons of bonus credits. There’s also the opportunity to collect points and keep track of the amount in the progress bar.

One of the indicators that customers are prioritized in this casino is the fact that they have a dedicated space called “Casumo Cares” with “Play Okay” tools. Login time block, logged-in time limit, and deposit limits are just some of the numerous options put at customers’ disposal to help them manage their gambling habits in the most responsible way.

Without further ado, let’s take a closer look at details of the investigation involving Casumo Casino!

Our tester of the day for this project was already a registered member of this platform, so all he had to do was log into his account and head straight to the cashier.

To join this platform, players should fill in a simple form that consists of three steps, plus the option to claim a valuable welcome offer.

On April 8, 2022, the tester accessed his account wanting to ensure no wagering was left on his balance before making any deposit. As he noted, this is something he always does, just to make sure there’s no bonus attached.

He got in touch with the support department and discovered that there was still CAD 0.0025 in bonus cash, and some wagering left from the bonus. Interestingly, his balance displayed CAD 0, so reaching out to the live chat department turned out to be a wise decision.

As the agent removed the bonus funds, the tester could proceed with funding the account. A detail worth mentioning is that the tester suggested players should always download transcripts of their communication with the live chat support department in case some misunderstanding occurs.

Having made a deposit the next day, he once again contacted the support department to double-check that no bonuses were added subsequently- none were.

While waiting for the answer to arrive, he tried launching a couple of games, but he failed to, so he inquired about that as well. As it turned out, it had to do with country restrictions imposed by the provider.

Assured that the remaining wagering was removed, the tester headed to the cashier to fund the account on April 9, 2022. He opted for a VISA credit card and funded the account with CAD 229.

To replenish the account, punters have a wide variety of methods at their disposal, ranging from cards to e-wallets. In some situations, a fee on deposits and withdrawals may be charged. The minimum amount to deposit is $10.

The operator offers a quick deposit feature as well, which allows players to replenish the account without interrupting their gaming session. This option is available to customers who have deposited via credit/debit card or Skrill.

Having learned about the country restrictions, he explored the lobby for a while and found a couple of titles worth exploring. On April 9, 2022, he checked out multiple games, among which Temple Tumble Megaways, God of Storms, Moon Princess, Aloha Cluster Pays, and Legacy of Dead.

Being an existing member, the tester has already successfully withdrawn funds beforehand, with no KYC required.

However, this time he had to go through the ID verification process before making a deposit. He uploaded a PDF bank statement which he downloaded from his online bank account along with a phone pic.

However, upon trying to initiate cashout, he saw that the bank statement was rejected, so he turned to e-mail support for clarification on the matter.

The response indicated that the document was probably rejected as “it was possibly edited” and showed full credit card details which are “considered to be sensitive data”.

Interestingly, the policy on withdrawals has the following requirement:

Seeking a further explanation, the tester was told that the document with the sensitive data was deleted, but she also mentioned that there were some edits on it.

In response to the explanation, the tester noted as follows:

As a final answer, he was told that his other proof of address was verified, so his withdrawal, which was in the “pending” status, should be approved as soon as possible.

Regarding the ID verification, the official Terms indicate as follows:

“The payment managers employed by Us will carry out additional verification procedures for payouts which exceed pre-defined thresholds, and for cumulative deposits exceeding two thousand British Pounds (£2000), or the approximate equivalent thereof in the currency of the territory in which You are resident. We further reserve the right to carry out such verification procedures in case of lower payouts and deposits. Such verifications may include but shall not be limited to, copies of a Player’s passport, National Identity Card, copies of a Player’s utility bills, and/or copies of the credit/debit cards used to make deposits. Where applicable, all identification documents provided should include a clear photographic image of the registered Player.”

On April 9, 2022, upon pressing the button to withdraw, the tester was notified that he needs to verify the account before submitting a request.

As he already sent some documents before making a deposit, it was unclear what was the issue, so he discussed it with the support team (as described in the Customer Support section).

Once the issue was resolved he attempted to cash out. On April 10, 2022, the tester requested to withdraw CAD 50 using the same method as the one for withdrawal. He received the money the same day.

In case the withdrawal request exceeds the amount of €/$50,000, a player may withdraw either the higher of the full amount deposited in that month or €/$50,000 per month. Players with a higher loyalty ranking may also be entitled to higher withdrawal levels. The minimum amount to cash out is $ 20.

Pending time is up to 72 hours. E-wallets are processed instantly, while bank transfers can take up to 5 working days. Withdrawals requested within the same 24-hour period as the deposit, via the same payment method, may be combined as one payment.

This is also an interesting rule to memorize:

“In the event of a small stake relative to the deposit made, an administration fee may also be charged 5% of the deposit. If you are accessing our Website from Japan and/or India, We reserve the right to either cancel withdrawal requests or charge a 10% fee of the withdrawal amount should you request a withdrawal without having turned over deposits made before the withdrawal five times or more.”

Overall, everything went well with Casumo Casino, except for the confusion related to the KYC procedure. Eventually, the problem was fixed and the player received the requested money the same day. Worth noting is that the support team was round the clock, putting maximal effort to resolve the issue.

If you are interested in checking other reports by this tester, these are the articles to read:

Have you already visited Casumo Casino? If so, what was your experience like? Share it with us in the comments section below, and as ever- gamble responsibly!

“one could assume that everything went well, with no major delays but there were some confusing moments...”

Another great test, thanks for the very helpful report. Glad to hear everything went smoothly.

Overall, everything went pretty smoothly, except for the KYC procedure, but I'm sure it's a problem that they will definitely solve.

Always good to see a casino pass the “From the Players For the Players” test and show how trustworthy it is.

The KYC procedure seems to have made the entire process more complicated. But the support team was always on the spot to help resolve the issues. Great report, as always, providing us with so many details.