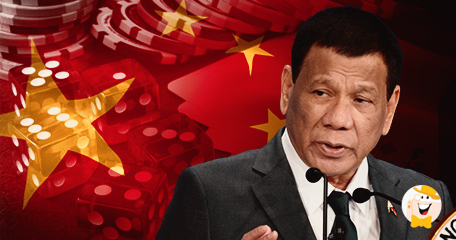 China and the Philippines are at a crossroads regarding online gambling which has caused a lot of controversy between the two Asian nations. China has called on for the Pacific country to put an end to this gambling vertical, citing concerns about the fate of Chinese citizens who are lured into gambling business as expats.

However, Philippines' controversial president, Rodrigo Duterte, has rejected these calls from Chinese officials and has announced online gambling will continue as planned, despite this.

Relations Between Two Countries at Stake

Duerte simply said: “I decided that we need it. Many will lose jobs [if it stops].”

Chinese officials claim that the online gambling industry in Manila is targeting their citizens through Philippine Offshore Gaming Operators (POGO). China's officials even described gaming as the “most dangerous tumor in modern society detested by people all across the world” when he called for a complete ban of iGaming.

There is one good reason why Duterte will not get rid of POGOs...

...which is, this year alone, they're expected to deliver $154 million in license fees alone. The online gambling industry in the Philippines capital employs circa 350,000 people. Over 100,000 of these are Chinese, mostly employed in marketing and customer service.

Duterte promised a stiffer government supervision of this industry and reminded operators that they need to adhere to remittance, lest they be shut down.

Philippine Amusement and Gaming Corporation (PAGCOR) has also rejected any claims that Chinese citizens are affected by gaming in this country...

...as Benjamin Diokno, Bangko Sentral ng Pilipinas, pointed out that online gambling companies are not involved in money laundering, and added:

“What if all of a sudden they decide to pack up and leave? What will be the impact of that on the property sector, also the food industry, the restaurants? This is part of my job as BSP governor.”

PAGCOR has, it has to be said, suspended the awarding of offshore licenses until at least the end of 2019.

The call for an online gambling ban in the Philippines follows what seems to be a trend in South East Asia...

...because it was the government of Cambodia that recently banned all online gambling operations in this country, due to an unprecedented number of illegal operators flooding the market.

On August 18th, Prime Minister, Hun Sen, signed a decree that will see all 150 operators shut down their businesses. International as well as Cambodian players have been targeted by illegal operators who often cheated and extorted money from players.

“citing concerns about the fate of Chinese citizens”

I didn't really follow up the online casinos in South East Asian countries. Philippines has 50 licensed operators. 50 offshore operators are many, but not too many as Cambodia... They have 150 operators, huh. Phnom Penh should be full of Chinese and Vietnamese people.

Oh China... you can delete rights and individual freedoms to your citizens, its okay, they accept it, live with it, grow better, but please, get out of any other country, massive population and cheapest cost production doesnt mean the next imperialist country,, you can buy African countries, Venezuela, but... remember that...

Oh China... you can delete rights and individual freedoms to your citizens, its okay, they accept it, live with it, grow better, but please, get out of any other country, massive population and cheapest cost production doesnt mean the next imperialist country,, you can buy African countries, Venezuela, but... remember that people can just kick you from their lands, unless you are ready to send armed forces to apply your law and restrictions so far from your country... that will be a shame. Remember, you do credits to others and u know that they dont have money, but tons of oil, Venezuela, so, you are indirectly asking for oil, and for the entire country too. and financing a criminal government. You china govt are too the sugar daddy of few african govts, just to put your navy in the zone. Ok, i dislike the USA neo-imperialism, and you was a hope, years ago, to finish with a superpower, but, i dont want another superpower, i want a cooperative healthy world, not a monopoly game. I hope, like the last empires, still fighting for the leftovers, china and usa put the foots in the floor, and a circular economy improves worlwide asap, so china if they want to have that economic power, they will need to be a example in circular products, and let go that love to the pollution and dreams to be another neo-imperialist country. Let the countries work in their own if they arent asking for your help, worry about hungry kids not about gambling, huh

China should really not involve in other countries' business – as anyone else!