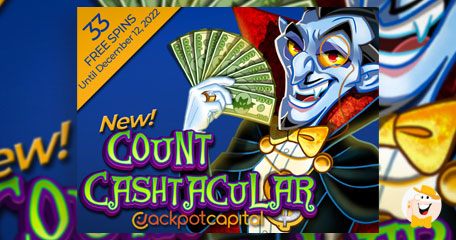 A Halloween Slot from 2011 Finally Gets the Long-Awaited Sequel

With Halloween rapidly approaching, there is a new vampire story to be told and what better way than through a sequel? If you remember Count Spectacular from 2011, get ready for a new ghoulish game by Realtime Gaming, called Count Cashtacular!

The slot is coming soon to Jackpot Capital Casino and if you want to take it for a spin before anybody else, take the advantage of introductory spins available until December 12th.

The Return of Grinning Vampire

It has been 11 years since the initial launch of Count Spectacular. It still presents one of RTG’s greatest slots to which players gladly return. In case you forgot, it plays out on a 5x3 layout with 25 ways to win, while the main features are wilds, complimentary spins, expanding symbols, respins, and scatters.

After so many Halloween holidays and bonuses it is finally time to go back to basics as Jackpot Capital is set to unveil a ghoulish new video slot from the provider with a unique new bonus.

Count Cashtacular has a grinning vampire as its wild symbol this time, and it is possible to trigger the Pick Bonus minigame where one may choose between two bonus spins offers.

The promo will run until December 12th and if you’re an active player, there are 33 honorary spins waiting for you plus a 150% deposit bonus with another 30 complimentary spins.

Unlike its predecessor, Count Cashtacular is a medium-volatility game with five reels and 25 paylines. However, the maximum payout cap is up to 50,000x the winning bet.

Its biggest highlight is The Pick Bonus feature, which is triggered when Count Cashtacular symbols appear simultaneously on the first and last reel. Players can then select 12 minigames with triple prizes or 5 re-spins. The best thing, these free treats can even be re-triggered.

Keep in mind that if you choose five re-spins, the Count Cashtacular wilds are held in place for all five spins.

This offer Includes 30 complimentary spins on Count Cashtacular with a bonus code CASHTACULAR. A minimum deposit of $35 is compulsory.

You can still tune in for the Desert Raider promo in case you missed it. The offer stands from September 14 to November 14, 2022 and there are 40 honorary spins on Desert Raider to be claimed until this date.

By the way, this promo is available to all players that have made a deposit in previous 15 days too. Use a different coupon code RAIDER when claiming and fight with other players to win up to $180 during extra spins.

Luckily I got to play count cashtacular already, and I ADORE IT. I enjoy the halloween themed slots year round and this time of the year was just perfect waking up to this new slot. Thanks for the article.

Count Spectacular was one of my favourite RTG slots. It's a great thing they decided to release its sequel. Can't wait to try it!

This is like going back to the past only the new slot is a lot better of course! Respect for sharing the info about the bonuses!!