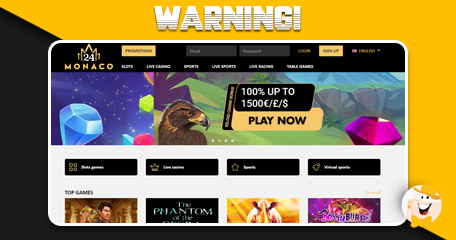 Another week, another story of bad guys’ downfall - thanks mostly to our inquisitive team of investigators!

This time, it’s the 24 Monaco Casino (not listed on LCB) that we have to warn you about, as we penetrate into the core of their wrongdoings called hosting the counterfeit games, which is a great no-no.

Details of the Mischief

It all began on the 24 Monaco complaints Forum thread…

…when one of our team members got a private message from our Forum member in which first allegations were uttered: that Playtech’s games on this online casino are not genuine - and this was confirmed to the member by Playtech themselves!

That tipped them off, and off we went into another round of investigation.

Our findings were extensive, to say the least:

We found Amuzegaming’s blogspot page where we found download link for the game files.

To make sure we are indeed seeing what is there for everyone to see, we relayed this to our contacts at NetEnt.

They have confirmed to us that their games at 24 Monaco are indeed fake versions and that their legal team will work on taking down these games from the internet.

That pretty much wraps this unfortunate story. It’s a short but certainly striking cautionary tale, so now you know to steer away from 23 Monaco Casino.

The Track record of Rogueness

This marks the FOURTH rogue report of September 2020…

…as previously we warned you about even more counterfeit slot games at Rich Prize Casino while Casollo Casino got themselves a special place in our Rogue Casino Hall of Infamous for poorly responsive support and denied or delayed payments.

Fountain Casino topped the lot when they violated not one casino practice but several: for hosting fake games, not having a valid license and serving games with dubious ethical nature.

But in the end - we caught them all red-handed, so that’s one thing to rejoice about in this whole mess!

“Another week, another story of bad guys’ downfall”

We would like to thank our member who noticed that 24 Monaco Casino doesn't have genuine Playtech games and advised us about this immediately. Be careful LCB'ers, 24 Monaco Casino is the third casino caught with fake games this September.

So many fake games at this brand ... glad they are caught!

Another casino caught red-handed. The list of fake games is pretty much big. Glad they have been discovered and our community has been informed.

Too many casinos like this lately, luckily the whole LCB team has done another great job

Shame on them. kudos to LCB team!