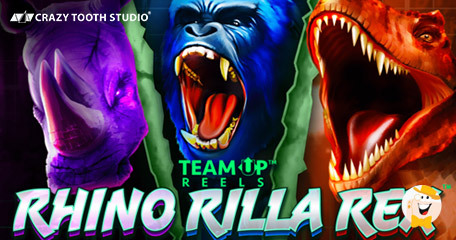 Famous for its unique approach, immersive themes, and mighty features, Crazy Tooth Studio has enriched its colorful portfolio with one more original online slot. Taking place on a mysterious island, the newest addition to the creative developer’s portfolio introduces players to a trio of gargantuan beasts.

Dubbed Rhino Rilla Rex™, this work of art displays fantastic illustrations and lots of victorious sound effects, along with a great assortment of features. Some of the elements to pay special attention to are Bonus Spins and Team Up feature, as they can result in massive prizes.

What Happens When the Beasts Combine?

Taking place in a lush jungle situated on a mysterious island, the game takes punters on an authentic journey, where numerous surprises and rewards await.

Even from the name of the game itself…

…it is quite evident that Rhino Rilla Rex™ is much more than an average dinosaur-themed slot game. Wanting to make the gameplay as suspenseful as possible, Crazy Tooth Studio incorporated not one but THREE gigantic beasts as main characters- a rhinoceros, a gorilla and a dinosaur.

What this forward-thinking studio is widely famous for are awesome illustrations and a vibrant set of colors, which is, once again, confirmed with the most recent addition to the CTS catalog. Making the atmosphere additionally suspenseful are the special audio effects, resulting in a genuine audio-visual spectacle.

Most Rewarding Set of Features

Accommodated on a 5x5 grid, Rhino Rilla Rex™ incorporates 3,125 winning ways and max win exposure of 1,767.92 x the bet. Let’s not forget to mention that it comes with ANY ADJACENT PAYS™ mechanism, which means winning combinations can land anywhere on the reels.

This highly-volatile release comes with an RTP of 96.2%, and a bet size ranging from 0.25 to 12.50, which is what makes it optimized for all profiles of players and versatile budgets.

Each of the three beasts…

…acts as a Full Stack Bonus symbol and it lands on a particular reel. For example, Rhino appears on the first reel, while Rilla is seen on the third reel only. Rex occupies the fifth reel.

Collecting 5 purple, 6 blue, 7 red, or 8 green tokens award the Rhino, Rilla, Rex, or Rhino Rilla Rex Beast prize respectively. Tokens can be granted only during Team-Up Feature or Team-Up Bonus spins. When the beasts combine, new creatures are unleashed bringing massive multipliers of up to 5x.

Would you like to catch a glimpse of the atmosphere of Rhino Rilla Rex online slot? Take a look at the official video and share your impressions with us in the comments section below!

Certainly not among hyper-productive studios, CTS delivers a couple of releases on a yearly basis, but each one of them becomes an instant hit. Following this beasts-inspired addition, players can expect 777 Super Big Buildup™ Deluxe™, scheduled to go live in July 2022.

As the name itself hints, this game bolsters BIG BuildUp™ Feature with extended reels, added wilds, multipliers, and the Deluxe Prize. Infused with high variance, RTP of 96.19%, and 576 ways, this fruit-themed game is meant to enchant fans of retro games.

LOL, what a great idea, to combine three colossal beasts in a single game and give it such a funny name! I think more features would make it look even more powerful.