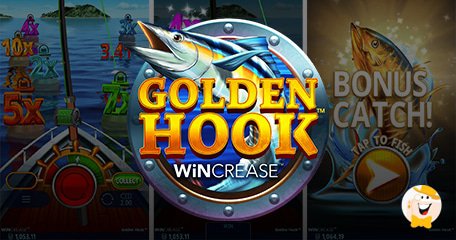 Crazy Tooth Studio, a forward-thinking developer of authentic online slots is about to enrich its colorful portfolio with a sea-themed adventure. Dubbed Golden Hook, the upcoming title takes punters to the crystal blue waters on a quest for unusual fish and immense underwater treasures.

Set to go live on December 8, 2021, the game brings a host of rewarding features, with WiNCREASE being the most noteworthy one. In terms of return to player percentage, it delivers 96.75%, while variance is medium.

A Sea Full of Features

No matter how slow-paced it may seem on the surface, fishing can transform into quite an adventure. Golden Hook by CTS is the best proof there is.

Punters are challenged to fight the fish…

…on their line, and watch the potential prizes increase. On the other hand, if they fight too long, the line may snap. Speaking of increased potential, there’s also a Multiplier Feature, WiNCREASE, boosting the catch for 2x, 3x, 4x, 5x, 7x, and even 10x. As a small reminder, this element has already been used in The Incredible Balloon Machine.

When players catch a golden tuna, they activate a Golden Hook™ Bonus. Fish of all sizes swim by the golden hook, each with a credit prize to be caught. Some of the surprises include a crab with a multiplier that doubles the bonus.

Take a look at the official trailer and let us know how you liked it in the comments section below after you finish reading the article!

As far as hinted on the official website, the upcoming year will bring two interesting additions to the catalog. One of them is 777 Rainbow Re-Spins™ equipped with Respin Insanity, while the other is Rhino Rilla Rex™.

Taking a look at their releases…

…players can spot a wide variety of themes and features. For example, Banana Drop™ hosts full-stack symbols and the action-filled Falling Banana Feature powered by BIG BuildUp™, which makes the reel grow. The same element is incorporated in Lucky Clucks, along with the Raise the Roof bonus and high volatility.

Furthermore, the creative team experimented with the grid, which resulted in See-Thru Reels™ presented in Ancient Warriors. Aside from this authentic solution, the game incorporates Stacked Multipliers, and Wild Transformation, altogether forming dynamic gameplay and epic wins.

Founded in 2011, CTS is a provider which utilizes INCISOR™, an in-house development framework, to build its cutting-edge products. From inspiration to installation, the entire team is dedicated to bringing innovative concepts to life.

…the studio joined forces with Microgaming, joining the rapidly growing network of independent studios operating under its umbrella. Slingshot Studios, Stormcraft Studios, Gameburger Studios, and Just For The Win are some of the many producers added to the roster.

This significant strategic deal with the gaming giant was crowned with a release of the Arctic Valor slot. Packed with 4,096 ways to win, Bonus Spins, Falling Icicle, and Any Adjacent Pays Mechanics, this winter adventure instantly gained the status of a blockbuster.

“the upcoming title takes punters to the crystal blue waters”

The game is tempting. I will definitely try it out.

They may not be the most productive, but they are definitely one of the most creative studios there are. This new game is a great choice for fans of fishing.