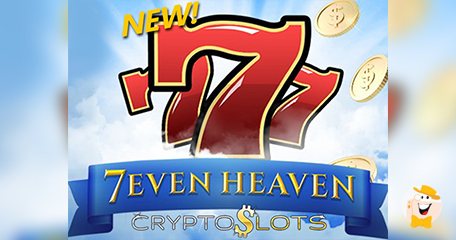 CryptoSlots, Slotland Entertainment-operated online casino announces one more fantastic addition to its colorful selection of online casino games. Added to the operator’s widely popular Mega Matrix Series, 7even Heaven brings 2 Wilds, a Pick Me Bonus and many other surprises.

As usual, the crypto-friendly operator has prepared a valuable promo, enabling players to check out this vintage-inspired story.  Players who make a qualifying deposit can claim a 100% match bonus and have fun exploring the newly-rolled-out slot adventure.

Spreading across the 7x4 diagram, Seven Heaven takes place among the heavenly clouds. As the reels spin, players get to listen to a beautiful soundtrack, which matches the atmosphere perfectly.

As for the symbols with special superpowers, Scatter is depicted as a Free Spins symbol and can award up to 21 bonus spins. If a player hits more Scatters during free spins mode, he/she receives one more complimentary spin.

Three or more Pick Me symbols…

… activate a bonus game where players click on symbols to reveal instant prizes. They begin clicking symbols on the lowest row and move to the next row with each winning selection. It’s important to note that coin prizes enlarge at each row.

As they do playing any game at CryptoSlots Casino, Seven Heaven players earn tokens to play the million-dollar Jackpot Trigger game.

How to Claim Introductory Bonuses on Seven Heaven?

Available until September 9, 2022, the promo is valid on Seven Heaven only and can be triggered with deposits ranging from $100 to $500. Players interested in claiming 100% Heavenly Boost should use the bonus code: 7HEAVEN. The code may be claimed twice. Wagering requirements are 38x.

In addition to this, there’s a Match Bonus for all Mega Matrix games. This deal comes with wagering requirements of 35x. Customers may redeem it up to three times a day via bonus code: MATRIXSLOTS.

The match percentage depends on the size of the deposit, and it is distributed as follows:

Wanting to bring even more value to its players, CryptoSlots casino came up with a brand new collection of Provably Fair games, called Mega Matrix slots.  Big Heads, Candy Paradise, and Zoomania  were the ice-breaking adventures from the collection, also celebrated with massive bonuses.

The whole idea behind the project was to offer thematically diverse stories coupled with captivating visuals and interesting features. They range from Pick Me Bonus, expanding double wilds, and free spins with multipliers all the way to mystery coins and the Double Chance feature. Aside from the abovementioned, the collection encompasses Shanghai Nights, Secret Garden, Bewitched, Aquatica, Cowboys VS Aliens Micro Monsters, Go for Gold, and many more.

“2 Wilds, a Pick Me Bonus, and many other surprises”

Great bonuses! The only downside is that the offer is time-limited!