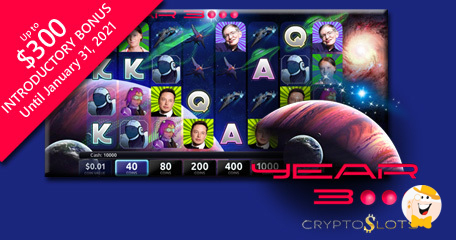 What do Stephen Hawking, Elon Musk and Greta Thunberg have in common? Not much, except the fact that they all feature in Cryptoslots Casino’s brand new Year 3000 slot for which the casino is giving away introductory bonuses until January 31st!

In this space-age futuristic slot, the grid comes in the peculiar 8x4 configuration, has Expanding Wilds and extra spins symbol that gives up to 50 extra spins.

Heroes of Our Time

Year 3000 is packed with robots and spaceships on the grid…

…while also featuring some of the most prolific, forward-thinking humans of our time, in the form of the world-renowned astrophysicist, inventor and entrepreneur and climate activist.

Beside the thrill of the new game, Cryptoslots casino is also offering an introductory bonus for players that deposit as little as $10. They will claim a bonus to play on the futuristic new slot game.

On its oversized grid with eight reels and four rows with stacked symbols on every second spin and expanding wilds, the game also comes with 40 pay-both-ways paylines. The betting range in the game is from 40 cents to $10.

"It’s fun seeing such familiar faces spinning on the reels. But it’s the Free Spins symbol that’s really going to pay out since they can award up to 50 free spins!”

May be claimed 3X per day; wagering requirement 35X. Valid for Year 3000 only.

30% MATCH BONUS – VALID FOR ALL SLOTS

Cryptoslots that uses only Bitcoin, Litecoins and Monero, processes deposits and withdrawals more quickly than many casinos and keeps transaction fees very low. It has dozens of unique slots including seven high limit games as well as ten types of video poker.

An interesting choice of characters, to say the least.