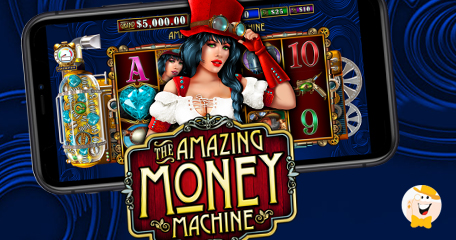 Month of May Starting with Imaginary Money Machines

After an epic voyage to ancient China, spicy Mexico and North American prairie, Pragmatic Play welcomes its players to a world of gears and 19th-century mechanisms, inspired by the intriguing imagination of Jules Verne himself.

Following the successful launch of Buffalo King Megaways on 29 April, it’s time to say “Hello” to another impressive project with a flexible grid that can expand to a 5x5 format with up to 60 paylines, called The Amazing Money Machine.

This online slot comes with a high volatility and a 96.42% RTP but there are plenty more surprises along the way.

By checking out the standard paying symbols, you will uncover that the prizes of up to 10x the stake don’t really touch the sky, figuratively speaking. However, the game comes with four types of Money Symbols, each awarding a specific trophy.

Starting with the classic Money Symbol, players will benefit from a random value based on the current bet, while the Wild Money Symbol has the potential to reveal more value at the end of the Respins round. During this mode, the Jackpot Money Symbol may appear and fill the meter on the left side of the screen, building up the tension and adrenaline. Finally, the fourth Money Symbol acts as the Mystery Symbol that hides its value until the end of the respins feature.

As you move on, you will notice the Money Machine on the left side of the screen that can randomly add Mystery, Wild Money, Wild standard, or Instant Jackpot Symbols on the reels during the base game. This component of the game is also active during the bonus round, where it can land the same symbols as in the base game, including the Jackpot Money Symbol.

Since Pragmatic Play focused mostly on The Money Respins Feature in this game, it is important to mention that it gets the Amazing Money Machine started. You can activate it by bringing any five Money Symbols on the screen while landing three Money Symbols on the middle reel allows you to change the format of the reels.

If you follow the provider’s roadmap on a regular basis, there is a great deal of chance you might recognize some of the features straight away. Nevertheless, the Respins round is different than those in Pyramid King or Pirate Gold Deluxe.

As described, the round starts with the Money Symbols that previously triggered the mode, only this time, each Money Symbol that lands, adds more Respins. The Money Machine is even active during this period, randomly adding Money Symbols and helping players fill the screen for a greater reward. In addition, the Machine can throw an Instant Jackpot Symbol on the reels, complementing the game with a Jackpot Bonus.

To reveal more about the Jackpot Bonus Game, you will have to cover the screen with small coins while their values remain hidden. The goal is to pick coins and selectively reveal the jackpots underneath them until you match three of the same kind. The game awards the corresponding reward out of the four pots available: Mini, Maxi, Major, and Grand.

While the Mini Jackpot comes with a prize of 25x the stake, it’s Maxi you should be after, as it is capable of awarding 50x the bet. The Major and Grand can even offer higher awards of 500x and 5,000x the stake!

Pragmatic Play is very proud of The Amazing Money Machine slot, as it brings a new epoch on the reels. The game alone is able to dish out top prizes of up to 5,100x the stake, but players also have an option to enter the Respins round and earn more cash as they collect new Money Symbols.

Get ready for a dynamic gaming experience full of jackpots and retro-futuristic elements, said the provider who also invites all enthusiasts to its ongoing tournaments with a recently increased pot up to €2 million.

“Pragmatic Play is very proud of The Amazing Money Machine slot, as it brings a new epoch on the reels. ”