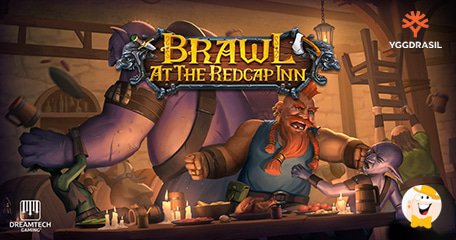 Right after presenting Jambo Crash and entering Greece, Yggdrasil Gaming is back with an epic medieval fantasy slot, Brawl at the Redcap Inn, designed and developed in partnership with Dreamtech.

The story is taking us to a high volatility setting where a group of warring tribes wages their battles in an epic medieval fantasy format, complemented with a dual reel setup and stacked symbols that provide additional wins.

Unlike some previous rollouts, such as the 3021 The Bounty Hunter or Golden Gorgon, this title comes with a 100-payline grid that gives players a chance to experience double wins due to the dual reel set.

During regular play, it is also possible to increase your potential for bigger wins with the Wild Swap feature. In case you’re wondering how, let’s just say that any wild appearing on either reel window is copied to the same position on the other reel window. Moreover, if these icons land at the same time, they become multiplier wilds with a x5 multiplier attached to them!

To achieve more wins, players must enter the Held Wild complimentary spins feature which is activated when five or more scatters appear across both reel sets. As a result, users will be awarded 10 honorary spins, where Stacked Symbols and the Wild Swap feature are preserved.

On a side note, the game also provides an additional opportunity to maximize the win potential by revealing sticky wilds. When players manage to land 5 scatters, they can retrigger this engaging feature and ensure the fun continues potentially to the optimal prize of 9,674x.

You might get surprised to know that Brawl at the Redcap Inn has become the sixth addition to the YG Masters collection by Dreamtech. It follows the studio’s recent releases Lotsa Lines and Labyrinth of Knossos MultiJump, all powered by GATI to provide a state-of-the-art technology and enable a host of partners to employ the preconfigured, regulation-ready, standardized development toolkit.

“Brawl at the Redcap Inn adds an exciting edge to dual reel slots. With every spin offering a chance to triumph, players can come out fighting and secure large multiplier wins. The game is huge fun to play, full of humor, and an all-round excellent job. Dreamtech has once again delivered,” commented Stuart McCarthy about the launch, head of product and programs at Yggdrasil.

Kristian Hassall, sales director at Dreamtech added that the combination of fun-filled mechanics and plentiful ways to win is key to creating engaging games. The company is pleased to launch the latest offering through the YG Masters program and can’t wait to see feedback as it rolls out across the entire network.

On 17 August, Yggdrasil Gaming has officially been granted a license by the Hellenic Gaming Commission allowing its best-in-class games portfolio to launch within the country’s borders and newly revised online gaming regulations.

The studio has already partnered with a number of major Greek operators and many upcoming partnerships will be announced over the next few months.

Apart from receiving the Greek license, Yggdrasil has made another important milestone recently when it acquired ISO/IEC27001 accreditation for compliance in security.

“Yggdrasil goes back to epic fantasy”

What a great title and concept for the game, can’t wait to give it a go. It’s definitely on my top 5 list now!