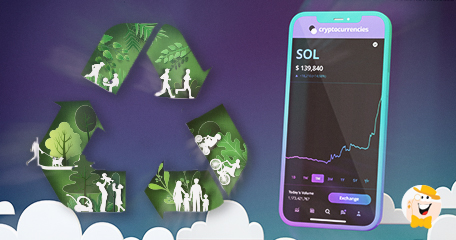 Can Crypto Mining Do Less Harm to Nature?

Being more than fertile ground for innovations, the online gambling industry has so far hosted many premieres and ice-breaking solutions. Cryptocurrencies are among those, praised as the future of payments in the entertainment sector.

However, as people started becoming more aware of the situation and more conscious about their environment, they realized that underneath the surface, crypto assets come with some major flaws. High energy consumption and carbon footprint are some of the burning issues, which is what inspired the development of eco-friendlier cryptocurrencies.

Without further ado, let’s take a closer look at crypto-assets which are putting efforts to minimize the carbon emission and make the transactions greener!

Based on the energy use report submitted by the company, transaction on the Solana network consumes less energy than 2 Google searches. That’s considerably lower than the processing power Bitcoin or Ethereum use at this moment.

In addition to this, Solanas’s blockchain enables fast transactions and has the ability to integrate with tokens from other networks. That’s what makes this asset well-suited for a variety of DeFi services, available on DApps. These are decentralized applications which are run on a peer-to-peer network, so it eliminates the additional costs.

To date, independent developers came up with over 500 DApps, the majority of which is related to financial transactions- lending/ borrowing. Some of them offer the possibility to trade NFT tokens, which means that SOL’s popularity is meant to grow further.

Unlike Bitcoin, this currency doesn’t require energy-intensive mining but utilizes available storage space on hard disks. Once the software is downloaded, the computer continues the farming. This process doesn’t require as huge amounts of electricity as traditional crypto assets.

While on the surface this sounded like a brilliant concept, it was spoiled by the “greedy” Chia farmers. Hoping to mine large amounts of XCH, these “enthusiasts” started purchasing as many hard drives as they could, which tripled the prices of the remaining ones on the market. Moreover, this resulted in reduced warranties on SSDs, which further led to a drop in Chia coins value.

On the other hand, there are claims that this currency is not as eco-friendly as it initially appears to be. Due to increased demand for computer hardware, the amount of e-waste grew as well. Still, in terms of energy consumption, it is much environmentally-friendlier than BTC.

This asset uses a proof-of-stake system called Ouroboros, which requires users to purchase tokens to join the network. By doing so, they save significant amounts of energy. Cardano is the first peer-reviewed blockchain-based protocol.

In terms of efficiency, it beats Bitcoin, as it can achieve 1,000 transactions a second. BTC can process only seven for the same period.

Often referred to as Ethereum’s biggest rival, AVAX also supports DeFi and DApps. It was one of the rare major crypto assets whose price went up when other currencies dropped in value.

AVAX enables fast and decentralized transactions, along with low transaction fees. Worth mentioning is that after purchasing NORI tokens, for “blockchain-backed carbon removal”, this currency became carbon neutral.

Initially based on Ethereum smart contracts, MATIC by Polygon is a popular choice of developers who hope to take advantage of the growth of DeFi, in particular borrowing and lending. As the team behind this asset says, being green is one of their imperatives, so they promised to put all the efforts into minimizing the carbon footprint.

Thanks to the perfect balance between speed, scalability, and security, ALGO quickly became spotted among crypto fans looking for greener alternatives. It supports smart contracts and has almost zero fees on user transactions. After purchasing carbon offsets, the company went carbon negative.

FIL utilizes the Interplanetary File Storage (IPFS) protocol and is meant to allow usage of empty storage space globally. This means that users with extra storage could offer that space at no additional cost to the environment, beyond the computer itself being switched on.

At the time being, Filecoin’s blockchain comprises 1.97 billion units. Those looking for low-cost storage pay in this currency, while users providing such space receive payments in FIL as well.

Built on the Terra network, this eco-friendly cryptocurrency allows for smart contracts and DApps development, as well as a variety of DeFi protocols.

By mimicking the day-to-day price stability of fiat currencies, LUNA creates stablecoins. Just like Tether relies on the US dollar to determine its value, this asset relies on multiple other currencies (EUR, JPY, GBP…) as a peg.

Speaking of the value, when the volume of transactions is on the rise, the native LUNA is sold to maintain the prices stable. When transactions decrease, LUNA is bought back. That’s how the price of stablecoins remains steady, while the price of LUNA changes, based on the market demands.

By supporting the Securitize platform, XTZ became one of the first projects which is compliant with the US Securities regulations. What’s even more, in 2021 its blockchain significantly reduced carbon emission compared to the usage in 2020. Precisely, the annual energy consumption for the Tezos network equals the footprint of 17 people.

Optimized to cater to the needs of smartphone users, this one allows users to use the recipient’s phone number to make payments. On top of that, it is designed to fit the consumers in areas where the banking sector is weak.

Currently limited to one billion tokens, CELO is supported by smart contracts and DApps for DeFi purposes. It also belongs to carbon negative networks. In terms of efficiency, it beats BTC as one block is processed in 5 seconds (for Bitcoin, the processing time is 10 minutes).

DAO stands for “decentralized autonomous organizations” and it is accommodated on the Ethereum blockchain. It is described as an internet community with a shared bank account.

One of DAO’s goals is to make venture capital accessible to a wider spectrum of people. The team behind is committed to helping with climate change.

This currency relies on Tangle, which is an alternative form of technology for those who are not interested in interfering with blockchain. No mining is required. As the number of users grows, this network improves.

On top of that, IOTA relies on the Internet of Things, which should make it possible for technical devices to communicate with one another. To be more precise, it uses smaller devices, which means less energy consumption. So far it seems quite promising.

To mine the traditional cryptocurrencies, you need high-powered computers which consume a vast amount of electricity. On top of that, the whole process relies on non-renewable energy sources, of which coal is the most problematic one.

Having in mind that countries all over the world, especially China where most of the mining takes place, are trying to minimize their carbon footprint, it was inevitable to come up with some greener solution. That’s what inspired the birth of crypto alternatives which are eco-friendlier.

One of the biggest benefits of eco-friendly cryptocurrencies is that they make a perfect balance between sustainability and efficiency. It is possible to transfer the money here and there quickly without doing lots of harm to nature.

They rely on renewable energy, efficient protocols, and smaller devices, which altogether does minimize the carbon footprint.

In terms of yearly energy consumption, Bitcoin mining consumes more energy than Sweden or Malaysia. This shocking fact once again confirms that healthier and greener alternatives are needed. They are already making their way to various aspects of our lives, online gambling included, showing that it is possible to have efficient and environmentally-conscious crypto transactions.

Have you already made transactions in any of the eco-friendly alternatives? Share you experience with us and the community, and as ever- gamble responsibly!

“Here are ten eco-friendly cryptocurrencies to watch out for in 2022”, businessinsider.in, January 11, 2022.

“minimize the carbon emission and make the transactions greener”

It's a start. But solutions need to be found and applied quick. I said it before. If we keep mining like now and nobody gives a f....., mining. Crypto will be its own dead. Zuckerberg doesn't care at all, never did , shaping Meta into something like the UEFA or Nestle of the internet. And Elon Musk literally, burns coal...

It's a start. But solutions need to be found and applied quick. I said it before. If we keep mining like now and nobody gives a f....., mining. Crypto will be its own dead. Zuckerberg doesn't care at all, never did , shaping Meta into something like the UEFA or Nestle of the internet. And Elon Musk literally, burns coal with the Chinese government. They want to create something like Frodos ring. One Crypto "to rule them all"Musk is using the same coal to mine his Dogcoins. It's the same Musk that one had this great idea about saving the planet with electric cars. Burning coal seemsa bit counterproductive to me.

This will be a great step raising eco awarness in society! Our world is becoming more and more virtual, but that doesn't mean we should neglect our nature and environment...

Always thinking of nature and if this is one more way without doing lots of harm to nature I definitely agree to it.

Always thinking of nature and if this is one more way without doing lots of harm to nature I definitely agree to it.

I support every idea that helps save our planet and raise awareness of the harm we are causing. We need to fix these problems and not leave them for future generations to deal with.

I strongly support these ideas and tendencies. If there are eco-friendlier alternatives, we should switch to them, and save our planet, before it becomes too late.