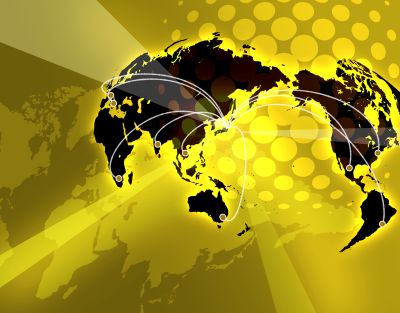 It was the influence of Japan who created art that would eventually be recognized around the world and make its way into the gambling industry. The popularity and demand for these adorable animated characters splashed across the reels of a Slot machine has captured the attention of not only the Asian community but an international level as well.

How can one resist the charms of the anime characters? It isn’t animated cartoon characters geared at just children. That is the beauty of this art form as it appeals kids from 1 to 92. It is exciting to see how amine has moved on over in Slot themes.

The Japanese animation has given software game developers inspiration in creative graphical techniques. The anime depicted on Slots are characterized by colorful graphics, lively characters that boast imaginative themes. These themes are compelling whether your drawn to the brilliant illustrations or you are gambler attracted to the magnetism of the game. 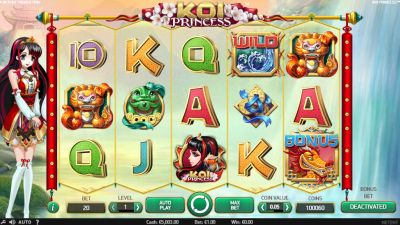 Koi Princess Slot– Developed by Net Entertainment software, the princess concept is prevalent in Japan’s pop music as well as anime. The 5 reel, 20 pay-line slot is compatible on desktop and mobile devices with coin denominations starting at 0.01 up to $1. It intrigues the spinner with an extraordinary Japanese sounds in state-of-the-art audio and the lovely princess watches with each spin of the reels to cheer you on. Highlights are plentifully including randomly triggered features in the base game. There are four Random features including: Random Wilds, 5-hit, Wild Reels and Bonus Game activation.

Bonus Wheel – Spin the wheel featuring three tiers divided in two 12 different locations. Roll the dice to move around the wheel and land on one of the following rewards: Multipliers up to 5x, Double Up, Arrow, Wild reels, Free Spins, Jackpot win and Collect. There is also a Bonus Activation feature awarding the player one Free Spin where 3 Bonus symbols are presented on reels 1, 3 and 5 with 1 Bonus Feature randomly awarded.

Sure Win Bonus – 10 Free Spins and during this feature every spin must be equal to or more than the amount won during the Bonus session. 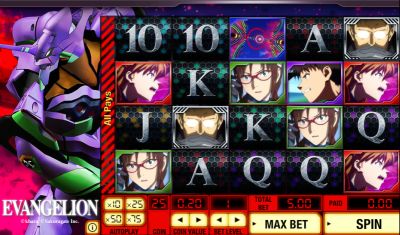 Evangelion Slot – From the software creators 888 Holdings, it based off the televised series that ran between 1995 to 1996. The Japanese action fantasy-science inspired creation takes place in a post-apocalyptical setting. It is Nerv against the Angels in a battle to save mankind. Other unforgettable characters include: Rei Ayanami, Asuka Langley Soryu, Shinji Ikari and Toji Suzuhara. This game has 5 reels with an impressive 1024 ways to win. Players will be motivated by the stereo soundtrack emanating in the background, premium anime graphics and special features.

If a player sees 3, 4 or 5 Gendo Ikari Scatter symbols splashed anywhere on the reels win up to 20 free spins. During this feature the main characters turn into Stacked Wilds and will expand across the entire reel increasing more chances to win.

Lady Bug Adventures Slot – Throw away the notion that this game is about a sweet innocent bug, in fact it is quite the contrary. Powered by iSoftBet software this theme revolves around the ‘Miraculous Lady Bug’ inspired by the Super Hero animated series that takes place in Paris. Character Marinette Chung is a high school girl who has the ability to alter herself into the heroine ‘Lady Bug’.

Watch with anticipation and wait for the Bonus symbol and Wild to face each other. This is when the real excitement begins with the Lady Luck and Black Cat Wheel Bonus. Here is the big chance to scoop up a Progressive Jackpot on the wheel. 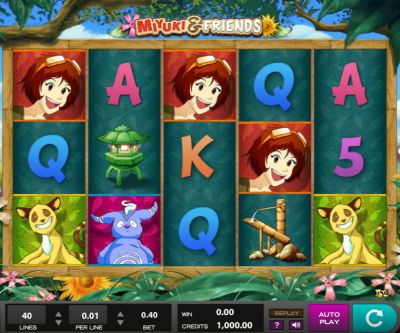 Miyuki & Friends Slot – High 5 Games won’t let you down in this original plot that takes spinners on a journey filled with adorable charm that could only be achieved in anime fashion. It is the Miyuki character that will capture your heart with a magnificent smile, long dark flowing hair and a pair of glasses that rests on top of her head. Other characters include a blue alien creature and a yellow being that has a resemblance to the cat family.

This 5 reel, 40 pay-line Slot embraces Japanese anime in cartoon style graphics. Pays are from left to right including other symbols like red airplane, water fountain, Chinese lantern with A, K, Q, J playing cards. Land the red airplane on reels 2, 3 and 4 to trigger the Free Spins feature. Chose one of the Scatter symbols that will determine which will be the super stack feature during Free Spins.

Magic Quest Slot – World Match software takes players on an unforgettable adventure in this fantasy themed storyline. The 5 reel, 25 pay-line Slot has coin denominations ranging from one cent to $25. The graphic design of the symbols is superb in creating this game with a magic ring, bear paw, golden key, golden crown, a green orc, a dark knight, a spell book, a club with pins and a magic potion bottle.

Three or more Scatter award 12 Free Spins and all wins are doubled. The Magic Quest Bonus game is triggered when the three symbols appear anywhere on the reels. A new screen will open where players will enter a hall filled with spell books resting on six racks. Choose spell books randomly to reveal cash prize won.

Japan-O-Rama – Rival powers a Japanese themed Slot that is a favorite among the online gambling community. The 5 reel, 20 pay-line game has crystal clear graphics with icons that are fun including: robots, sumo wrestlers, sushi, Japanese anime girl, Nintendo controller, porcelain cat, Katana, bullet train and ninja. The large scale of symbols fills the screen tossing aside the standard deck of card symbols so often found. Godzilla is Wild and will expand completely on a reel with a potential for winning big cash.

Features include the Geisha Bonus triggered when three or more Scatter symbols appear across the screen. Get up to 25 Free Spins with 5 Scatters and all games have a 3x multiplier on all wins during Bonus.

Get three or more Sumo Wrestler symbols and activate the Bonus game. Players will have a chance to win while playing Pachinko. Winnings from this game are based entirely where the metal balls land.

Karate Pig – You might quickly fall in love with this cute pink pig who is the star of this show. This is the mastermind of Microgaming software who combines some of Japan’s elements that are world-wide sensations. The 5 reel, 40 pay-line Video Slot starts at 40p up to £20 a spin. Watch as the Japanese pig can out preform most with multiple challenges as karate champ, musician, philosopher, sushi chef and samurai. There is nothing little about this game with a potential to win a staggering £80,000 during the Free Spins feature. Trigger this feature by landing a gold coin on reels 1 and 5 and receive 15 Free Spins and a 2x multiplier to double wins.

Karate Bonus – Trigger this feature by getting at least 3 Bonus Pig symbols anywhere on the reels to get one to play either the Pork Chop or Hammer Bonus. Chose from 6 symbols to reveal cash prizes in either bonus. Karate Belts are earned every time this feature is played. Collect 7 to become a Black Belt and you’ll get a chance to play the Final Showdown Bonus. The battle begins with a three round showdown between the Karate Pig and his opponent and if Karate Pig wins you could stand to win up to £1,060 in total cash.

Naughty Ninjas Slot – Done in anime style, Wager Gaming Technology (WGS) pulls off an incredible game that is a hit among the gambling community. It strays away from the typical ninja characters but still maintains the ninja appeal in a dress that is all their own. Don’t confuse Bubbles with a pirate because this brunette girl in the red bandana is all ninja through and through. Standard 5 reels with 25 pay-lines it gives players possible potential to win a handsome $20,000 Jackpot.

The Ninja Star is the Scattered symbol that will only appear on reel 3. Once triggered it will expand covering the entire reel and reward the Re-Spin feature. The Ninja Star will substitute for all symbols including Bubbles.

Magical Stacks – Playtech jumps in the anime themed Slot craze and develops a Japanese inspired game. The setting is in Tokyo late at night and the featured character will pink hair and round huge eyes will draw you in immediately. The 5-reel slot features 20 pay-lines and has pretty standard symbols including the A, K, Q and J, cherries, watermelons, bells, bars, purple sevens and white hair girls. After all there is only room for extraordinary anime girl characters who steal the show.

Free Games are triggered after landing three or more Cat Scatter symbols anywhere on the reels awarding 10 Free Spins and a multiplier between 2x and 6x. Watch for the Chinese Gold Coin on reel 5 because that will increase your multiplier each time to the maximum allowed. Beware though because each time the coin does not appear your multiplier will decrease by 1 for a minimum of 2x.

Mystery Stacks feature – The mystery here is when cubes will randomly appear during normal gameplay and during the Free Spins round. These cubes will change transforming into one of the symbols. If lucky it will match other symbols on the reels with potential to win big cash prizes.

If you are an avid gambler you know a good Slot machine when you see it and if you are not, then most likely you have a keen eye to recognize excellent art and animation. Many of the anime Slots are available to play for free before placing real money wagers. Unfortunately, “a pretty anime face” isn’t enough to gamble your bankroll on. It requires playing at the best online Casinos that are built on integrity. What is fortunate is LCB has plenty of information made available to guide players in the right direction.