Prepare for Lots of Egg-ventures with 9 Easter-themed Slots 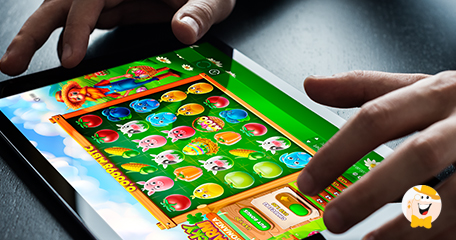 The Easter Egg Hunt Is On!

Commemorating the resurrection of Jesus from the dead, Easter is celebrated in almost every corner of the world. Though the customs vary from one country to another, most commonly people prepare some traditional food and dye the eggs not only in red but in all other colors as well.

As this holiday is associated with lots of picturesque symbols, it doesn’t come as a surprise that online game providers use it frequently to develop versatile Easter-themed slots and bingo games. Crowded with tons of vibrantly painted symbols, these releases are bound to deliver tons of egg-citing moments and egg-stra valuable rewards.

Wazdan, RTG, Pragmatic Play, and Synot Games are just some of the numerous studios whose portfolios accommodate some egg-cellent installments. We have done our best into gathering the most egg-citing releases in one place, so stay tuned! 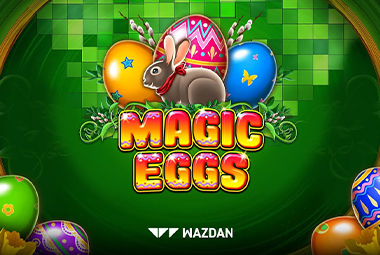 Comes from a multi-award-winning studio Magic Eggs is filled with colorful Easter eggs and the Easter bunny that acts as both the valued Special symbol and the highest paying icon in the game. If any three low-value symbols appear on a bet line accompanied by the Special symbol- a win is paid.

Spreading across three reels, this Easter-inspired slot game is home to 5 paylines and an RTP of 96.41%. Worth adding is that this title incorporates a couple of Unique Wazdan Features- Big Screen Mode, Ultra-Fast Mode, Unique Gamble Feature, and Volatility levels, which enable punters to adjust variance based on personal preferences. 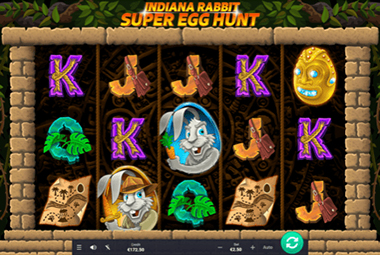 Get ready for a true egg-venture this Easter, as Indiana Rabbit, the famous archeologist is preparing for a new mission. Determined to find the precious golden eggs of the forgotten rabbit civilization, he embarks on a special adventure- Super Egg Hunt.

Set on a 5x3 diagram, this Easter-inspired online slot by Oryx Gaming displays medium variance. Thanks to adjustable return to player percentage which ranges from 88.08% to 96.09%, “everybunny” can tailor the gameplay based on individual preferences.

Indiana Rabbit represents the highest-paying symbol of the game. It serves both as a replacement for regular high-paying Rabbit in the base game and as a Scatter which initiates the free spins feature. Depending on the number of Scatters which hit the reels, a punter can score up to 15 bonus spins. 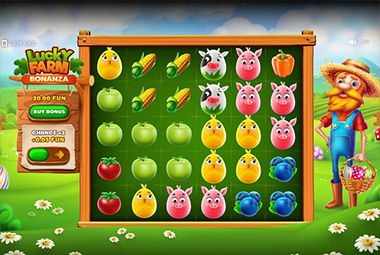 Although presented on April 1, 2022, Lucky Farm Bonanza is most certainly not one of those pranks for April Fools’ Day. With reels covered in fruits, veggies, and animals shaped to resemble eggs, this installment by BGaming gives punters a unique opportunity to create and look after a farm.

Exploring the features, players shall spot bonus spins, Refilling Reels, Buy Bonus, and Chance x2. Refilling adds more consecutive wins on every spin and continues until there are no more winning combinations appearing as the result of a Refill. Chance x2 feature increases the bet and gives a consumer more chances to play bonus games.

Lucky Farm Bonanza, which is spread across a 5x6 grid, comes with a max win potential of x15,000. It has high volatility and a return to player percentage of 96%. 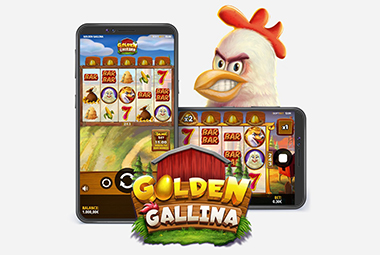 Eager to treat players with an egg-stravagant winning opportunities, iSoftBet added the Golden Gallina slot to its portfolio. With chickens, baby chicks, and foxes filling the reels, this 3x5 colorful adventure with 243 ways to win takes place in a farmyard.

One of the most prominent features in the game is Gallina Spin, which can be activated randomly on any spin during the base game. This happens if a special golden egg symbol lands on reels 2, 3, and 4. Worth noting is that those icons act as a wild and multipliers. Also, the Bonus Buy feature is available in specific jurisdictions, unlocking direct access to the free spins feature. 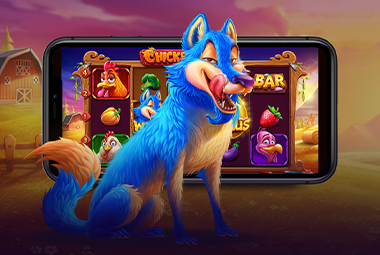 Chickens are one of the central symbols of Easter, which is why many developers like to build their Easter-inspired slot adventures around them. Chicken Chase by Pragmatic Play is one of such games, portraying the story of a hungry wolf going after the farmer’s poultry.

Though the title itself does indicate that there’s plenty of action taking place in every corner of the reel grid, this is actually a slower game. That’s mainly due to lower volatility, and the varying RTP percentage which spans from 94.55% to 96.48%.

On the other hand, it does come with more than a solid selection of features. Landing 3 or more golden egg bonus symbols activates the bonus feature with an instant prize in form of a multiplier (up to 150x the bet). There’s Spin and Hold as well, which puts two options before punters- to either select the reels they want to hold for a respin or let the game randomly picks them. 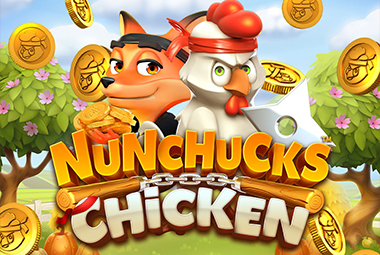 If you think that Easter and martial arts have nothing in common, well, Skywind Group has found a way to reassure you. Taking place on a 5x5 layout, Nunchucks Chicken Gallo Nunchucks brings 25 ways to win, high volatility, and return to player percentage of 96.50%.

As for the features, it comes with Ninja Respin, which increases random multipliers until a player wins, while Shuriken Showdown, triggered when 3 scatters land on the central reels, reveals prizes and boosters. There’s also a Buy In feature which guarantees the activation of Shuriken Showdown, as well as Ante Bet which doubles the chance of triggering it (at an additional cost), of course. 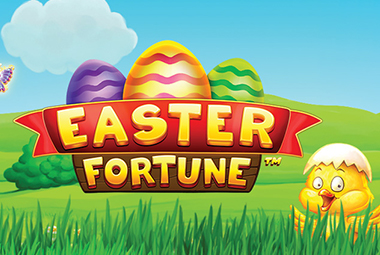 Determined to wake players up from the winter slumber, the Easter Fortune slot by Synot Games introduces them to a gang of creatures with floppy ears, iridescent butterflies, and shiny eggshells. Organized as a 3x5 diagram, this Easter-themed online slot features 15 fixed paylines which pay leftmost to right.

Butterflies are in charge of granting up to 10 bonus rounds when three of them appear on the first, second, or third reel. A colorful egg represents the Scatter and can land on the third, fourth, or fifth reel, awarding a bonus game whose potential can climb all the way up to 300x the bet.

Decorated with the most beautiful flowers, the egg basket acts as Wild and can substitute all the other icons, except for the bonus symbol, Scatter, or the one which delivers bonus spins. Let’s not forget to mention the Gamble Feature where the punter is challenged to select the color of the next revealed card and double the wins (if he/she guesses it, of course). 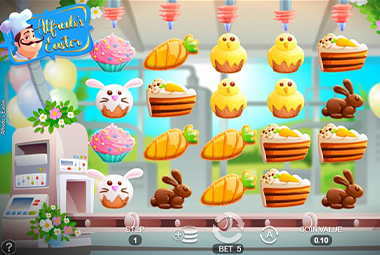 Someone needs to be in charge of making the most delicious treats for Easter, and there’s no better person to do so but Alfredo. Situated on a 4x5 layout, Alfredo’s Easter by Espresso Games presents punters with the most delicious set of symbols such as chocolate bunnies, rabbit-shaped muffins, and much more.

What comes as quite interesting is that this game has 5 different steps. A player picks one, so the payouts are multiplied by the chosen step. There are separate paytables for each of the steps. Matching icons on adjacent reels starting from the leftmost one form a winning combo.

Regarding the features, there’s Blue Glaze Wild, which lands anywhere on reels 1,2,3, or 4. There’s also Infinite Free Spins feature where the cake machine can activate and vacuum all the icons on the reels, and award an additional spin. Alfredo’s Bonus is initiated when a bonus symbol lands on the third reel. Finally, the game bolsters three special prizes- Egg Multiplier, Eggs with Extra Win, and Big Egg Wild, all of which provide even better winning potential. 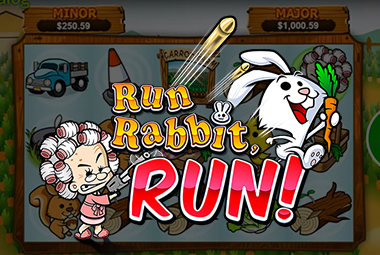 One of the most popular US-friendly casino games developers is also among studios preparing surprises for the upcoming Easter. Dubbed Run Rabbit, Run, this adventure by Realtime Gaming is bound to deliver “un-bunny-lievable” entertainment, not only thanks to amazing visuals and top-performing features but a catchy soundtrack as well.

Accommodated on a 3x5 grid, this game comes with 25 paylines and medium volatility. In terms of features, players can expect morphing wild symbols, extra wilds, prize multipliers, up to 1,000 bonus spins, and more. Let’s not forget to mention TWO jackpots (Minor and Major) that can be triggered randomly, making the overall game additionally challenging.

For those who prefer other genres, Spinmatic has prepared Golden Egg Easter, an Easter-themed online bingo game. Equipped with low to medium variance, this 90-ball bingo game comes with an RTP of 95.63%. It comes with Turbo Play, Instant Mode, an abundance of themed details, and tons of top-quality entertainment.

A Couple of Amazing Easter Facts

We are pretty sure that there are plenty of chocolate bunnies fans among you, which is why this is one of the festive facts that will surprise you the most - 59% of people consume the ears first. Around 90 million chocolate bunnies are sold for Easter.

…1.5 Million Cadbury Creme Eggs are made every day. Interestingly, Easter and Halloween compete for the highest candy sales. Chocolate is not the only treat people opt for to sweeten up this jolly holiday. Americans eat over 16 million jelly beans during Easter.

Egg dyes were once made out of natural items such as onion peels, tree bark, flower petals, and juices, but now you have a whole assortment of artificial dyes and accompanying decorations used for this purpose. The world’s largest Easter egg weighs in at 5000lbs is located in Vegreville, Alberta, Canada.

Ensuring players are given lots of opportunities to grab additional credits and play amazing online slots, casinos all over the globe came up with tons of egg-cellent promotional events. If you are interested in claiming some of those, check out our dedicated page with Easter bonuses.

What’s your favorite Easter-related tradition? How do you usually observe this holiday? Don’t hesitate to share it with us and the players in the comments section below.

“the most egg-citing releases in one place”

Out of all these featured games, I was able to play “Run Rabbit Run” — which was lots of fun. I’m not sure the other games are being hosted in casinos that allow US to play.

Interesting choices, I think I'll start my holiday with the Nunchucks Chicken but I am planning to try my luck with all these games! Good luck to me :D

Every holiday season has its own set of themed games and this one will be very colorful. Wazdan's Magic Eggs has quickly become my favorite game!

Thanks for gathering all the games! This Easter is going to be very egg-citing!

Great article, very detailed! Gonna be a fun Easter with so many games!