The Simplest Way to Understanding Online Gambling Regulation in Germany 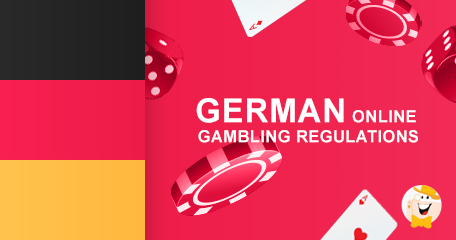 As Germany announces a new set of regulations for online slots licensing regime in the country, targeting primarily commercial operators, social responsibility and gambling-related harm reduce, more and more software providers are making significant changes of their business practices to provide customers with the best solution and comply with the newly implemented measures.

Although the new set of rules will formally come into effect in July 2021, the regulator has confirmed a policy of transitional tolerance, after which the relevant licences can be issued. Operators may engage with the German jurisdiction by adopting new regulatory measures stated below, while those that ignore them may be excluded from the pre-scheduled official licensing procedure.

How to Become Compliant

As stated in the official German Toleration Criteria and Compliance Rules on 15 October 2020, online slots sites that want to apply for a license in 2021 must remove all live gaming products, including live dealer roulette and blackjack games. This resolution refers to other variations of similar play types, such as card table games as well as RNG variations and more.

One of the most severe measures is that operators can no longer refer to their site as a 'casino' and this is stricted for land-based operations. Leading software providers with a preference to become socially responsible and compliant with the German Toleration Regime are at this point:

“Compliance, regulation and responsible gambling sits at the center of our core product offering and this is why we are amongst the first suppliers in the German market to have our platform and a sizable proportion of our content fully compliant with the German transition period guidelines. We look forward to using our collected experience and understanding of the German regulation requirements and working together with our partners to help them further outperform in this exciting and growing market.”

Among other changes that have been made with the aims of protecting the player include deposit caps of no more than €1,000 per month, per brand. Also, the venue must implement reality check every 60 minutes, as well as a 5-minute cool off period before play can be resumed.

A 'Panic button' now has to be displayed at all times, allowing players to instantly exclude themselves from the casino at any point! Lastly, free-to-play games and demo versions are no longer permitted for German players.

In order to comply with Germany’s new regulations, affiliates will also have to make a series of changes and adapt their websites accordingly.

The changes apply to:

On a side note, German players will only have access to slot games in the future, as live casino, table games and jackpot games are no longer permitted (this list encompasses blackjack, roulette, baccarat and live dealers).

Likewise, images of blackjack, roulette or any kind of live casino game, including jackpot amounts will not be tolerated after the transitional period. A similar policy refers to “misleading terms and vague wording” such as Qasino, Cesino, C@sino or Cozino, which is completely forbidden.

In conclusion, pre-paid PaySafe Cards will no longer be accepted as a payment method and must be removed as a depositing/withdrawing method. PaySafe wallets on the other hand are still accepted.

How Long Before the New Regulation Comes into Force?

Changes that are happening in Germany must be finalized by the 15 July 2021, which is the exact date when the new regulation will come into force.

However, starting from the 15th of October 2020, there will be a so-called Tolerance Period, during which all interested parties (providers as well as operators) can engage with the market, provided they had adopted the new regulatory measures. It is stated that betting companies who ignore new iGaming regulations in Germany may be excluded from any future licensing indefinitely.

“Microgaming is a socially responsible business that broadly supports the regulatory changes in Germany, where we will be providing our customers with a solution that includes some of our most popular and successful titles – long before the new gambling laws coming into force next year.”

Endorphina has also joined the growing list of suppliers whose game production will be adapted to the new German regulation. According to CEO, Jan Urbanec, the company is proud of collaborating with operators in the country at an accelerated pace, predicting high-end results in the upcoming period. Both the studio’s legal and development team are working on meeting the German regulation policy to avoid any potential interruption of the player's experience.

By complying with Germany’s new regulations regarding iGaming, Endorphina is also keeping high quality standards of its far-reaching products, which are now available in German, have a minimum 5-second spin and no auto-spin option, but display win probability and RTP are very much shown on screen, as requested by the regulator.

Update : NorthrhineWestphalia is the first state that offers 5 licences that allow online live Casino games again. The license can only be used in NorthrhineWestphalia and only player that are registered in NRW can play Live casinos games. Isn't that amazing? The lawmakers worked 10 years!!!on the laws. 8 months since they...

Update : NorthrhineWestphalia is the first state that offers 5 licences that allow online live Casino games again. The license can only be used in NorthrhineWestphalia and only player that are registered in NRW can play Live casinos games. Isn't that amazing? The lawmakers worked 10 years!!!on the laws. 8 months since they been launched. That's my tax money well spent. Let's see what the other 15 states do. The next month's will be so much fun

Hi Alex. Thanks for you advice. The laws are protecting the players only if they are online. I can only deposit 1000 Euro max. In a month.Or I could walk in the next real casino, play roulette betting 1000 Euro as many numbers I like. Or blackjack for 1000euro each game. No law protects me there.

Hi Frankie, please play responsibly and go easy on the budget. The new laws are explicit about protecting players from overspending money online. Take it easy and thanks for commenting!

Black Jack can still be played live as Black Jack is "by definition not a casino game". Our lawmakers love coming up with things like that. Not everything about the new laws is bad. Bonus must be realistic and the rules ar easy to understand. I just try to understand how the 1000 Euro max deposit a month and the 1 euro...

Black Jack can still be played live as Black Jack is "by definition not a casino game". Our lawmakers love coming up with things like that. Not everything about the new laws is bad. Bonus must be realistic and the rules ar easy to understand. I just try to understand how the 1000 Euro max deposit a month and the 1 euro max a Spin is going to protect me from gambling addiction and debt. Because even I can't play online the rest of the month anymore, I can walk into a Landcasino at any time playing live roulette or Poker using any amount per round or spin I like

Thanks for sharing the news. Many new things applied in a short period of time.

Agree, this is too strict. I was under the impression Germany is getting more open-minded in the matters of online gambling, but not like this.

Well it seems to me that Germany is finally doing something about the status of its semi-regulated market. Hopefully the players will be satisfied, although many measures here appear to be pretty strict... I guess you gotta start somewhere.