El Royale Casino Withdrawals: Are They Fast? Let’s Find Out! 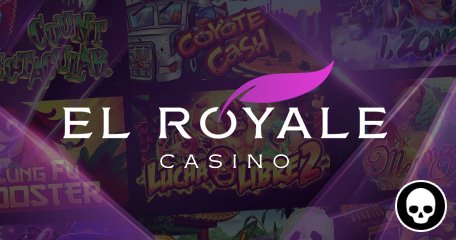 It has recently come to our attention that players at El Royale Casino are allegedly having troubles with regards to delayed payments. The US-friendly RTG hub regularly scores high marks as an all-around respectable gaming site and any serious offense, such as withdrawal issues, shouldn’t be part of the package of any solid casino.

LCB set out to investigate the withdrawal process of the site in an attempt to either corroborate or dispel the claims made by several patrons, and also find out the reason why in case of the former.

Over the course of 3 days – 18, 19 and 20 September 2020. – we played several slot and video poker games with a deposit of $1000 worth of BTC made via Coinbase. The registration and depositing processes, as well as the lobby, are typical of an average RTG-powered operator, with nothing out of the ordinary to report.

Once our balance reached $750, we decided the amount is sufficient to make an attempt at a cash-out request and see how well the casino handles it. As per their T&Cs, withdrawal requests are approved only after identity verification has been successfully completed. We submitted the necessary documents on September 20, right before we were ready to cash-out.

…on September 24, the casino emailed and notified us that the logo was not visible on our Account Validation Form. Apparently, we made a few typos and errors somewhere in the process which caused this slight delay.

However, it took the operator 4 days to respond in between each of the emails we exchanged in an attempt to correct the errors. Once resolved, we were able to continue the verification procedure, which also included one verification call on September 24. Another week went by before the documents were approved and the withdrawal made on September 30. Although these delays were partly our fault, we still felt the time it took to finally verify our identity was longer than necessary.

Up until this point, everything went quite smooth without major issues on the part of El Royale, however, the next step is where they failed to deliver a satisfying outcome.

$750 Withdrawal Request and an Unpleasant Surprise

Namely, we sent a withdrawal request for the full amount of $750, but received only $350 on October 5. The pending time was reasonable, even if slightly longer than stated 3 business days. Our email inquiry went unanswered for a full day, and we subsequently turned to Live Chat for help.

They informed us that “the casino reserves the right to send winnings divided into smaller amounts”, so we had to make another payout request for the remaining sum.

Via email, the operator offered a more elaborate explanation: maximum payout amount and approval times are determined by the Customer Level that depends on a range of factors including reputation with El Royale, credit scores, deposit type and frequency, duration and outcome of gaming sessions, adopted payout methods, the frequency of reversing payouts and membership duration.

Having played for only 3 days…

…the progress made was insufficient to account for a higher-ranking status and better terms on withdrawals. This somewhat justifies the incremental payments but not another week which passed before we received the final payment of $400 on October 12.

It took El Royale Casino around 3 weeks to pay the requested amount of $750 in full – in two installments on September 30  and October 12. Aside from sending partial amounts, the casino had no other reason to delay the payment.

The responsiveness during the ID verification process was unsatisfactory, with 4 days in between each email exchange.

We found the cash-out times of El Royale to be quite long, especially for new customers who haven’t yet made it to the higher reputation levels to secure more favorable terms. Even though the incremental payments rule is mentioned in the T&Cs, we feel that amounts below $1000 should be excluded from this rule.

However, the casino proved fair, addressed our questions and paid our earnings in full. Let’s hope they can improve the withdrawal processing speed and reconsider if incremental payments for small winnings are worth all the trouble.

“having troubles with regards to delayed payments”

I am not happy with El Royale with as much as I have spent here I have never once made a withdrawal and their bonuses are below the threshold when paralleling to deposits. My old log in is VTG247

Wow thank you for the heads up. I have been looking for a new casino and reading reviews. This is very helpful.

I have deposited and played in all of this group of casinos in the past. When I have won and made withdrawal request always paid in 3 to 4 days with Bitcoin. One time they split a payment in 1/2 and sent the other 1/2 the next day. I deposited at Red Dog again 2 days ago and requested a withdrawal same day. To my suprise...

Seems to me it was a wait out game they play like other casinos hoping you would get tired of asking for your moneyand count it as a loss. ihave never deposited money in a casino yet not that i have not tried my two visa debit cards get declined i have enough money on them come to find out my bank does not allow deposits...

Seems to me it was a wait out game they play like other casinos hoping you would get tired of asking for your moneyand count it as a loss. ihave never deposited money in a casino yet not that i have not tried my two visa debit cards get declined i have enough money on them come to find out my bank does not allow deposits at online casinos for a law breaker like me lol. so i started looking into bitcoin wallet i got one the other day its a BRD the system seems simple enough was trying to figure out where to get BIT/ BCH for not paying to much in fees. started a download of another wallet BLOCKCHAIN but ran into problem they were not confirming my email every time i would send there link back it was not showing on there side but yet they were pushing me to bye BIT/ BCH so i put it on hold for now until they fix the problem anoybody hav a idea ??? this is my firs time responding on this great site thank you for all the bonus codes im sure the casinos dont like it very much seeing i have not made a deposit yet but i will nice talking to all of you i am from UNITED STATES TEXAS its not easy to play when your own banks against you

El Royale attract many players with lucrative no-deposit bonuses or free-spins. I signed using such an offer. The site looked good and professional and it seemed legit at first sight. I'm actually glad that haven't made a profit back then. Apparently they aren't willing to pay the winnings even of serious depositors easily....

El Royale attract many players with lucrative no-deposit bonuses or free-spins. I signed using such an offer. The site looked good and professional and it seemed legit at first sight. I'm actually glad that haven't made a profit back then. Apparently they aren't willing to pay the winnings even of serious depositors easily. The verifications and withdrawals shouldn't be such a hassle.

Its like they make deposits instantaneous but payouts an eternity..

First of all thank you for giving us the heads-up but more importantly thank you for going out of your way and actually investigating and trying it first end instead of just going by hearsay. LCB you truly are for the players

way too long to get your cashout , and no player should be expected to jump through hoops , and in fact all these casinos should make it as easy as possible to get paid. period

Journey indeed! They did pay out the earnings in the end, but still, one definitely should stay with the casinos that have a good name, pay the players, and respect the players.