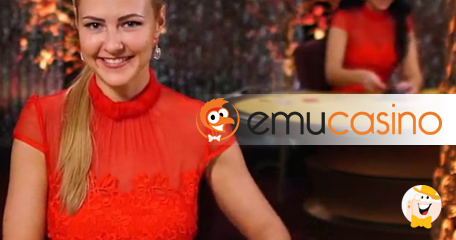 Launched in 2012, EmuCasino has just added something incredibly exciting to its casino! In addition to its already broad collection of slots, casino games, and video poker, the site has just gone live with an entire slew of live casino games, in order to bring that live-action gaming experience to its users. All games have been formatted for desktop, and mobile play.

In total, the casino has launched six live dealer games to select from, all player favorites of course! Complementing the live gaming experience is the fact that players can also interact with live dealers. Among the live games which are currently available, include blackjack, roulette, and baccarat. The new batch of titles are also available 24/7.

The games are powered by Evolution Gaming, which has created a name for itself in the way of live dealer games. It is licensed and regulated under three jurisdictions, including Malta, Alderney, and the UK. As a result, it is quite a popular choice throughout the industry for live casino games.

Evolution Gaming is licensed and regulated under 3 jurisdictions, the Alderney Gambling Control Commission, Malta Gaming Authority and the UK Gambling Commission, making it one of the most regulated providers in the industry to offer Live Casino Games.

In addition to its spectacular listing of games, the casino is also home to a lucrative VIP program, made up of six levels. Players are able to move up the ladder based on the accumulation of points earned from play, with benefits including free spins, bonuses, and even trips!

“formatted for desktop, and mobile play”

I never tried Emu to see game play but I see nic smile :)