Endorphina Celebrates a Decade of Presence in the iGaming Industry 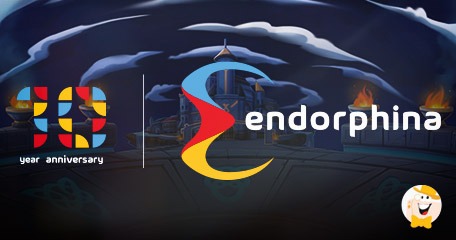 Part of the industry since 2012, Endorphina has quickly established itself as a top-class provider of captivating online slots. This year, the creative gang is celebrating its first decade of presence in the industry, revising all the successes that marked the previous period.

Delivering a couple of dozens of new titles per year, the studio has quickly filled its portfolio with adventures of all sorts. Its wealthy catalog is suited both for those looking for classic stories as well as those interested in exploring something new.

Expressing its gratitude to players, as the biggest support on the exciting journey, officials from Endorphina noted as follows:

“We want to thank you all for your endless support to help bring us to where we are today. We look forward to continuing our legacy and expansion - with no plans of slowing down for the years to come!”

Wanting to show that they are capable of handling all sorts of topics, Endorphina equipped its catalog with all sorts of different themes. Divided into several groups, games are classified by elements they have in common- mystic, fantasy, book, animal, classic, and more.

…were some of the first adventures the studio unveiled, followed by countless works of art such as Taboo, Aus Dem Tal, The Rise of AI, Water Tiger and more. One of the turning points for the provider was 2015 when they rolled out Satoshi’s Secret, tailored for some of the first online-crypto casinos.

The most recently added installments include The Fisher King, a 5x3 video slot with 20 paylines, and a variety of features such as Wilds, Scatters, multipliers, Bonus Pop Feature, and more. A while before that, the supplier enriched the catalog with Cyber Wolf, a Classic Risk Game where players can boost their winnings up to 10x.

Aside from being visually impressive, enhanced with reliable math models and packed with a variety of features, their games are thoroughly tested by GLI and certified by ISO. On top of that, the content is licensed by some of the most rigorous regulators, among which MGA, HGC, and ONJN. At the time being, the company is present in more than 19 regulated jurisdictions.

…the provider’s efforts were crowned with multiple acknowledgments, confirming that their enthusiasm and passion for innovations are recognized. Some of the awards include the categories Developer of the Year, Best Online Slot, The Best Themed slot, and others.

Thanks to all the qualities this forward-thinking studio possesses, it frequently attracts other iGaming companies as a potential business associate. Gamingtec noted that agreement with the studio is an excellent opportunity to “create extra value for our B2B brands,” while SOFTSWISS described the supplier as the “like-minded partner” with which it shares the same passion for cryptocurrencies.

Other strategic partners include the likes of iSoftBet, Ously Games, iForium, EveryMatrix, Slotegrator, and more. Also, Endorphina has a wide network of media associates so players can keep track of all the news and games via many platforms.

“thoroughly tested by GLI and certified by ISO”

Has it been ten years already? During that time Endorphina has become one of the leading providers, I'm sure we'll see a lot more good things from them next 10 years :)

Congrats Endorphina, you’ve accomplished so much! Keep up the great work!