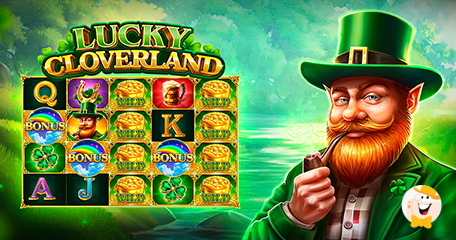 What’s at the End of the Rainbow?

Leprechauns, shamrock, pots o’ gold, and rainbows are often found in online slot games, as they symbolize luck. Since it’s that time of the year when everyone talks about luck (that’s right, it’s the St. Patrick’s Day we are aiming at), we’d like to introduce you to Lucky Cloverland, the newest addition to Endorphina’s rapidly growing portfolio.

Spreading across 5 reels and 4 rows, this Irish-themed slot challenges players to look for a pot of gold coins hidden deep in the woods. The one who manages to convince the cheeky leprechaun to become his/ her friend has the biggest chance to find the treasure.

Have you ever tried negotiating with leprechauns?

Equipped with 40 fixed paylines, Lucky Cloverland by Endorphina is home to all sorts of features. To start with, the pot of gold symbol acts as a Wild, replacing all symbols, except for the Scatter.

Speaking of, when 3 or more Scatter land on the reels, they activate 7 bonus spins during which Extra Wild Symbols appear. During these rounds, a random symbol is selected and assigned the powers of a Wild. Just like the real Wild, it can substitute for all symbols, except Scatter.

Aside from these, there’s a Bonus Pop feature inside as well as Classic Risk Game during which punters can also double their winnings up to 10 times- in case they beat the dealer’s card. However, if the dealer wins any round, a player loses the winnings and the Risk Game ends.

Lucky Lands is a colorful slot game with a ginger girl who follows players through 4 different realms- Fortune Forest, Golden Hills, Happy Valley, and Wealth Ridge. Worth noting is that the girl represents the Wild symbol of the game.

Three or more Scatters activate the free games and prompt the player to pick one of the four modes and have more spins with lower multipliers or fewer spins with higher multipliers. Organized as a 5x3 layout, this game comes with 25 paylines and features a Risk Game as well.

Aside from this vividly painted release…

…players can check out Chimney Sweep. Although not directly connected to St Patrick’s Day, the game is filled with themed symbols, such as the rainbow, horseshoe, four-leaf clover, and more. When three or more Scatter icons occupy the reels, they grant 15 bonus games, during which all wins are multiplied by 3x.

Taking place in Dubai, UAE, from March 20-32, 2022, SiGMA Asia, one of the crucial events, will gather over 5,000 iGaming delegates from all over the world. Endorphina is among them, eager to showcase its numerous achievements. As a small reminder, LCB has been nominated in the category Affiliate of the Year.

Also, Endorphina confirmed its presence for ICE 2022, taking place on April 12-14th at ExCeL London. ICE London is also one of the most massive global gatherings, where leading corporations have the opportunity to speak, share their experiences, and enlarge their networks of strategic associates.

Loving all the St. Patrick's day bonuses and games. Lucky Cloverlands is one of those games that are visually pleasing, an d I love playing them! Hope you enjoy them as much as I do!

I have never doubted that Endorphina will create a special St.Patrick game this year :) Let's hope Lucky Cloverland will bring us more luck since “it’s that time of the year when everyone talks about luck” :)

At the first sight it doesn't seem different from the other St. Patrick themed slots, really... but I enjoy playing them, seems like they are more lucky for me than the "regular" ones :D

I just can't decide which game to try first! There are so many themed games dedicated to this day! I'm hoping today is my lucky day. :)

On the surface, it doesn’t seem spectacular, but with all these features, I’m sure it produces lots of fun. Let’s have a couple of spins and see how it works.