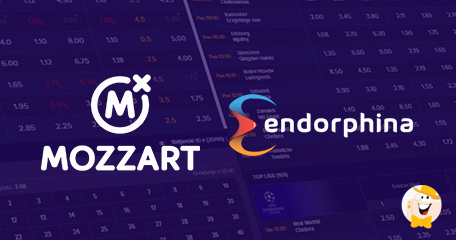 Attending two online gambling conferences this month and releasing two hack-of-a-punch slots has marked a busy April for Endorphina, a dynamic and creative company from the Czech Republic, established in 2012.

Last week, the provider of virtual slot machines and other themed casino products from Prague has entered a new market by signing a milestone partnership with MozzartBet – founder and member of the European Organization for Gaming Law.

Specializing in secure payment options, competitive margins in popular sports, and up to date promotions in the Serbian market, the group is also incorporated in Malta and licensed to offer betting on lotteries within the website, various casino games, including fixed odds and live betting.

Expanding in the Balkans

As the online casino industry in the Balkan region is thriving, Endorphina has shown a lot of interest to join the first iGaming providers in this region. The studio has made its debut in the Croatian market at the beginning of November 2020, reaching new players and showcasing a roster of new and steamy games.

As a clear evidence of growth, the Balkan iGaming market has shown capacity to embrace the world’s leading aggregators, whose presence in this territory increases year after year.

Thanks to the region’s great market potential with increasing liberalization, the Czech-based studio is pleased to announce a new partnership in the neighboring Serbia and kick off a partnership together with MozzartBet.

“We are confident that partnering with Endorphina on this new campaign will bring only positive results. We're looking forward to working with such an established provider,” said Milos Randjic about the agreement, online casino portfolio director at the company which has been active on the market since 2001.

Endorphina is now getting ready, without any doubts, to roll out its versatile portfolio of online casino games, ranging from innovative to traditional themes, as well as the latest titles on the roadmap – Legendary Sumo and Cricket Heroes.

Among the upcoming releases are some of the company’s most recognized projects, such as the stunning Book of Santa, Satoshi's Secret, Twerk, Slotomoji, Chunjie, Taboo and Gemblast.

Aside from reaching new iGaming grounds in Europe and expanding its reach in the Balkans, primarily Croatia and the Serbian market, Endorphina is active at numerous virtual conferences, such as CGS LATAM, Georgia Gambling Conference, SiGMA, SBC Digital Africa, Virtual Spice India UGW Expo 2021 in Ukraine and more.

While participating at these digital conferences, the development company from Prague (CZ) specializes on focusing on 5 key areas such as regulation, tax, compliance, and emerging tech.

As stated by the emerging software aggregator, delivering a high-level standard and staying updated regarding all the recent changes in iGaming is key to crafting unique products and services for the online gambling sector and staying ahead of the competition.

Back in March, the group has signed a content distribution with Aresway and LuckyDays, creating a new opportunity for the players and operators in Cyprus and Italy.

“a busy April for Endorphina”

So glad to hear this! I love Endorphina's games and this is a great deal for both parties!

This is great news for the players, MozzartBet and Endorphina will definitely make a great list of games.

MozzartBet is one of the largest casinos on the Serbian market, and they will certainly benefit from the cooperation with Endorphina, their players will enjoy

Definitely, their engaging portfolio will be immediately tested by MozzartBet players. I must admit they keep expanding and producing, no doubt about being a well-recognized provider. Keep up great work :)

They are a young company but I do appreciate the effort to stay at the top and leave an impact on the industry and players. Endorphina has some really cool games to be honest.