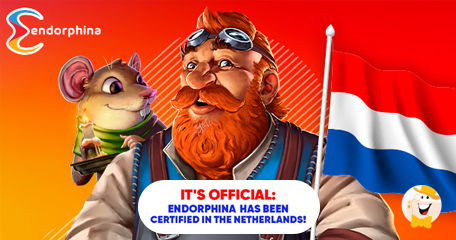 After Lithuania and Denmark, the Czech-Based Provider Enters Netherlands Market

The month of February has been very busy for Endorphina. The company entered Lithuania and Denmark, received ISO 27001 certification and released a new Asian-inspired slot – King of Ghosts.

However, at the end of this month, the Czech-based software provider continued to march forward into new sectors and joined the recently regulated Netherlands market!

After becoming certified to launch in the country, Endorphina had to pass thorough assessments and ensure that its games meet the quality and security standards. As a result, players in this jurisdiction can soon expect to see some of its top games, such as 2021 Hit Slot, Hell Hot 100, Rooster Fury, Joker Stoker, Fruletta and more, awaiting further certification to go live in casinos across the Netherlands.

When it comes to entering regulated markets, the 2021 Remote Gambling Act of the Netherlands has been recognized as a forefront of regulatory initiatives across the iGaming industry. Endorphina is proud to become part of it after entering Denmark, and receiving ISO 27001 certification for information security management.

According to Jan Urbanec, CEO at Endorphina, the regulated market of the Netherlands has already proven its attractiveness, as many leading brands set their foot in the country over the last few months, including Spearhead Studios, Relax Gaming, Microgaming, Red Rake Gaming, 1X2 Network, Stakelogic and others.

Urbanec is convinced that players in the Netherlands will be thrilled with Endorphina’s portfolio and invites them to check out some of the top performing games going live this week!

Among the latest editions is a new Asian-inspired slot that will take you to the mountains of faraway China. It is called King of Ghosts and this new 5-reel, 3-row, 20-payline slot combines visually stunning graphics with plenty of ways to win big thanks to traditional Chinese symbols, old coins, wilds, scatters, free spins with the expanding wild feature as well as some random multipliers.

The studio from Czechia launched a premium collection of games with the hot gaming operator allowing it to enter a competitive market and also reinforce its commitment to providing the best entertainment experience.

Some of the first titles to go live in this online gaming sector are Hell Hot 100, 2021 Hit Slot and Joker Stoker.

The Lithuanian market registered a 44.5% year-on-year growth in 2019 alone, which is a 13.1% increase in the industry's combined GGR. The total revenue in the iGaming sector is projected to reach $1 million USD in 2022.

I agree with you guys, it seems that this market is really something big! Congratulations to this studio on a big step forward.

As of lately, everyone's jumping on that Netherlands train. Who can blame them?! It's a great market and you'd be crazy to miss a chance like that. Congrats to Endorphina on certificates and new openings. Hope you guys bloom there.

Seems to me that eeeverybody’s trying to get a piece of this market, as if it’s a promised land. They make really good games though, so I reckon players around the country will be thrilled to give them a go...